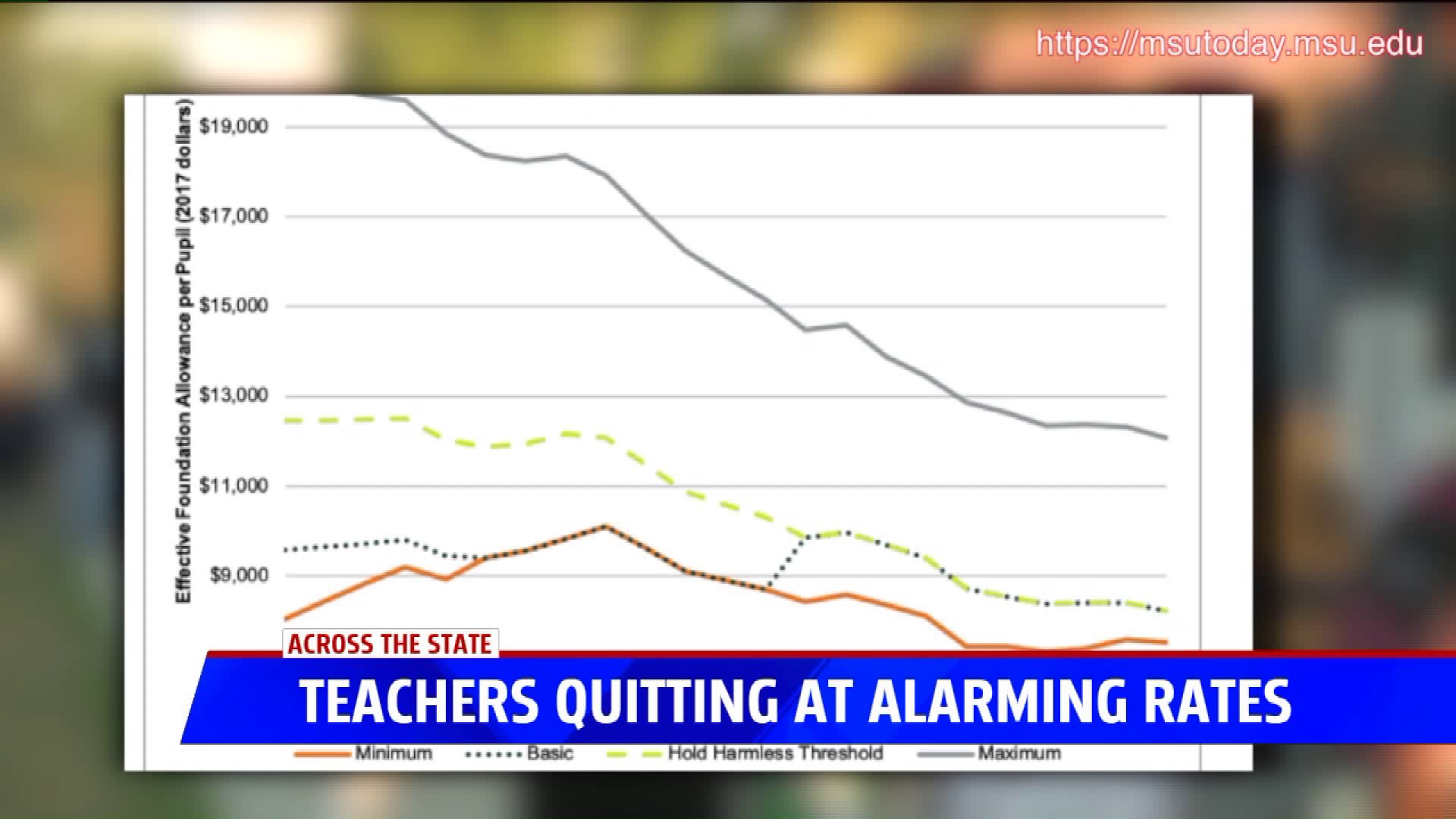 LANSING, Mich. -- Michigan teachers say they are worn down and under paid.

Sources say we're facing a talent shortage and teachers are quitting at an alarming rate. Michigan isn't alone. Protests in other states have shut down schools over low pay and poor conditions.

Governor Gretchen Whitmer is calling it a crisis. In her State of the State address, Whitmer said educators are not failing us, we are the ones failing them.

"Our teachers are not broken. It's our system that's broken," she said.

There is a teacher shortage in our state, but it's not so much that teachers are quitting at any chance they get.  The state is actually having trouble finding and retaining younger teachers.

"At the end of my career, I was easily putting in 10 hour days physically at school and couldn't get anything done," said Liesje Franken, a former teacher at Waukazoo Elementary in Holland.  "It's like a sponge. After a while, there's nothing left to squeeze."

After 28 years of teaching at Waukazoo, Franken left education to focus on her health. Others, we're told, are leaving the profession for other reasons.

"Part of what's happening here is you had a lot of individuals during the great recession chose not to retire, because they lost half of their retirement due to the recession," said John Helmholdt, the spokesperson for Grand Rapids Public Schools. "People delayed retirement, and now there are individuals who should have retired five to 10 years ago are now retiring, and you have two groups of retirees happening at the same time."

But the vice president of the Michigan Education Association, Chandra Madaferri, says most of the teachers leaving are coming right out of school.

"I think if we look at the teachers that are quitting, it's the early educator," Madaferri said. "It's the one that's coming in. In the first five years, they're very disillusioned. It's not what they thought it would be, and they're looking for other options. Can they support their families? Can they pay off their debt?"

In the first ten months of 2018, public educators quit at an average rate of 83 per 10,000 a month, according to the Wall Street Journal citing the Labor Department.

According to the MEA, one in five Michigan teachers leaves the profession in their first five years. However, we're told veteran teachers aren't happy either, citing small raises, increased class sizes, and public disrespect.

"If you look at school districts that are struggling, the parents struggle to feed kids, [there's] drugs, crime and teachers are not paid well there," Madaferri said. "A lot of substitutes are holding those jobs because people don’t want to work in places like that with lack of support."

And this lack of support Madaferri is talking about is having what some consider detrimental effects. Currently, FOX 17 is told there aren't enough certified teachers to fill positions, creating open positions across the state.

Grand Rapids Public Schools is sitting on about 40 vacancies.

"It seems like a lot, certainly, but that number is constant throughout the year because you have retirements, individuals on family medical leave, maybe a child on the way, so it's not uncommon," Helmholdt said. However, he mentioned what is also common is the district's struggle to find substitute teachers.  He says that these vacancies force principals to play teacher and for classes to be combined.

"GRPS, along with districts across the state and nation, are feeling the pinch of this teacher shortage that's happening," he said. "It's been this constant attack on the teaching profession."

Madaferri has traveled across Michigan, examining what's going on inside of the classroom. She recalls seeing upwards of 40 students in one middle school class. That large of a class size means less one-on-one attention for kids, and Helmholdt says it's having a direct impact on education outcomes in our state.

"It means combining classes, principals playing teacher for the day, so you can imagine how challenging that is," Helmholdt said.

For a profession that has to be "on" all of the time, teachers are starting to feel "off," overworked and often blamed.

Madaferri says the number one issue is the lack of funding, saying, "20 years ago, we had not only the highest funding in all of the Great Lakes but the highest student performance. Now, sadly, we're at the bottom."

"They start to realize the days get longer and longer and think, gosh, I can’t seem to get reading scores where they're supposed to be. I’m at school 10 hours a day and can't get anything done, and I think that's where it gets disheartening," Franken said.

State Senator Winnie Brinks says teachers feel under assault. They don't feel supported, morale is low, and pay and benefits have been flat for more than a decade.

"Teachers are talking about how this isn't just about money. It's about valuing educators and about putting kids first, and teachers are feeling this system is letting them down," Brinks said.

Michigan State University released a new report that shows K-12 funding fell 30 percent between 2002 and 2015 after adjusting for inflation. That same report found funding for Michigan Public Schools has fallen more sharply than any other state in the past 25 years.  In the past 25 years, Michigan has seen the lowest growth in the K-12 education spending of any state in the nation, according to Gov. Whitmer.

Madaferri says not only were millions cut from public education around 2011, but there was also a lot of legislation passed that increased the use of standardized tests, and more testing means more pressure for teachers. She explains that's when she felt she was losing her academic freedom, and more pressure for lower pay is becoming less and less appealing for potential teachers of the future.

Helmholdt and Madaferri say they are seeing fewer students enrolling in colleges of education.

"There's been a 50 percent reduction in students choosing to become a teacher because people are saying don't do it," Madaferri said.

Local numbers show it's true. According to data we received from Grand Valley State University, undergrads enrolling at GVSU's School of Education dropped by nearly 400 students in the past five years.

"We need to have teachers feel respected again. We need to bring class sizes down," she said.

But Sen. Brinks says it's not that easy. "Budgets are difficult because there's more need than there are resources in most cases, so we're going to have to come up with a plan to find a sustainable way to get to where we need to be to support students," Brinks said. "It comes down to priorities in our budget. There are things in our budget that could be cut."

Brinks says Michigan Democrats introduced a package of bills during the last legislative session in an effort to help teachers. Some of the solutions in the bills include:

Brinks says the Republican committee chairs refused to hold a hearing on the bills.

FOX 17 reached out to a Michigan Senator Aric Nesbitt, who replied, “Quality teachers prepare our students for a successful future. Education funding is an important priority and continues to reach record levels, and we remain focused on supporting our local schools. We want to make sure the best teachers are paid the most."