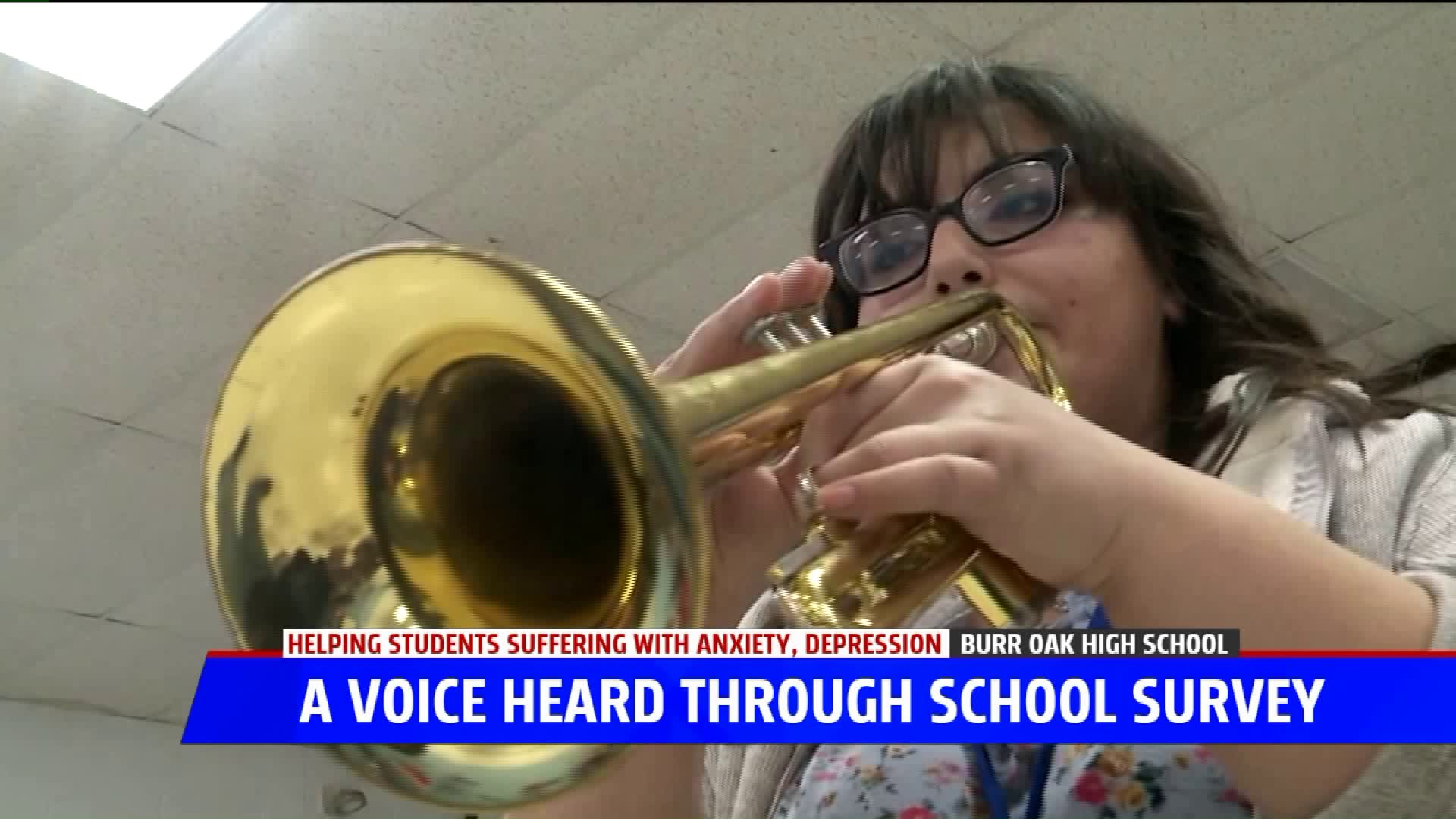 BURR OAK , Mich. — For Keydilee Rodriguez, music is more than just her passion. She has been playing the trumpet, the french horn, and a little bit of piano for years, and over time it has become therapeutic.

“Music, it’s helping me get through my depression and my anxiety,” Keydilee said during an interview at Burr Oak High School, where she’s a senior. “I listen to instrumental music, especially brass, because it’s relaxing.”

Music calms her during panic and anxiety attacks, she said. She has learned to use music as a coping tool when dealing with life’s challenges.

“When I was a child, I went through a lot of abuse, sexually, physically and emotionally, and not anyone knowing about it,” Keydilee said.

Keydilee kept it all to herself for years, she said. However, she chose to speak up about it in December when she took an annual survey at school that asked questions on a range of topics from literacy to bullying.

“They came around with a sheet of paper, saying if we need to talk, just write something,” Keydilee said. “I just said I was having thoughts, and that’s when people came in and started talking to me.”

Keydilee wrote that she was having thoughts of suicide. She said it was triggered after a classmate took his own life.

“Our kids suffer from so much baggage that people don’t know about,” said assistant principal Kris Owens. “And not just Burr Oak’s kids, but kids in general.”

After the student died, Owens made sure to include questions about mental health, she said. By Christmas, she tallied up the results and learned that 30 percent of the high school students at Burr Oak struggled with depression, anxiety, and thoughts of suicide.

Owens was alarmed. That’s the highest number it’s ever been.

“I care for them,” said Owens about her students. “It is a little bit of I guess anxiety on my part worrying like ‘What are we going to do for these kids? How are we going to make it better?’”

Owens said she would like to see more counselors in schools because she believes talking about one’s pain and struggles is medicinal. Keyidlee found that to be true in simply talking to her.

“She actually cares about everyone, and from a teacher, that’s different,” Keydilee said about Owens. “I don’t see her as a teacher. I see her like a mother figure, and she would just be there, listen, and help me out.”

Keydilee said she has opened up to Owens about her past: growing up in North Carolina without her mother and the pain of not living with her dad. “My dad got deported in 2017 while I was working at a summer camp,” Keydilee said. He didn’t say good-bye, she remembered. He notified her via text message that he had been deported. She was overwhelmed with sadness and it triggered her depression, she said.

“As soon as my dad left, that was like the only person that could protect me from everything,” Keydilee said. “And as soon as [he] left, I was all alone, in a way.”

Keydilee said she never confessed to her father about the abuse, but she always felt protected around him. She said she’d been abused for years by a family member, and didn’t know how to escape it.

“I was lost. I was completely lost. I didn’t know what to do. I didn’t know how to act,” Keydilee said. “I would go to school and just became really depressed and started hurting myself and wanting to die really bad.”

Keydilee didn’t think she’d live past the age of 19, she said. She spent years going in and out of hospitals and saw a number of different psychiatrists and counselors. It got so bad that in September 2018 she took a handful of pills in an attempt to take her life. However, her brother walked in at just the right time.

“He walked in and saw me, like all the bottles everywhere,” Keydilee said. “Then I just broke loose and told him that I was being sexually abused.”

It was around this same time that Keydilee was texting her mom, who lived in Michigan. She told her mom what was happening and that she needed help. Her mom suggested that she live in Michigan with her. Within weeks Keydilee was in Burr Oak.

“For her first day, she was very quiet. She blended in quickly,” Owens said. “When a new kid comes in, you want to make them feel welcomed, but you don’t want to also make them stand out if they don't want to.”

Keydilee said that in the beginning, she felt like the awkward kid. However, she quickly learned that everyone was like family. And when she opened up about her past, people cared.

“Like the teachers, everyone, and knowing that people actually cared about me, even if they don’t know me, actually made me feel really good,” Keydilee said. “It’s a small community, but it’s an amazing community.”

Now Keydilee says she sees the "light in the darkness." Since taking the survey, she continues to meet with counselors. Her mom provides a calm and supportive atmosphere at home, she added. And she dreams of teaching music at Burr Oak.

“I really believed that I would die before the age of 19,” she said.  “But after everything, therapy and friends helping me out, I feel like I’m gonna live, grow, have a family.”