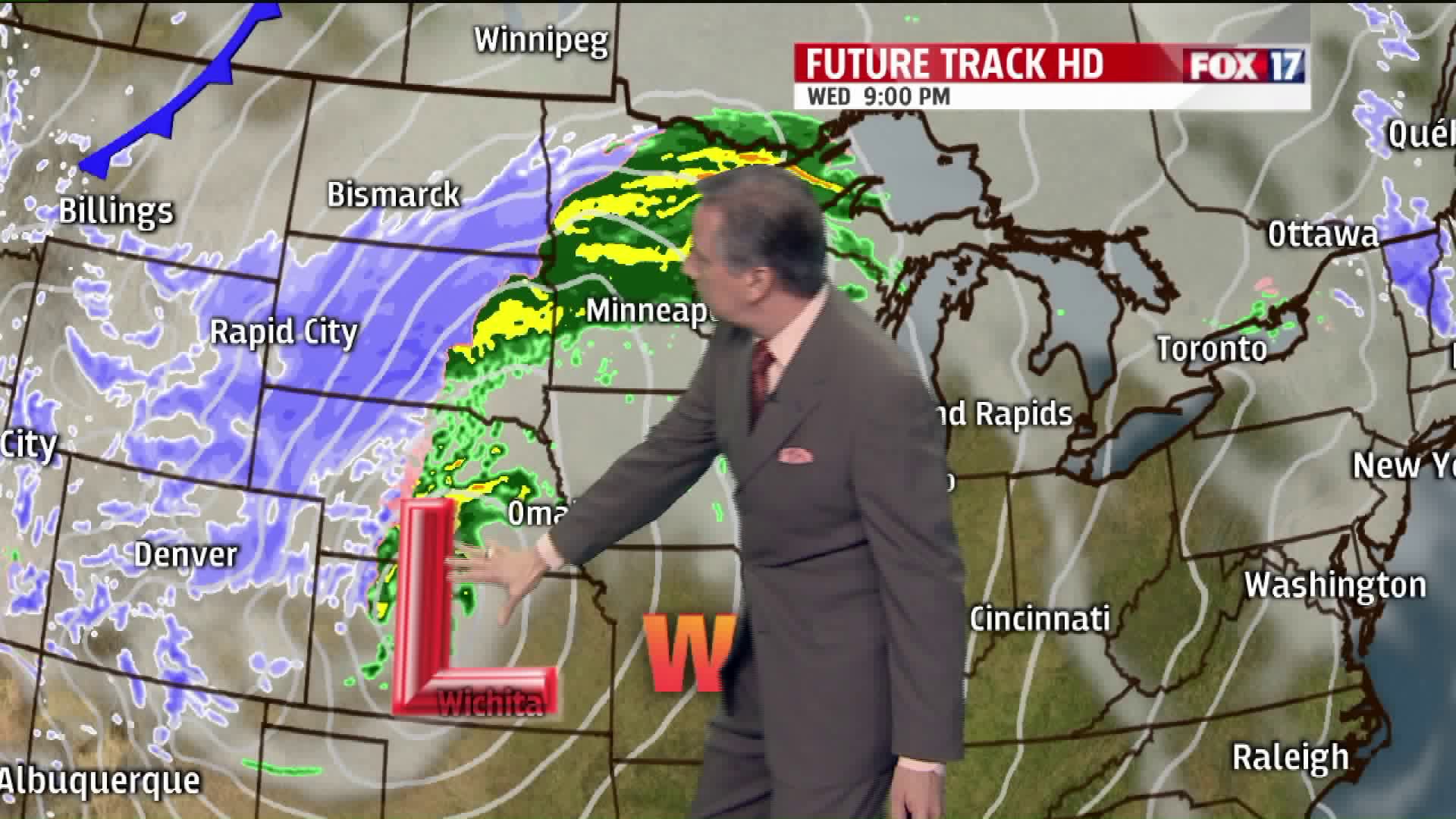 WEST MICHIGAN -- It's not often that we get severe thunderstorms in the middle of March over the FOX 17 viewing area, but it's a possibility we'll have to watch for Thursday afternoon.

We talked about the possibility of severe weather coming our way yesterday (see this previous article written by Chief Meteorologist Kevin Craig), but now the threat is looking higher. The Storm Prediction Center (SPC) has now upgraded most of the area into a Slight Risk for severe thunderstorms and our northern communities are now in a Marginal Risk for severe weather which is also an upgrade over yesterday:

We're currently tracking a developing area of low pressure in eastern Colorado. This low will strengthen Wednesday and cause strong to severe thunderstorms to develop off to our west in the Plains:

The round of storms that gets produced late Wednesday off to our west will move through West Michigan in the wee hours of the morning Thursday:

This first round of storms will be in a weakened stage when they move through here, but could produce locally heavy rainfall and river flooding. The amount of rain and residual cloud cover left by these storms will largely dictate how much severe weather we see in the afternoon Thursday.

Lighter amounts of rain and less cloud cover will favor a more potent line of storms moving through in the afternoon hours. That's because warmer conditions at the surface combined with cold air aloft would mean a less stable atmosphere. Bottom line: We'll have to monitor the amount of sunshine and warming we see tomorrow morning before that second line of storms develop.

As of right now, Future Track HD has temperatures getting into the 60s in most areas along and south of I-96, which should be adequate enough for severe weather:

With a south wind as one can see by the light green streamlines moving across the state and Lake Michigan, lake cooling and associated stability won't be much of a limiting factor in severe weather.

The greatest threat with Thursday's thunderstorms will be straight line winds in excess of 60 mph, but isolated tornadoes are possible as well. In fact, the atmospheric conditions suggest that a stronger tornado is possible:

A cold front moving through late Thursday afternoon will bring the severe threat to an end, and colder temperatures will follow for the end of the week. Be sure to watch FOX 17 for further updates!