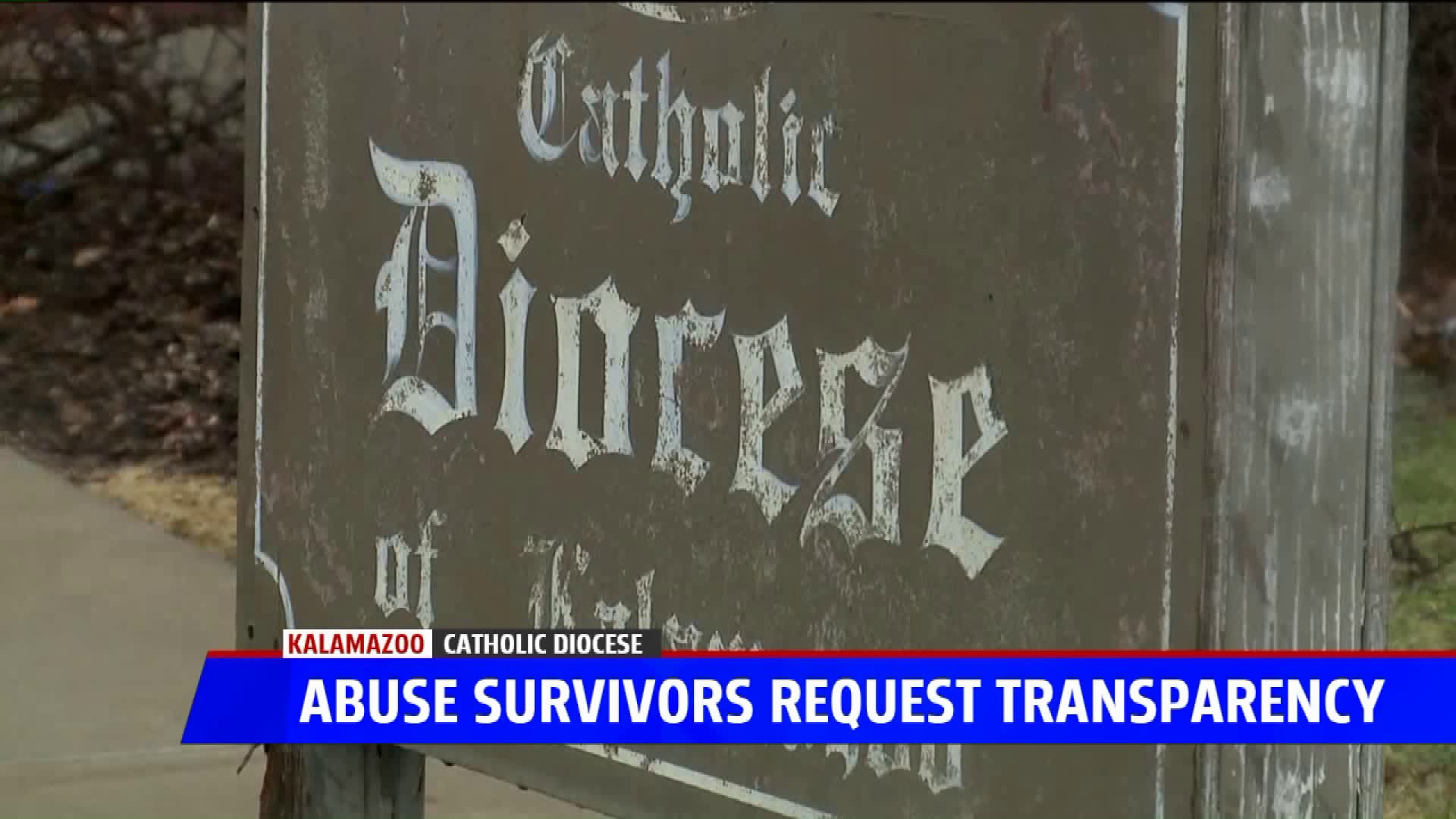 KALAMAZOO, Mich. — Ann Phillips Browning said she was on social media Thursday morning when she saw that the local SNAP chapter was going to hold a press conference in front of the Catholic Diocese on Westnedge Avenue at 10:30 a.m. The group was requesting the diocese publish the names of six priests accused of sexual assault.

Browning immediately got in her car and drove five miles in the rain to the presser.

“I thought, that’s interesting I have a list of 12,” Browning said during an interview after the presser. “I wanted to see who their six were and where they came from.”

Browning said she isn’t a part of  SNAP, the Survivors Network of those Abused by Priests. However she supports their mission considering she is a survivor herself.

“I want accountability,” Browning said. “I want every offender to be tracked [and] to be followed.”

It’s what she does with her own offender, Browning said. She stated that every once in a while she googles the priest’s name who she said abused her years ago to see what he is doing now.

“My abuse started when I was 15,” Browning said. “I was volunteering down at Benton Harbor at St. John’s Catholic Church on Saturdays as a receptionist.”

It was there where she said a priest abused her. She said the “grooming “ began when he rubbed her shoulders and bought her gifts. Then one day it turned sexual and it continued for almost two years.

Browning said she left the Catholic church a few years later when she started having panic and anxiety attacks. She has since gone to counseling and a trauma recovery program which she said helped her immensely.

“I’ve been healing ever since,” Browning said. “I got my degree as a social worker and I’m now doing counseling for women that have been abused.”

She’s also filed a police report in Benton Harbor, she said, signing an affidavit which police told her would help her case. However, because the priest went overseas the statue of limitations no longer applied.

It was around that time that Browning asked the bishop at the Kalamazoo diocese to put his name on the its website so that people would know what happened.

“It’s particularly terrible with a priest because you believe that they change water and wine into the blood of Christ,” said Ruhl who was at the presser as well. “So that when they tell you that they want you to do something sexual with them, you think ‘well, this must be alright.’”

Ruhl said he attended the meeting to show support because his wife had been sexually abused. He said that she was abused when she was 17 years old while living in Chicago. However she didn’t open up about it until 2004.

“It’s horrible because we were really devoted Catholics,” Ruhl said. “We gave a lot to the church. We volunteered with the church. And all of a sudden, as my wife said, ‘we don’t believe any of you guys.’”

Immediately after his wife stated that she had been abused, they both left the Catholic church.

FOX 17 reached out to the Kalamazoo Diocese for a comment and they sent a statement which stated in part:

“The Diocese of Kalamazoo remains steadfast in its commitment to promote greater protection and safeguards of all people, particularly for children and vulnerable adults ... Information on clergy highlighted by SNAP today has been publicly available for years and, in most cases, reported on by the media. As we stated previously, the Diocese has and will continue to cooperate with the Attorney General’s investigation.”

However, Browning and SNAP believe this is not enough. They said transparency and a published list of accused priests and other clergymen will be most effective.

“I still obviously get emotional, you know, when I remember it. It still hurts,” Browning said about the abuse. “But I just want other people to know to encourage other survivors to step forward and get help because there is hope for recovery.”