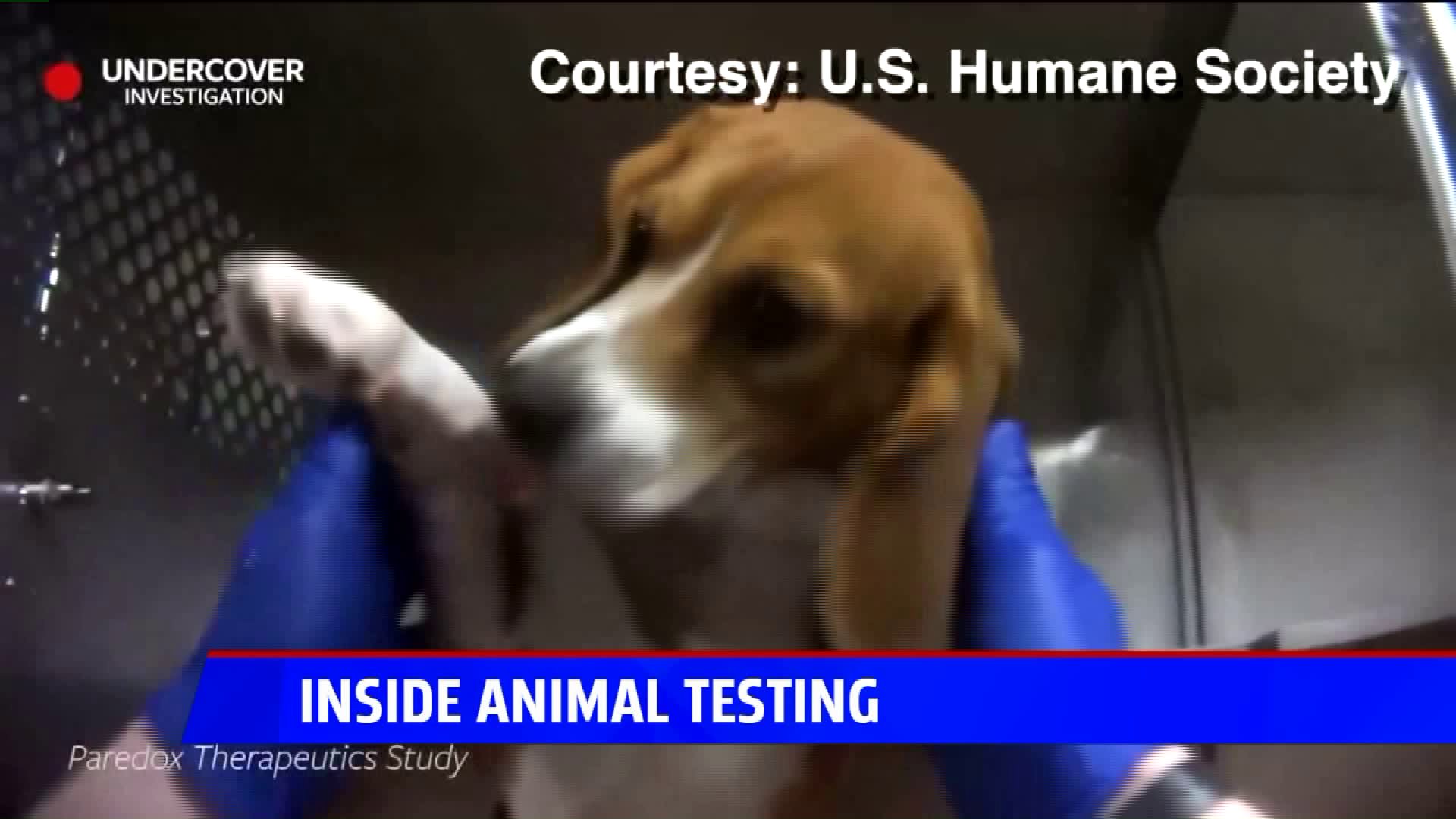 ***UPDATE: The Detroit Pit Crew Dog Rescue posted on their Facebook page that Corteva has reached an agreement with the Humane Society to rehome the dogs. The statement said in part:

“We fully appreciate the concern for the well being of the dogs and we take their rehoming very seriously. Finding caring, safe homes for all the dogs in the study has been our priority and we are pleased to have reached an agreement with the Michigan Humane Society (MHS) to rehome the animals.”

MATTAWAN, Mich. — On March 12, the Humane Society of the United States released video of beagles being force fed pesticides via a feeding tube at Charles River Laboratories.

The video was part of an undercover investigation, the society said in a statement. It’s since gone viral, gaining over 160,000 views on YouTube and sparking national outrage.

However, not everyone was shocked.

A man who used to be employed at the facility when it was under MPI's ownership said the practice is common.

“They shove it down the throat and they inject it into their stomach,” the man said. “That is common practice in animal research.”

The man, who asked not to be identified, said it’s called an oral gavage. He said if the animals regurgitated it, the practice would be performed again.

He was aware of this type of testing happening on more than just dogs. When he worked at the facility there were “4,000 rats, 800 monkeys, (and) maybe 1200 dogs.” They were tested on different kinds of products and drugs by any number of companies.

“They’ll do the study maybe six weeks, maybe two years. It all depends,” he said. “Then along the course of that some die, some have issues, some develop sores.”

And some were necropsied, he said.

Necropsy is what the Humane Society was fighting against. On March 18, they released another statement saying that Corteva Agriscience, the company behind the testing and a division of Dow Agrosciences, agreed to stop testing the dogs. Additionally, they asked Corteva to partner with them in giving the dogs a safe home.

By Tuesday, the Humane Society said the dogs had not been released.

The man said sometimes releasing animals is too dangerous.

“You can’t just take an animal that’s been exposed to a drug that you know nothing about and release it into general population,” he said. “It’s just not going to happen.”

He added that not all the practices at the facility were bad. He recalled a feline study where the cats were adopted by staff members afterwards.

Veterinarians were always on-call, and the staff had to follow strict rules when handling the animals. If they defied them, an investigation was launched and people were sometimes fired.

“There are some there to just collect a check and they don’t care,” the man said. “There are other people there that do care. They care about the animals and that’s why they are there.”

Charles River expressed the same sentiment in a statement they emailed to FOX 17. It reads in full:

"The survival rates for major diseases are at an all time high thanks to the discovery of new drugs. Our work is an essential component of the research that has led to these discoveries and is required by the FDA. Charles River has played a vital role in virtually every medical advance for humans as well as animals.

Charles River has a deep commitment to animal welfare and we make every effort to exceed national standards for the care of the research models under our stewardship. In addition, Charles River is firmly committed to the 3Rs (Replacement, Reduction and Refinement) to help limit the number of animals used in research."

The Grand Rapids for Animals group has scheduled a protest for Friday March 25 at 2:30 p.m. at Charles River.

Ultimately, the man hopes that the company will be more transparent in the future with their practices.

However, the tests will continue he said.

"It won’t matter whatever news release that they come out with. They’re still going to do animal testing. That's just the way it is," he said. "They won’t stop. Some of the work they do is good. Some of it’s questionable."