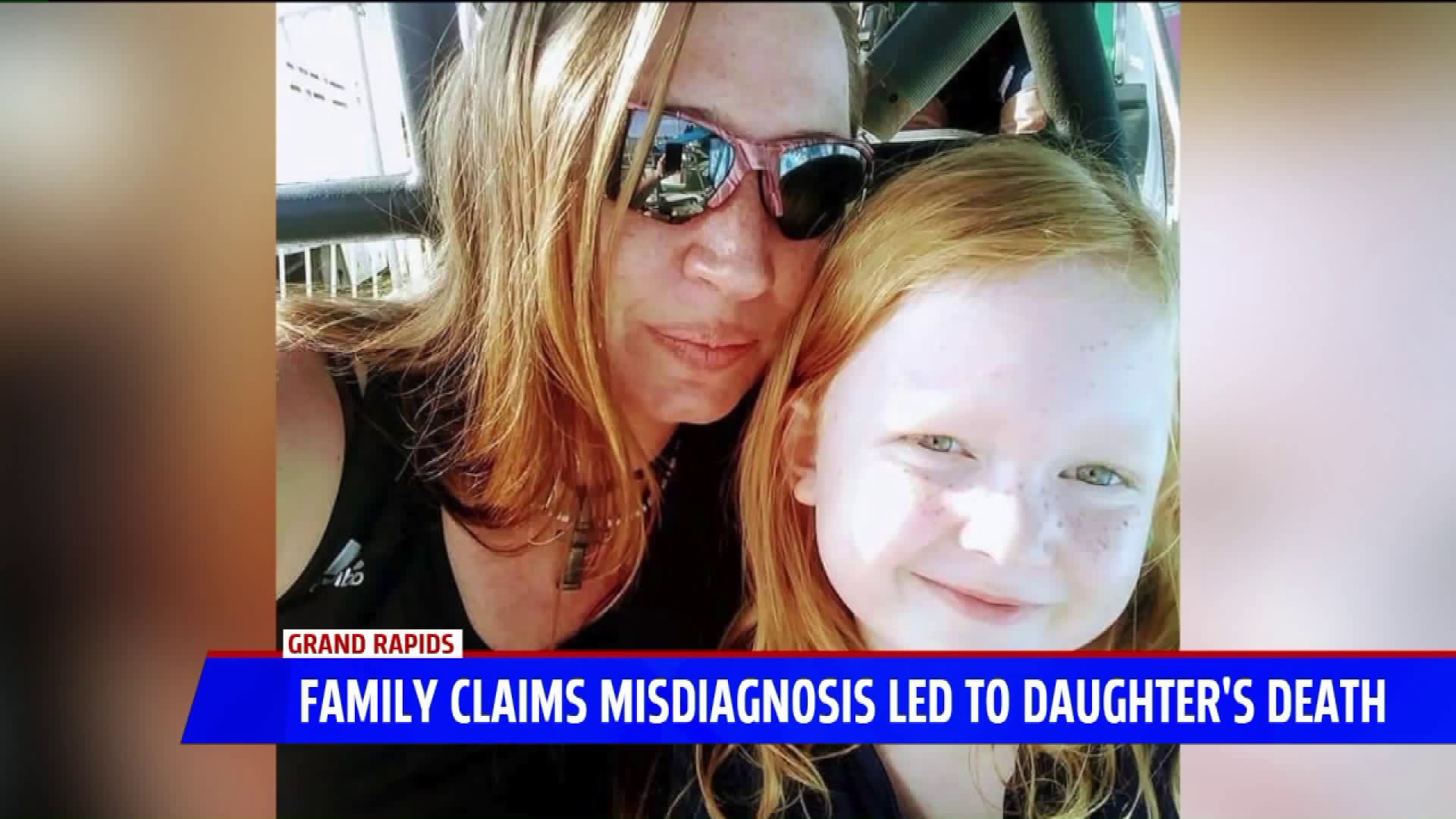 WAYLAND, Mich. — A family is looking for answers after losing a 6-year-old girl to leukemia.

Her mother says they received the leukemia diagnosis just two days before Jasmine passed, and her daughter’s death could and should have been prevented if doctors listened to the family’s concerns and ran tests to reveal Jasmine’s true symptoms.

The family says the issues started with her primary care doctor at Ascension Borgess in Plainwell.

"She had been sick for a while, with flu symptoms on and off, throwing up with high fever, and I kept taking her and they kept saying it's the stomach virus, that little kids can get multiple stomach viruses,” said Carrie Pease, Jasmine’s mother.

"This last time, I was like ‘you guys can't keep telling me it's a stomach virus,’" she said.

Peace says Mercy Health finally told her the issue could be appendicitis or a ruptured appendix and had her take Jasmine to Helen DeVos Children’s Hospital in Grand Rapids.

“Instead of reassessing her and doing blood work first or anything … (they) immediately did that CT (scan) with contrast and it actually made her kidneys worse,” said Ashley Pierce, Jasmine’s aunt.

While waiting for a surgeon to arrive, the family learned the true diagnosis.

“The doctor comes in and sits right here. So literally Jasmine's between us, and he tells us she's got leukemia,” Pierce recalled.

Looking back, her family says she had all the symptoms.

"All signs of the most common cancer in children,” Pierce said. “Why was it missed?"

Notes from a physician assistant at Borgess mentioned Pease’s persistence that something more was going on. Now, the grieving mother is bearing the guilt.

“I should have told them to do that blood test,” she says.

Her family says Jasmine was given medicine that ended up causing a blood clot in her brain. After a surgery to relieve pressure from Jasmine’s brain, the family says they were told nothing else could be done.

"Either she was going to pass away in Carrie's arms or on the table, he pretty much said,” Pierce said. Pease wept, “So I had them take off all the tubes, and I got to lay with her."

Now, the family is hoping their story can help somebody else.

“Carrie just wanted to get Jazzy's story out there. So maybe it could help another kid. Ya know, or maybe make other doctors... like maybe listen to the parents more,” Pierce said. "They know when something's not right."

Each medical facility provided the following statements regarding Jasmine’s death:

The family has created a GoFundMe to cover funeral and medical expenses.