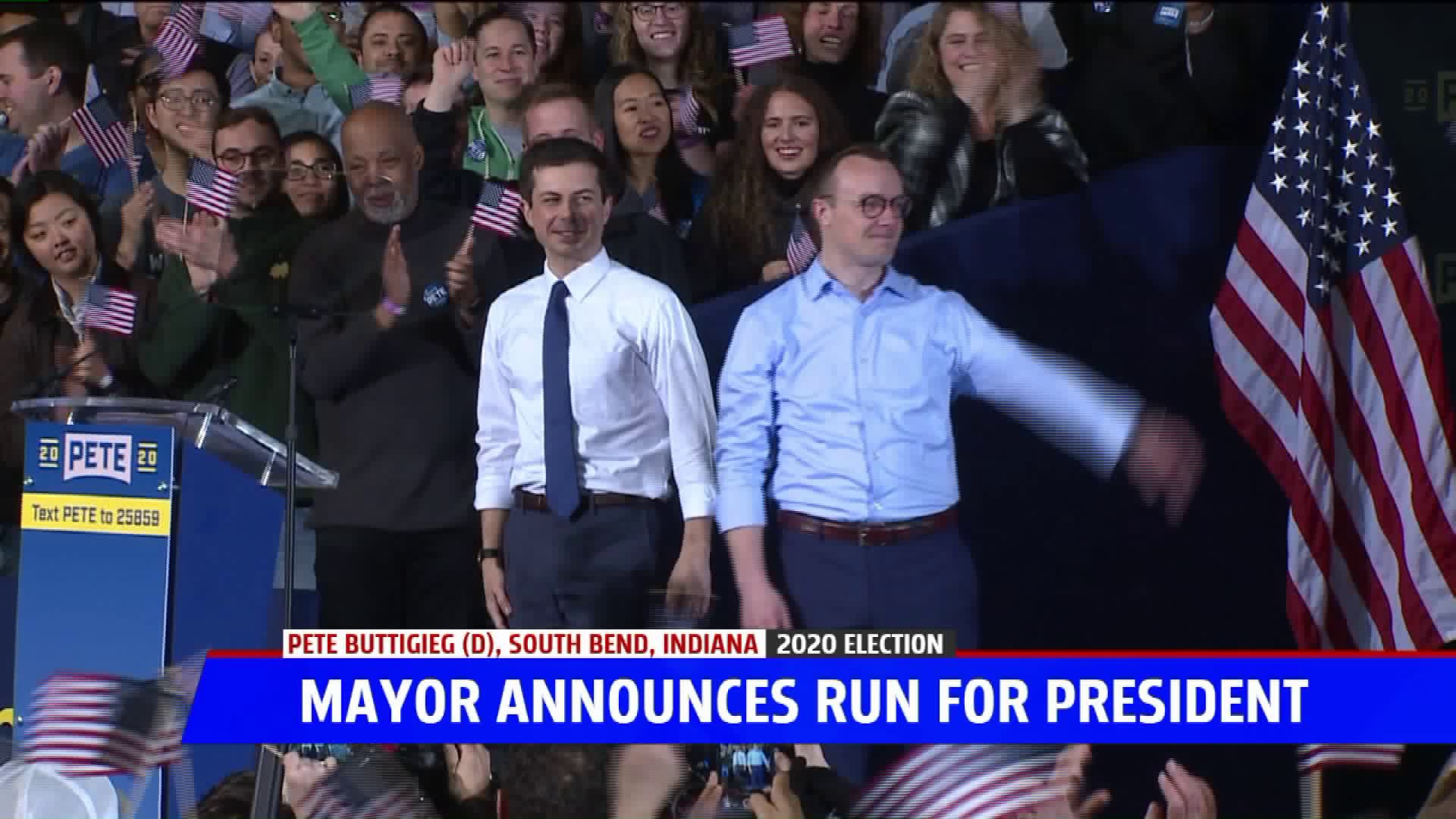 “I’m here to join you to make a little news," Buttigieg joked before making the week's most predictable political headline.

In a crowded democratic field of 18 candidates, Buttigieg is already ranking third in Iowa and New Hampshire , according to recent Monmouth and Saint Anselm College polls.

If elected, 37-year-old Buttigieg would be the youngest president, the first to go from being mayor straight to the Oval Office, and the first openly gay president.

Buttigieg doesn't shy away from acknowledging these potential presidential firsts.

“I recognize the audacity of doing this as a Midwestern millennial mayor," Buttigieg said to the crowd after thanking his husband, Chasten Buttigieg for his support.

Buttigieg has been the mayor of South Bend since he was 29 years old and says he hadn't always had his sights set on the White House.

“Up until recently, this is not what I had in mind, either, for how I was going to spend my eighth year as mayor and my 38th year in this world," Buttigieg said. "But we live in a moment that compels us each to act.”

Buttigieg argues his young age is an asset in this race as his generation faces new challenges.

The rally was moved inside due to inclement weather. Local police tell FOX 17 they estimate 3,000 people were inside Studebaker Building 84 and thousands more were outside in an overflow viewing area.

“It’s a little cold out. It’s a little cold inside, too, but we’ve had it with winter. You and I have the chance to usher in a new American spring," Buttigieg said, embracing the metaphorical setting of the once abandoned factory as Democrats compete for Rust Belt votes.

Many in the crowd traveled long distances to see Buttigieg make his announcement. Ben Eden, who lives in Washington D.C. says he was first in line at 6 a.m.

“I drove with my mom for 10 hours to see Mayor Pete just give a once-in-a-lifetime experience for me and thousands of other people," Eden tells FOX 17. “This is feeling like the dawn of a new era. I don’t care if Pete is 37 or 337, he is speaking to everyone in the room and beyond and I mean, I have goosebumps.”

Also in the room were people who call South Bend their home and hope to see their mayor become their president.

Kate Fulnecky tells FOX 17 she plans on voting for Buttigieg in the Democratic Primary.

The mayor avoided directly attacking President Trump but made clear he wants to change the current political dialogue.

“The problem is that they’re telling us to look for greatness in all the wrong places because if there’s one thing that the city of South Bend has shown, it’s that there is no such thing as an honest politics that revolves around the word ‘again,'" Buttigieg said.

While making a call for bipartisanship, Buttigieg got personal, drawing on his military experience in Afghanistan.

“The men and women, the soldiers and sailors, airmen and marines and civilians who got in my vehicle, they didn’t care if I was a democrat or a republican," Buttigieg said. "They cared if I’d selected the route with the fewest IED threats, not whether my father was documented or undocumented when he immigrated. They cared if my M4 was locked and loaded, not whether I was going home to a girlfriend or a boyfriend.”

Buttigieg says his campaign is centered on principles "simple enough to fit on a bumper sticker: freedom, security and democracy."

The Democratic presidential hopefuls will be in Detroit this summer for two nights of debate.