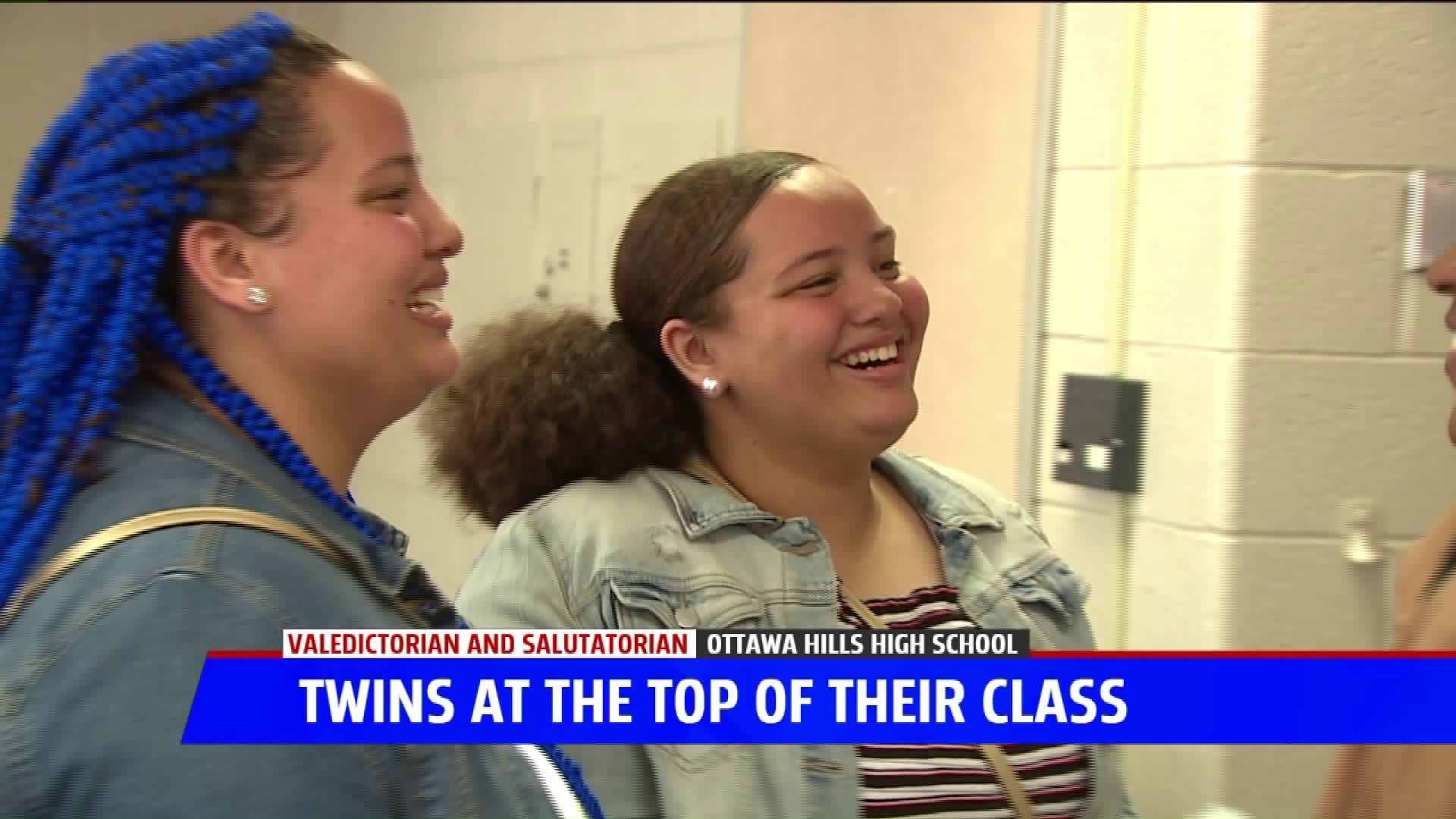 GRAND RAPIDS, Mich. — Twin sisters who are a month away from graduating from Ottawa Hills High School recently learned they will be doing it as valedictorian and salutatorian.

It would seem things would get competitive for twin sisters who have nearly perfect grades, but for 17-year-olds Syena and Taina Moore, who go by Sy and Tai, there is too much at stake to do anything other than lift each other up.

Sy earned the top grade and Tai is a close second place. It's an achievement that Sy set her sights on four years ago when she realized she needed to make a change.

"I used to have a very bad attitude problem," Sy told FOX 17. "I was very angry and I was told like, I wasn’t gonna make it far, so I pushed myself to become a better person.”

Around that same time, Tai, who was already a good student, wanted to step up her game. She says her sister was always there to encourage her.

“When I had the 3.5, she always told me that I could still get up there and I could you know, go be what I wanna be," Tai says.

They took no shortcuts but their academic success had a lot to do with another set of twins: DeLaney and DeLacey Yancey, who are Ottawa Hills alumni and teachers for Grand Rapids Public Schools.

The four met on a tour of historically black colleges and universities. The Yancey's were chaperones for the Moore's student group. They all agree that they felt an immediate bond.

“We were just telling them, ‘We’ve been been here before. We can help you, so just let us know if you need anything,'" DeLacey says.

DeLaney and DeLacey say they saw themselves in the girls. When they were students at Ottawa Hills, they graduated fourth and fifth in their class.

As it turns out, Ottawa Hills has a history of twins making the top grade.

“That’s been kind of a tradition here," says John Helmholdt with Grand Rapids Public Schools. "We’ve had several situations here where the top classmates were twins and they’ve partnered up and they’ve met each other on the HBCU tour and so  it’s really a great example of how the students and staff and the alumni of Ottawa Hills have come together to help make this a great school.”

Helmholdt says the school is proud of its history of alumni coming back to mentor current students. He credits that to aiding the nearly 50 percent increase in its graduation rate in the last seven years.

Tai and Sy plan to study at Grand Rapids Community College with a major in criminal justice and minor in Spanish. They say they want to help people who like them, are working for a better life.

“Just because you came from a bad background doesn’t mean your future can’t be bright," Tai says.

As women of color, all four of these women recognize there are many obstacles in their way.

“We have to work twice as hard to be only half as good," DeLacey says. “We have to go above and beyond because we’re not, we can’t hold ourselves to the same standards.”

Above all, DeLaney and DeLacey say what makes them most proud is the growth they've seen in Tai and Sy.

“From their junior year to now, they stepped it up. Like their attitude and the way they carry themselves even is phenomenal," DeLaney says. “They went from ‘I don’t know’ to ‘We did it.’”

The Yancey twins say they hope Tai and Sy can one day return to Ottawa Hills and "pass the torch" by mentoring other students, maybe even twins.