America gets Mueller report; Barr gets in first word 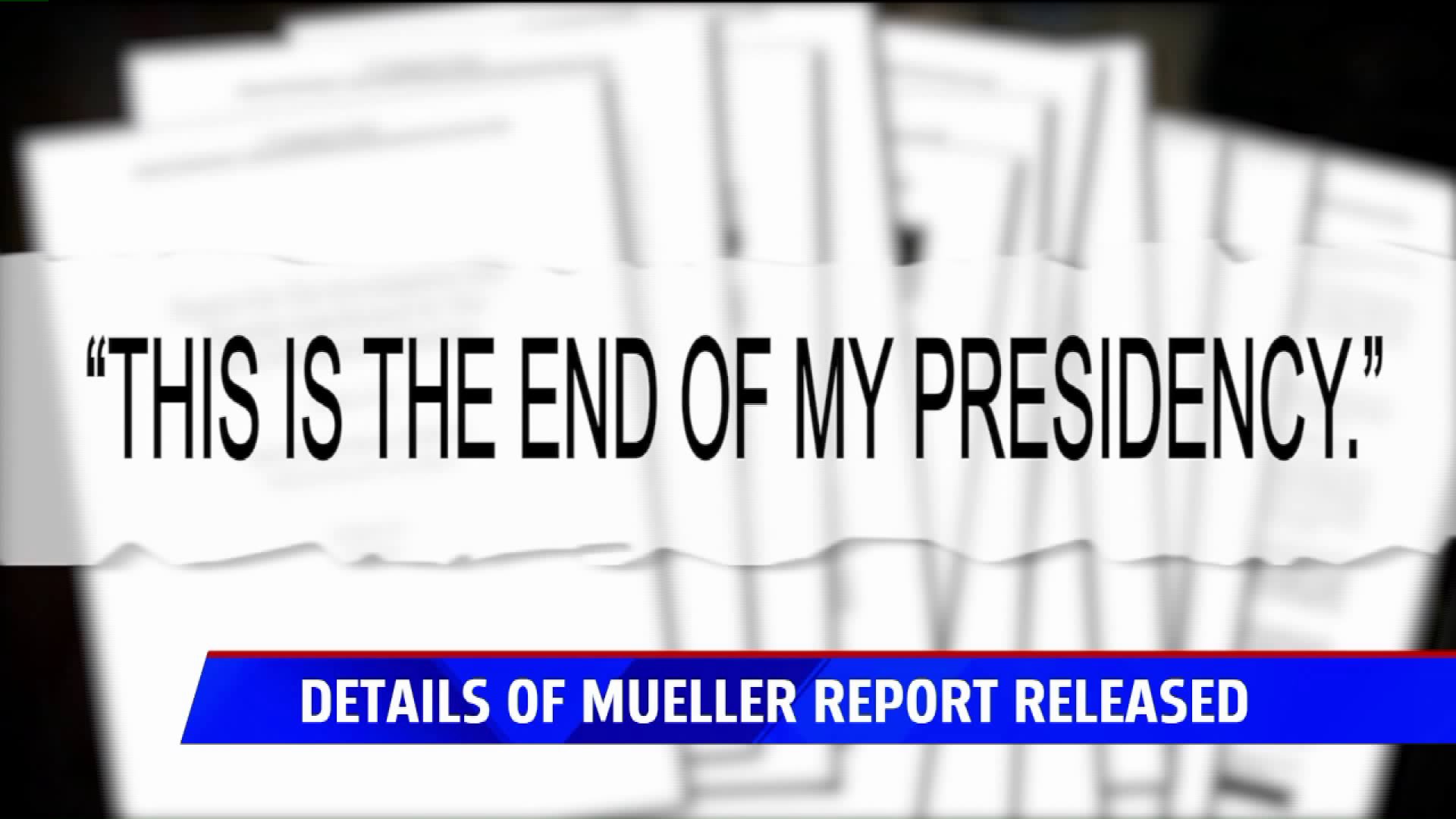 WASHINGTON (AP) — After nearly two years of waiting, America is getting some Trump-Russia answers straight from Robert Mueller.

Eager to get in a first word ahead of the public release of the special counsel's report, Attorney General William Barr on Thursday laid out in advance what he said was the "bottom line:" No collusion between the Trump campaign and Russian government hackers.

While Mueller drew no conclusion about whether President Donald Trump had obstructed justice in the investigation, Barr said he and Deputy Attorney General Rod Rosenstein personally had concluded that while Trump was "frustrated and angry" about the Mueller probe, nothing the president did rose to the level of an "obstruction-of-justice offense." Barr said Mueller's report examined 10 episodes pertaining to Trump and obstruction.

The Justice Department released a redacted version of the special counsel's report Thursday on Russian election interference and the Trump campaign, opening up months, if not years, of fights over what the document means in a deeply divided country.  Click here to download and read the 448-page report.

Barr said at a news conference that the president did not exert executive privilege to withhold anything in the report. And he said the president's personal attorney had requested and gotten a chance to review the report before its public release.

Barr said that he and deputy Rod Rosenstein disagreed with some of Mueller's "legal theories" pertaining to obstruction of justice. But he said that didn't influence their conclusion that Trump didn't commit a crime.

He said they set their feelings on the matter aside and accepted Mueller's "legal framework for purposes of our analysis" but still determined that the evidence gathered by Mueller was "not sufficient to establish" that Trump had violated the law.

Barr said that no one outside the Justice Department has seen the unredacted Mueller report. And he added that no redactions were either made or proposed outside of the small group of Justice staffers that pored over Mueller's report.

The report's release will represent a moment of closure nearly two years in the making and at the same time the starting bell for a new round of partisan warfare.

Even ahead of the report's release, Democrats cried foul about Barr's press conference, for "spinning the report" in the words of Senate Minority Leader Chuck Schumer.

"The process is poisoned before the report is even released," he said.

And moments after Barr finished speaking, House Judiciary Chairman Nadler sent a letter requesting that Mueller himself testify before his panel "no later than May 23."

Barr's news conference ended abruptly after Barr bristled at the tone of some questions about how he handled the Mueller report.

The report was expected to reveal what Mueller uncovered about ties between the Trump campaign and Russia that fell short of criminal conduct. It was also to lay out the special counsel's conclusions about formative episodes in Trump's presidency, including his firing of FBI Director James Comey and his efforts to undermine the Russia investigation publicly and privately.

The report was not expected to place the president in legal jeopardy, as Barr made the decision that Trump shouldn't be prosecuted for obstruction of justice. But it is likely to contain unflattering details about the president's efforts to control the Russia investigation that will cloud his ability to credibly claim total exoneration. And it may paint the Trump campaign as eager to exploit Russian aid and emails stolen from Democrats and Hillary Clinton's campaign even if no Americans crossed the line into criminal activity.

Overall, Mueller brought charges against 34 people — including six Trump aides and advisers — and revealed a sophisticated, wide-ranging Russian effort to influence the 2016 presidential election. Twenty-five of those charged were against Russians accused either in the hacking of Democratic email accounts or of a hidden but powerful social media effort to spread disinformation online.