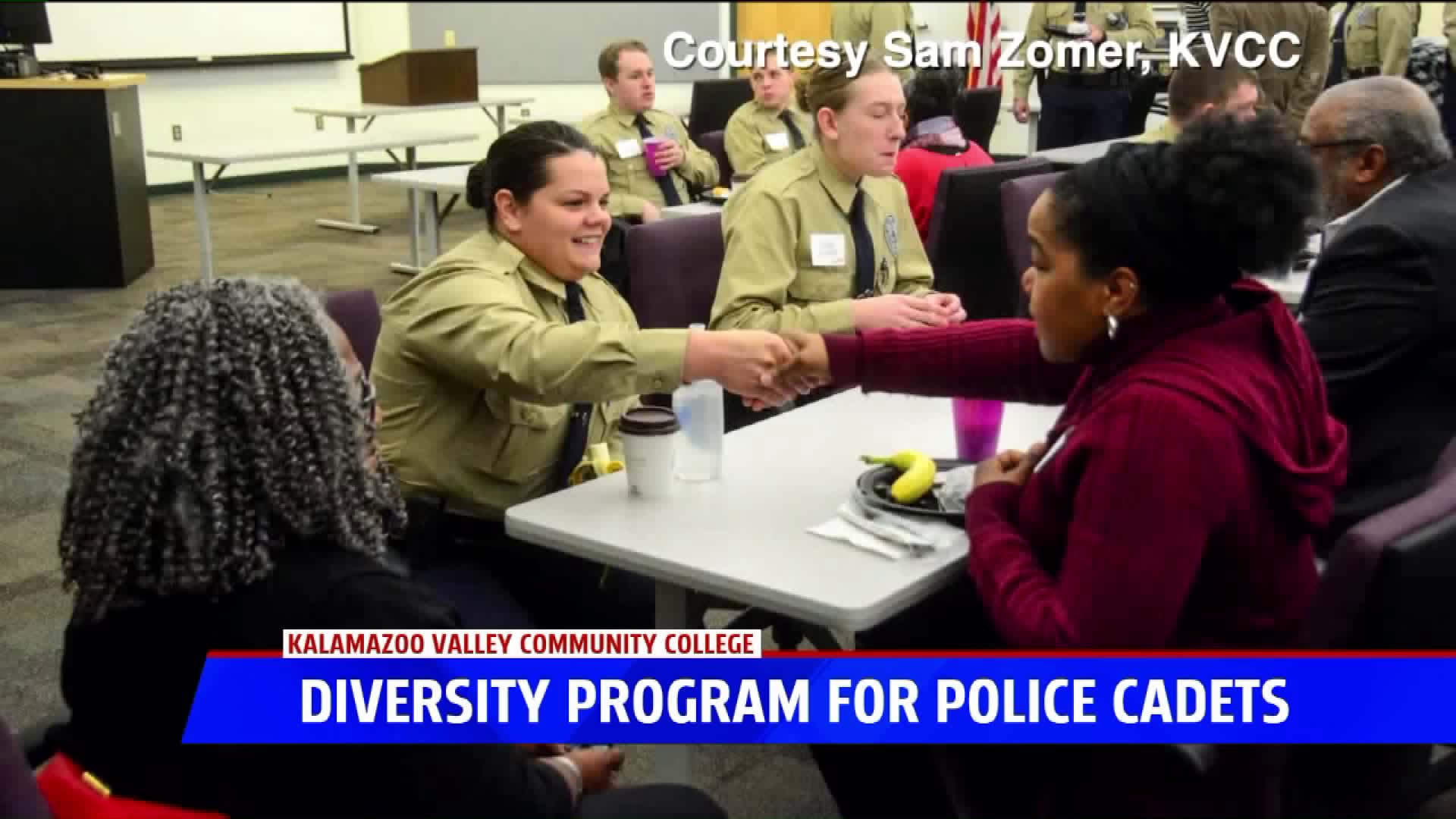 KALAMAZOO, Mich. — When Vic Ledbetter was a police officer and a captain with Kalamazoo Public Safety, he saw widespread racial tension between the department and the communities of color they served. Throughout his 25-year career he noticed the divide widening.

Last July he retired and joined the police academy at Kalamazoo Valley Community College. Since then he’s been working to correct the problem.

“When I took this position the one thing I wanted to do was have a safe space where people of color could actually meet with cadets, potential police officers, and get to know each other,” Ledbetter said during an interview at KVCC. “We have more in common than we have uncommon.”

Ledbetter felt that talking led to healing. So he and retired KDPS officer Stacey Randolph created the event Expanding Our Horizons: A Cultural Awareness Experience. It’s a day-long event, between cadets and community members, centered on having conversations regarding race relations and cultural differences.

Ledbetter said over 70 people were invited to the event held at KVCC in early February. Fifty of them, ranging from age 19 to 77 years old, battled the polar vortex to participate.

“The bittersweet thing is this is the first of its kind in the state,” said Ledbetter who also partnered with the Kalamazoo County Foundation and Bronson Community Health, Equity and Inclusion staff to put on the event.

Attendees sat down with the cadets in what was called Racial Healing Circles and talked about a variety of topics from local laws to American history to green books -- pamphlets informing African Americans in the 1940s, ’50, ‘60s where to eat and sleep while traveling in the United States.

“We talk about redlining and things that’s going to affect them when they deal with communities of color, how communities came about and why they’re in that situation,” Ledbetter said. “So they can’t judge people from a social, economic point of view. Just because somebody’s poor doesn’t mean that they should be treated differently.”

“It was very beneficial,” said Nick Tuleja, a member of the tribe at Gun Lake. “I think it really helped not only myself but the other cadets who maybe come from different backgrounds, smaller towns, really kind of broaden their views.”

Tuleja said he’s always wanted to be a police officer since he was kid, mainly to help people and serve communities. However the riots in Ferguson, sparked by the shooting death of 18-year-old Michael Brown by white police officer Darren Wilson in the suburbs of St. Louis, opened eyes to his true calling within law enforcement.

“It’s more now to change the perceptive of not only how law enforcement views the public but how the public views us,” Tuleja said. “I think by my interactions with the public, hopefully I can help change that narrative and with every small interaction I leave someone with a positive impact.”

Ledbetter said he and Randolph are planning another event for August. He plans on doing this for every cadet class he has for years to come.

“I would love to see communities and cadets and future police officers sit down together and just talk things out instead of just being so angry with each other,” Ledbetter said.