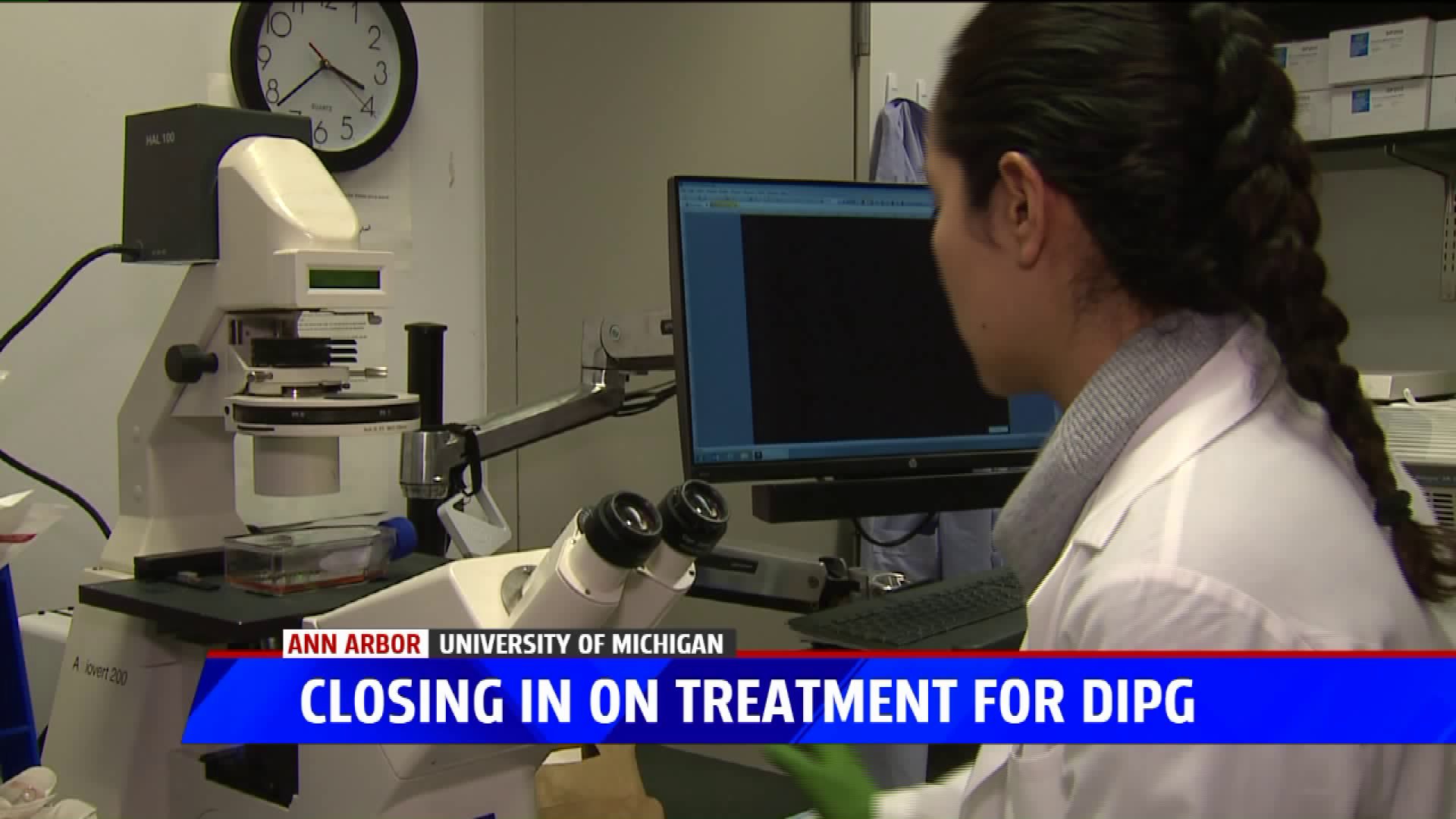 ANN ARBOR, Mich. — For as long as it’s been diagnosed, rare pediatric brain cancer Diffuse Intrinsic Pontine Glioma, or DIPG, has been a death sentence.

It was for Chad Carr, grandson of legendary Michigan football coach Lloyd Carr, and it has been for a handful of families in Michigan.

“For a family to hear those words - and you can’t do anything about it, and you’re just there waiting for the worst to happen,” said Tom Ruddy, who lost his son to DIPG in 2016. “It’s just unacceptable to tell a family that there’s nothing you can do.”

“Anything other than ‘take your kid home and let them die,’ is better. Because that’s more or less the news we were given,” said Ken Buron, who also lost his daughter Emma to DIPG the same year. He and his wife live just a few miles away from the Ruddys.

After their children passed, The Ruddys and the Burons raised money and awareness in any way they could, but because there are only about 200 cases in the United States yearly, DIPG gets neither the funding nor the research opportunities other, more prevalent cancers receive.

But that changed last month, when a husband-and-wife doctor team at the University of Michigan sent away for a National Institutes of Health grant and got it.

Dr. Pedro Lowenstain and Dr. Maria Castro are now putting the money to work on a treatment that could take the death sentence of DIPG and turn it into a chronic disease with high quality of life to follow.

Typically, DIPG tumors sit at the vulnerable base of the brain stem, so radiation and operation are simply too dangerous for young brains.

“It’s extremely hard because there’s essentially nothing you can do to treat these children,” said Castro. “We are at the beginning, so it will take many years before we get there.”

“It’s a combined way of killing the tumor and training the immune system to recognize there’s a tumor there and kill it,” said Lowenstein.

The grant of nearly half a million dollars is the first significant money towards DIPG research at the University of Michcigan. The treatment has already been tested in adult patients with a different form of glioma and proven successful.

If things progress at the same rate, soon, they will begin clinical trials on pediatric DIPG patients.

It could be the foundation for other brain tumor treatment, even in adults.

“We’re putting all we have into it, really,” said Castro. “You believe and you fight for it, so that’s what we’re doing.”

For local parents, and all parents and patients fighting DIPG, it’s a start that hopefully leads to an end.

“It’s a race, it’s an ultra-marathon, and you never know where the end is,” said Lowenstein. “You try and you try and you do your best and if everything works well, it’s kind of like a miracle.”

To support ChadTough and Tom and Ken on their fundraising effort at the 2019 Chicago Marathon, click here.