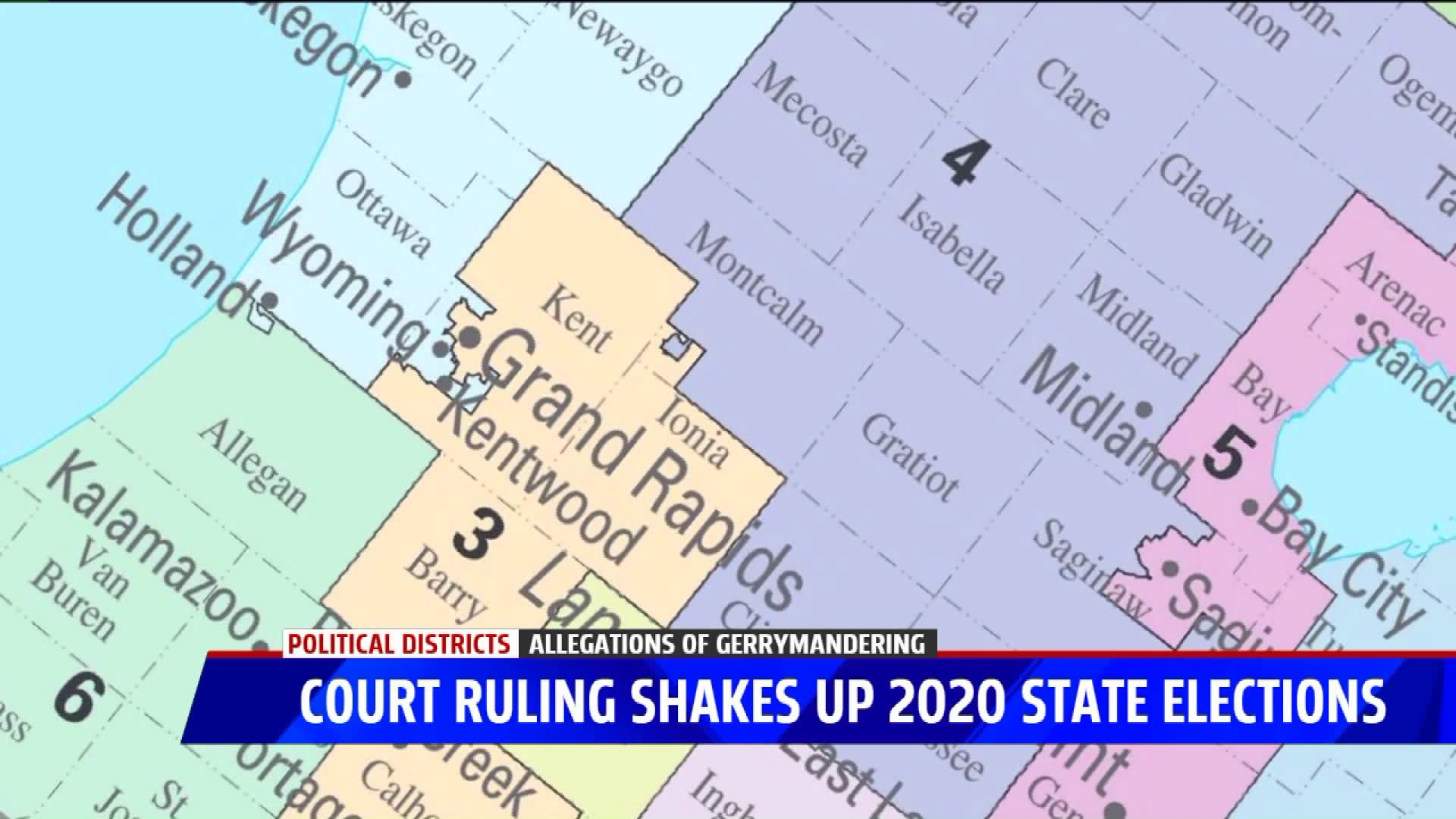 LANSING, Mich. (AP/FOX 17) — A three-judge federal panel ruled Thursday that Michigan's congressional and legislative maps were unconstitutionally gerrymandered for partisan gain, ordering the state Legislature to redraw at least 34 districts for the 2020 election.

The decision also requires special state Senate elections to be held in 2020, instead of 2022 as scheduled. It is the latest development in a series of redistricting lawsuits in at least a dozen states.

The judges said 34 of the 162 congressional and legislative districts drawn by Republicans in 2011 violate Democratic voters' constitutional rights, including by diluting the weight of their votes. They gave the GOP-led Legislature until Aug. 1 to submit new maps, which would need the signature of Democratic Gov. Gretchen Whitmer. An appeal is likely.

According to court documents, Republican efforts began in 2009 when the Republican State Leadership Committee (RSLC) raised $30 million to help Republicans across the country draw district lines in their favor. The initiative was called "Project REDMAP."

Court documents state an excerpt from a 2013 RSLC report, which says "(t)he effectiveness of REDMAP is perhaps most clear in the state of Michigan."

The case reveals Republicans held secret meetings about redrawing districts and used personal email accounts to correspond about their efforts.

Some of those emails cited in the case reveal that Rep. Justin Amash, (R-Grand Rapids) and Rep. Bill Huizenga (R-Zeeland) expressed their preferences and concerns about the political makeup of their districts.

“Judges and courts should not be in the business of drawing legislative boundaries. I have consistently said Michigan’s  Second Congressional District is not gerrymandered.  While the outcome of this ruling has the potential to impact all of Michigan’s Congressional Districts, it needs to be pointed out that the boundaries of the Second District were not called into question by this litigation. I believe this ruling will be appealed and the underlying litigation will continue to work its way through the courts.”

Amash's chief of staff, Poppy Nelson tells FOX 17, "Rep. Amash has always opposed political gerrymandering and has said that districts should be drawn as part of an independent process that favors compactness, contiguity, and the preservation of political subdivisions and communities."

In a statement, the Michigan GOP said it would support an appeal:

“The Michigan Republican Party disagrees with the Federal courts decision regarding redistricting, and will support an appeal to uphold the will of Michigan voters.”

The Michigan Democratic Party issued a statement in support of the decision:

“We welcome this ruling and any decision that permanently addresses the unconstitutional practice of gerrymandering, and we remain focused on how these positive changes will affect all Michigan voters and their representatives. The people of Michigan can now have legitimate hope that the years of Republicans stacking the deck are over,  and they will finally have the opportunity to elect a legislature that is working on policy to improve the lives of the people of Michigan, rather than protecting political advantages by drawing unconstitutional maps.”

"Their primary goal was to draw maps that advantaged Republicans, disadvantaged Democrats, and ensured that Republicans could enjoy durable majorities in Michigan's congressional delegation and in both chambers of the Michigan legislature for the entire decade," the judges wrote.

The ruling came in a lawsuit filed by the League of Women Voters of Michigan and Democratic voters who claimed districts were shaped by Republican operatives to guarantee the party's dominance in the state Capitol after the 2010 census. They said constitutional rights were violated when Democratic areas were packed in certain districts or diluted elsewhere.

The panel of judges held a trial after rejecting newly elected Democratic Secretary of State Jocelyn Benson's attempt to settle the suit by redrawing at least 11 state House districts for the 2020 election.

GOP lawmakers who intervened in the suit have said the entire proceeding should be halted until the U.S. Supreme Court rules on redistricting cases from North Carolina and Maryland. In oral arguments last month, conservative justices who hold a 5-4 majority seemed wary of getting federal judges involved in determining when electoral district maps are too partisan.

The League of Women Voters, a plaintiff in the lawsuit, issued a statement on the ruling:

“We are very pleased that the federal court today upheld all 34 of our challenges to congressional, state Senate and state House maps. We look forward to remedying all of these districts in time for the 2020 elections.”