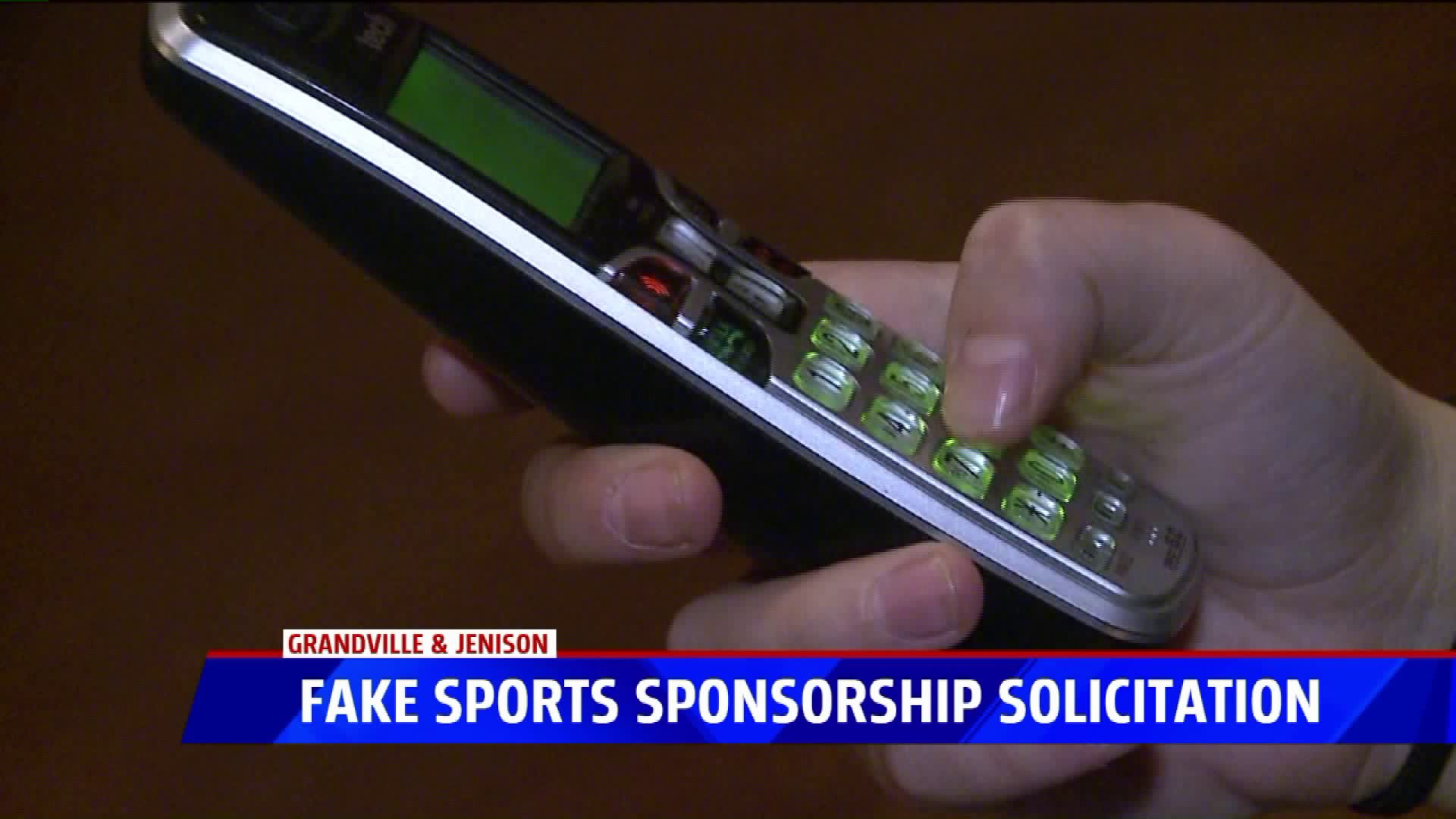 GRANDVILLE, Mich. — The Grandville Jenison Chamber of Commerce is warning businesses about getting calls from Sports Media Advertising, seeking sponsorship money for a partnership with local schools that doesn't seem to exist.

“We get targeted, I believe every day, we get two or three marketing calls," Vice President of the Grandville Jenison Chamber of Commerce David Tosh tells FOX 17.

Tosh owns Grandville Trailer and is very wary of people on the other side of the phone trying to take his money.

“They’ll call up and act like they’re your best friend already, even though you’ve never talked to them before," Tosh says.

This week, leaders at the chamber learned that some of its 450 members were getting calls from Sports Media Advertising, which is based in Texas.

In an email to its members, the chamber says, "The company, Sports Media Advertising, is asking for money for advertising on football T-shirts, but no one from either district has authorized the company to sell T-shirts on its behalf."

The chamber says the company has conducted these scams across the country, operating under a handful of different business names.

Business owners who have gotten calls from Sports Media Advertising say the person on the phone claims the company has a partnership with Grandville and Jenison public schools to set up sponsorships with their teams. The chamber says Jenison Public Schools Superintendent Tom TenBrink tells them no such partnership exists.

One member of the chamber, Kari Douma owns a photography business and when she heard about her fellow members getting these suspicious calls, it was all too familiar.

“I immediately went, ‘That’s exactly what happened to me,'"

About four years ago, Douma says she was contacted by a woman who said she was with a company similar to Sports Media Advertising. The woman told Douma the company was partnering with booster clubs at Jenison High School.

“I photograph a lot of high school seniors, so I thought this would be a great marketing opportunity for me," Douma says.

“It took me almost four or five months that it was a scam," Douma says. "You know and by that time, I didn’t go back to try to, you know I tried to email her a couple times and I just chalked it up to one of those poor business experiences.”

Tosh says there is a lot the business owners can do and look out for to keep from falling victim to deceptive marketing claims.

“You just always wanna make sure, do your due diligence, make sure your sponsorship dollars is going to something that’s legitimate," Tosh says.

He says some red flags are when the caller doesn't know the name of the business owner, if the call comes from out of state and if the call is recorded.

“One thing that really alerts me a lot is if they tell you this call is being recorded for quality assurance," Tosh says. "And that’s so they can come back and say, I believe that you know, ‘Hey you said yes to this question, which means you’re going to buy our product or service.’”

Tosh says sometimes these companies making false claims will send people to show up at the businesses, so he warns that just because you come face-to-face with someone, that doesn't mean they are legitimate.

When business owners fall victim to fraudulent marketing, they often don't get their money back because pursuing a lawsuit usually costs more than the money that was lost in the first place.

When in doubt, Tosh suggests contacting your local chamber of commerce.