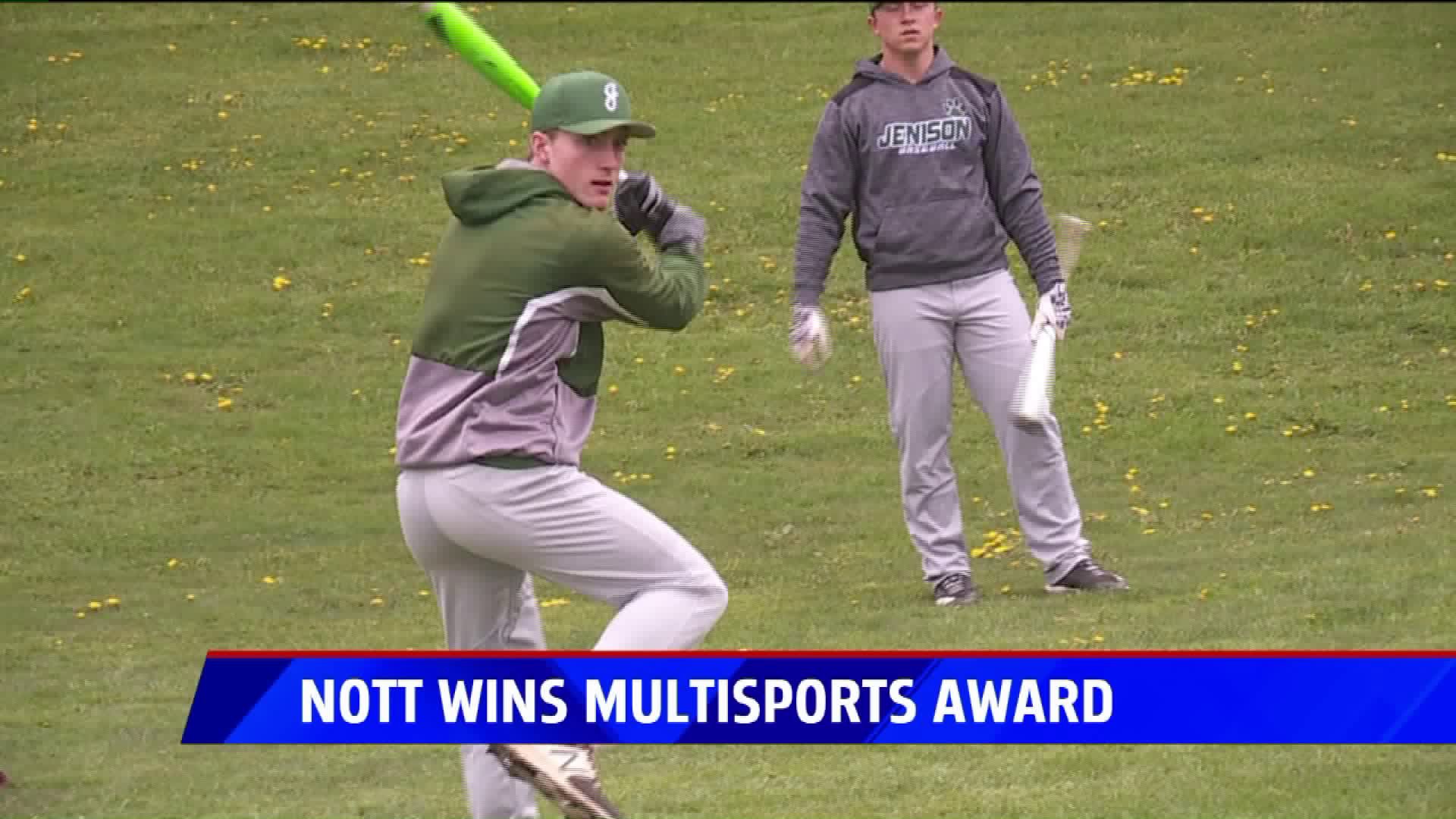 The Jenison senior takes the male class A award

GRAND RAPIDS, Mich. -- It was a little chilly when the Jenison baseball team arrived at Sullivan Field Wednesday for its game against Grand Rapids Union.  Senior Kyle Nott needed a jacket.

"Shout out to Jaxon Smith," Nott said. "Kid's a legend, letting me use his sweatshirt."

You see, for all the accolades that have come his way -- and there have been many, including the Rich Thompson multi-sport award he recently won -- Nott treasures the friendships he has made along the way.

"The bonds I've grown with my team, the success that we've had, I've been playing with all my friends since I was young and all the way through high school," Nott said. "I am happy with how things have gone and it is going to to be good to look back on."

"Outstanding as an athlete, obviously," second-year Jenison baseball coach Tim Keur said. "Then, as a person, getting to know him the last two years, he is an even better person and a kid. So it has been a privilege to coach him."

Nott is headed to next Central Michigan to play baseball. This winter, he broke his ankle during basketball season.  For many high school athletes headed to a Division I school in another sport, that would have been it for hoops, but not for Kyle Nott, who returned to the court to finish the season with his teammates.

"I've just grown up playing with my friends and playing sports with them, so I couldn't feel like I could give up on them," Nott stated. "I just wanted to finish out the season."

"He's a competitor, he's the ultra-competitor," said Jenison football coach Rob Zeitman, who just finished his first season with the Wildcats. "There were times in our season where we thought he was going to be injured. He came off, we'd call a timeout, and he'd say, 'Just give me a second, let's go,' and he's fighting back emotions. Really, it is part of his selflessness. 'I'm going to do this for the guys,' and that was kind of his approach. And it was a lot of fun to be a part of."

Playing three sports at a high level demands hard work and doesn't leave a teenager much free time. When asked if he gets free time, Nott said, "I do, sometimes, and it is fun. I can just hang out with my friends. But for the most part, I am always working. I love the grind."

Nott considered playing multiple sports in college but decided on baseball.  It will be a change to play just one sport when he gets to Mt. Pleasant.

"It's going to be weird going to a new team and a new community, playing with a different name on my jersey," Nott noted. "But I am super excited to get up there at Central and get started. But I am going to look back at (high school), I'm going to miss it, but it's all good."

Nott and his Jenison team still have plenty of baseball to play. The Wildcats host Caledonia Friday, Grandville Saturday, and then jump back into OK Black play next Tuesday against Mona Shores, the team they are battling with for first place.