After fostering 20 service dogs, couple gets their own 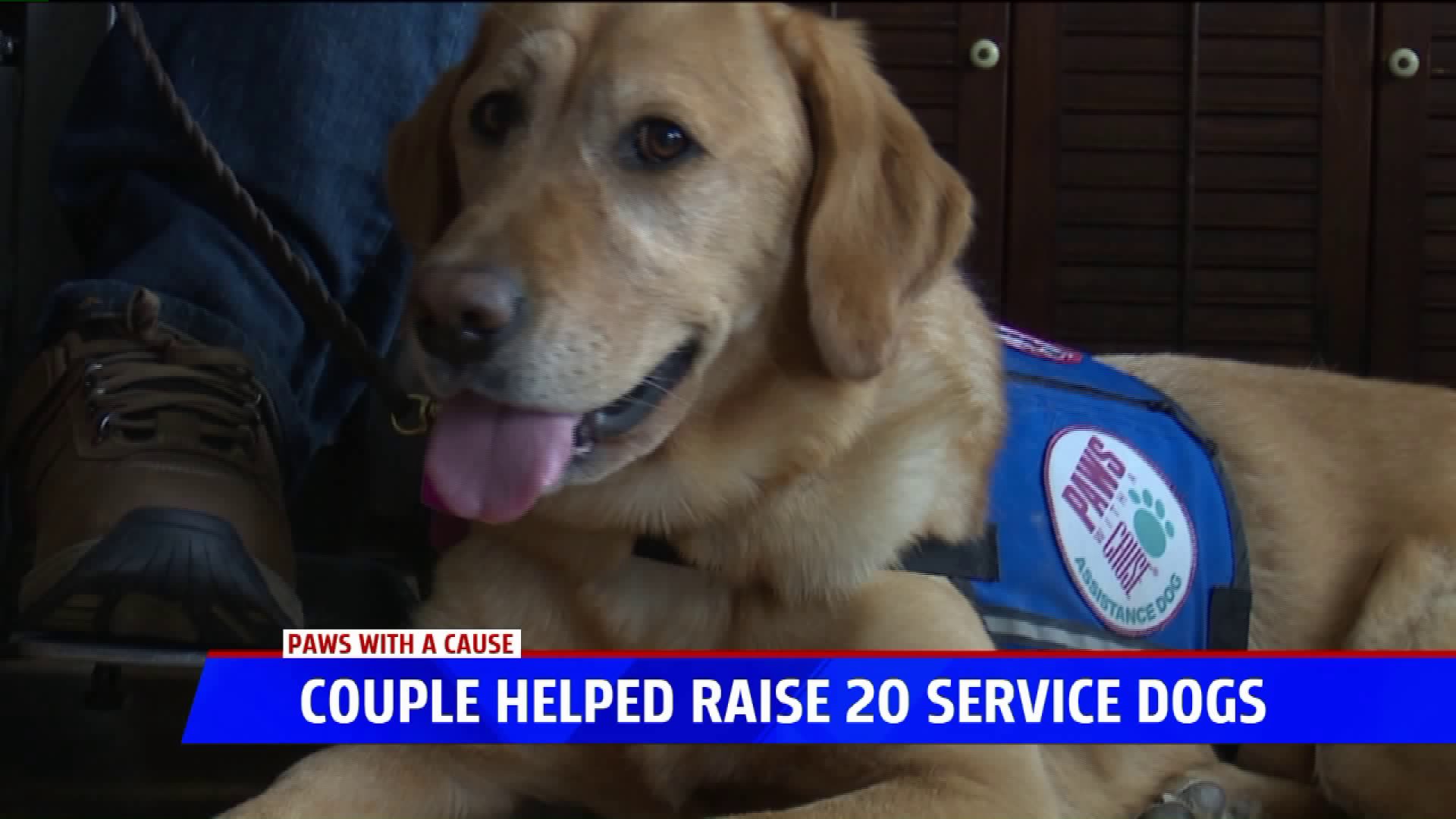 RICHLAND, Mich.-- After raising 20 puppies for a nonprofit aimed at empowering people with disabilities, Jack and Linda Trantham are getting the favor returned to them.

Paws with a Cause is a nonprofit in Wayland that raises and trains service dogs, hearing dogs, seizure response dogs and service dogs for children with autism. The dogs are placed across the country with clients at no charge to them. Clients usually wait years to be placed with a dog because the demand is so high and there are not enough people willing to foster the dogs while they train. Each Paws puppy spends the first year of its life with a volunteer, or "foster puppy raiser."

Over 20 years ago, the Tranthams applied to raise their first foster puppy Justin, a golden retriever.

“He was beautiful, loved him, every bit," Jack tells FOX 17.

Since Justin, Jack and Linda have raised a total of 20 dogs for Paws.

"Once you raise your second dog, you’re hooked for life," Linda says.

In 1973, Jack was working as a construction worker. There was an accident at one of his work sites when almost 1500 pounds of sheet metal fell on him, leaving him paralyzed.

“It rolled me up like a pretzel," Jack says.

Until a couple years ago, Jack did fine on his own and was able to help Linda raise their foster puppies, never asking to have one for himself.

It later became apparent to Jack that he needed the same help he's given others 20 times for through Paws with a Cause. That's where Halo the golden retriever came in.

“First it was just gonna be a few things like go get help because I do stupid things like get stuck or fall out of my wheelchair when I reach for things," Jack says.

It wasn't long before the Tranthams realized a service dog for Jack would drastically improve their quality of life and overall feeling of safety.

One weekend when Linda was out of town, Jack was going down his wheelchair ramp and started going too fast. He was thrown from his wheelchair and it landed on top of him.

“This chair weighs 300-some pounds, so it held me down," Jack says.

The dog was able to bring Jack the phone so he could call 9-1-1.

Linda says having Halo brings her peace of mind. She says as their years of fostering progressed, it became more apparent to her that a Paws dog does more than help its client; it helps the whole family by alleviating worry and the responsibilities of a caretaker.

Naturally, it's difficult to say good-bye to a puppy after fostering it for so long. Linda and Jack say those turn-in days never got easier but were always worth it, knowing what the dog would go on to do.

“You keep the idea of where it’s going, where the dog is going, what it’s going to do and how many people it will help," Jack says.

Since Jack and Linda have a service dog living in their home, they can't raise another foster puppy because it would interfere with Halo's work. Instead, the Tranthams have made it their mission to recruit new volunteers.

“Anybody that is even remotely considering raising a Paws puppy, do it. You won’t be sorry," Linda says.“You have given this total stranger more independence, more a feeling of self-worth that, it’s indescribable.”

When Paws with a Cause gives someone a dog, it comes at no cost to the client. Paws dogs are placed all over the United States. Paws with a Cause field representatives work with clients and their dogs for months to make them a certified team.

Paws with a Cause is accepting new client applications until June 28.

To get involved with fostering a puppy, click here.