Morning Buzz: 5 things to know for May 13 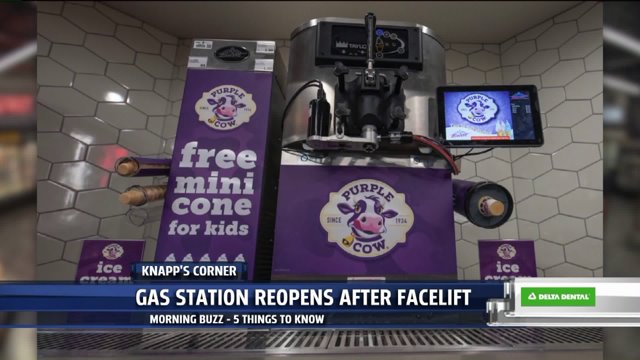 1. A bear made its way into Grand Rapids on Saturday night!

It all started when Taylor Sarjeant of Grand Rapids was on her way into Buffalo Wild Wings on 28th Street and saw what she at first believed to be a dog running across Indian Trails Golf Course. After a second glance, she realized it was a black bear!

She called police and officers then tracked the bear overnight, finding it Sunday morning in a neighborhood tree on the 1600 block of Horton Street.

Within the hour, wildlife specialists arrived and used a dart gun to deliver an anesthetic to the bear. They then took it up north to be released.

Wildlife specialists say springtime is a very common time for bears to end up in a city environment.

2. Cider Week in Grand Rapids is getting ready to kick off this week!

A few events happening this week include a cider and cheese event, cider and paint, a wax candle making event that involves cider, and cider and s'mores. There are also several cider pairings and a cider pub crawl event.

3. The Meijer Gas Station at Knapp's Corner is back open after a big facelift, and it's now called the Meijer Express.

It has two dozen gas pumps and a larger parking area. There are even bigger changes inside, with more options when it comes to fresh, healthy foods, and an added seating area with free wifi.

The biggest draw will be free Purple Cow ice cream for kids each and every day, a tradition that dates back to when Fred Meijer used to pass out coupons for free ice cream in stores years ago.

The department says right now it has about 44 officers who are women and they want even more. If you've ever considered being a police officer, attend the free summit planned for this Saturday. Women can hear from other veteran officers about what it's like to be part of the department.

It's planned at police headquarters on Monroe from 11 a.m. to 1 p.m.

5. Being an office "hottie" can actually be hurting your career. Researchers say a man's good looks could affect his success.

Four experiments in offices showed that handsome men are seen as a threat by their male bosses, and were less likely to be given promotions.

When men hired other men to work with them, attractiveness was factored into the hiring decisions,. But a woman's attractiveness did not keep her from advancing.

The study says companies should use neutral, outside recruitment firms to get the best workers.