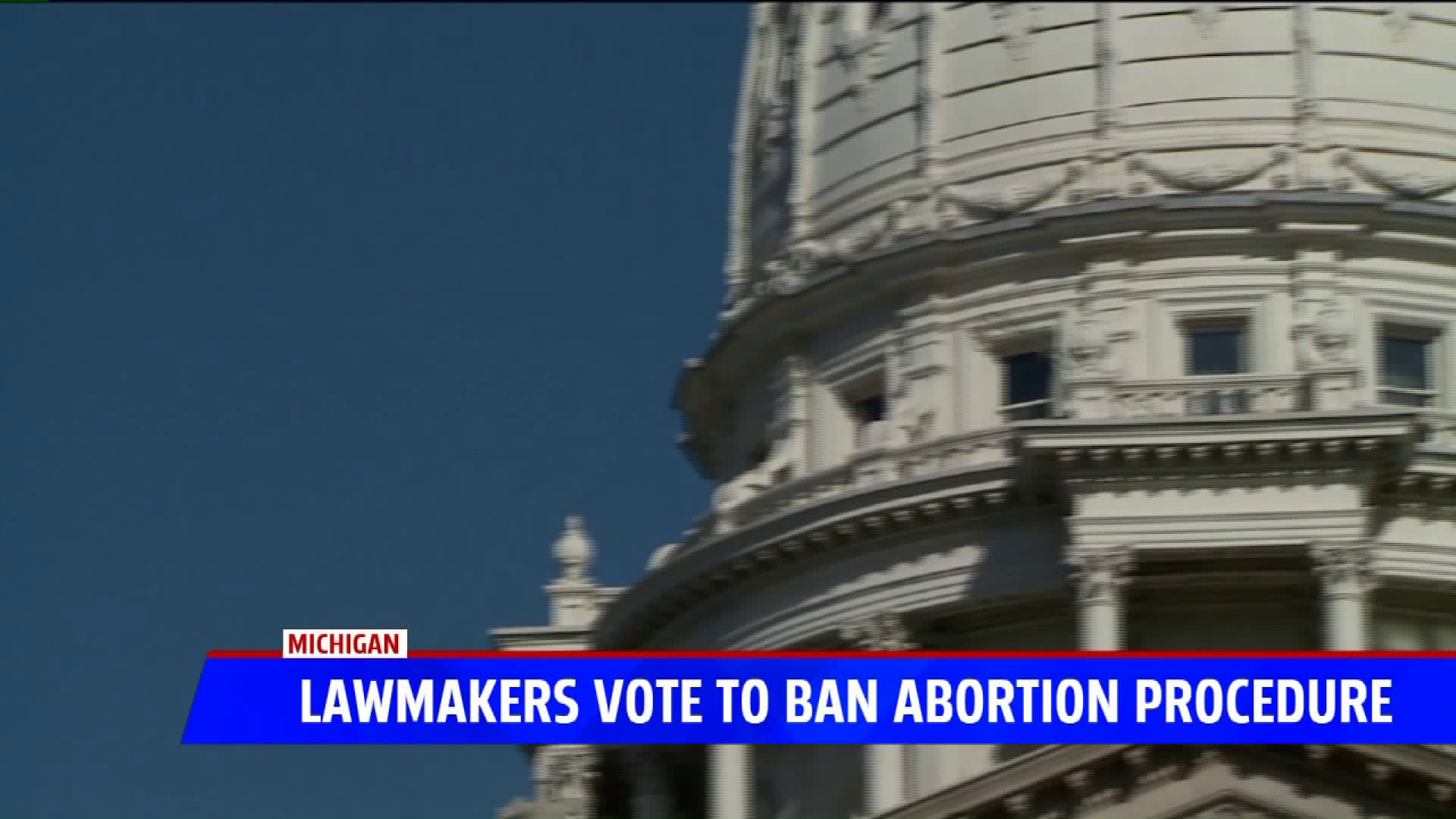 The bills would prohibit physicians from performing abortion by dilation and evacuation, or D&E,  except to save a woman's life. Anti-abortion advocates refer to the procedure by the non-medical term "dismemberment abortion."

Angela Vasquez-Giroux, the director of communications for Planned Parenthood Advocates of Michigan says calling a D&E abortion "dismemberment" is harmful.

“What they’re doing in characterizing this procedure the way that they are, is helping to make people feel upset and uncomfortable and you know, frankly grossed out by it," Vasquez-Giroux says.

The procedure, in which the fetus is removed in pieces with a surgical instrument such as forceps, was used in 1,777, or 6.7%, of abortions in the state in 2017. It accounted for half of all second-trimester abortions, including 78% done after the 16th week of pregnancy.

“The scientific truth to this procedure is that this is the standard of care for folks who are pregnant at that stage of their pregnancy," Vasquez-Giroux says.

The Senate and House passed identical legislation , on 22-16 and 58-51 party-line votes, at a time Republicans across the U.S. are advancing tough anti-abortion bills they hope can pass muster with the Supreme Court.

“We definitely think Roe v. Wade should be revisited," says Chris Gast with Right to Life Michigan. "It was wrongly decided and this bill specifically isn’t an effort to do that. It would be nice if they did but we don’t expect the United States Supreme Court to overturn Roe with our dismemberment ban. Really this is just the next step.”

With Whitmer vowing to veto the measures when they are sent to her desk — as soon as next week — Right to Life is preparing to launch a citizens' initiative that could be enacted by lawmakers without her signature. The group has successfully used the maneuver four times before to put anti-abortion bills into law.

"This is a horrific, barbaric procedure. It literally rips arms and legs off of living babies. This is not OK. This is not OK for any civilized person," said Genevieve Marnon, legislative director for Right to Life of Michigan.

Whitmer said Tuesday she will veto the legislation.

"I think that these are decisions that should be made between a woman and her doctor," she said. "I've always supported a woman's autonomy and freedom to make her own choices, and that should be no surprise to anyone in this town."

Democrats criticized the bills during floor debates that drew passionate and at times tearful, personal speeches from both sides of the aisle. Opponents called the legislation an unconstitutional and "sexist attack," and shared stories of women who ended their pregnancy after learning the fetus would be born with severe health problems.

"Not only is this legislation dangerous to the health and well-being of women, it also infringes upon the rights of patients and their families to make difficult, compassionate decisions to spare unbearable suffering," said Sen. Winnie Brinks, a Grand Rapids Democrat.

But one of the bill sponsors, Republican Sen. Tom Barrett of Charlotte, said legislators were "taking a stand for life" by restricting a procedure that should "shock the conscience" of the public.

GOP Sen. Ed McBroom of Vulcan acknowledged the difficulties facing any woman whose fetus has medical issues but said: "If it's a life, how can we justify snuffing it out?"

Dilation and evacuation, or D&E, has been barred by 12 states. Bans are in effect in Mississippi and West Virginia but are on hold in eight other states because of legal challenges. North Dakota's law, signed last month , only becomes effective if a federal appeals court or the U.S. Supreme Court allows its enforcement. Indiana's ban, which also was enacted in April, is set to take effect in July but is being challenged in court.

The Michigan legislation would modify a ban on a method that opponents call partial-birth abortion to also include the dilation and evacuation procedure. It would be a crime for physicians or others to use the D&E method, punishable by up to two years in prison and a $50,000 fine.