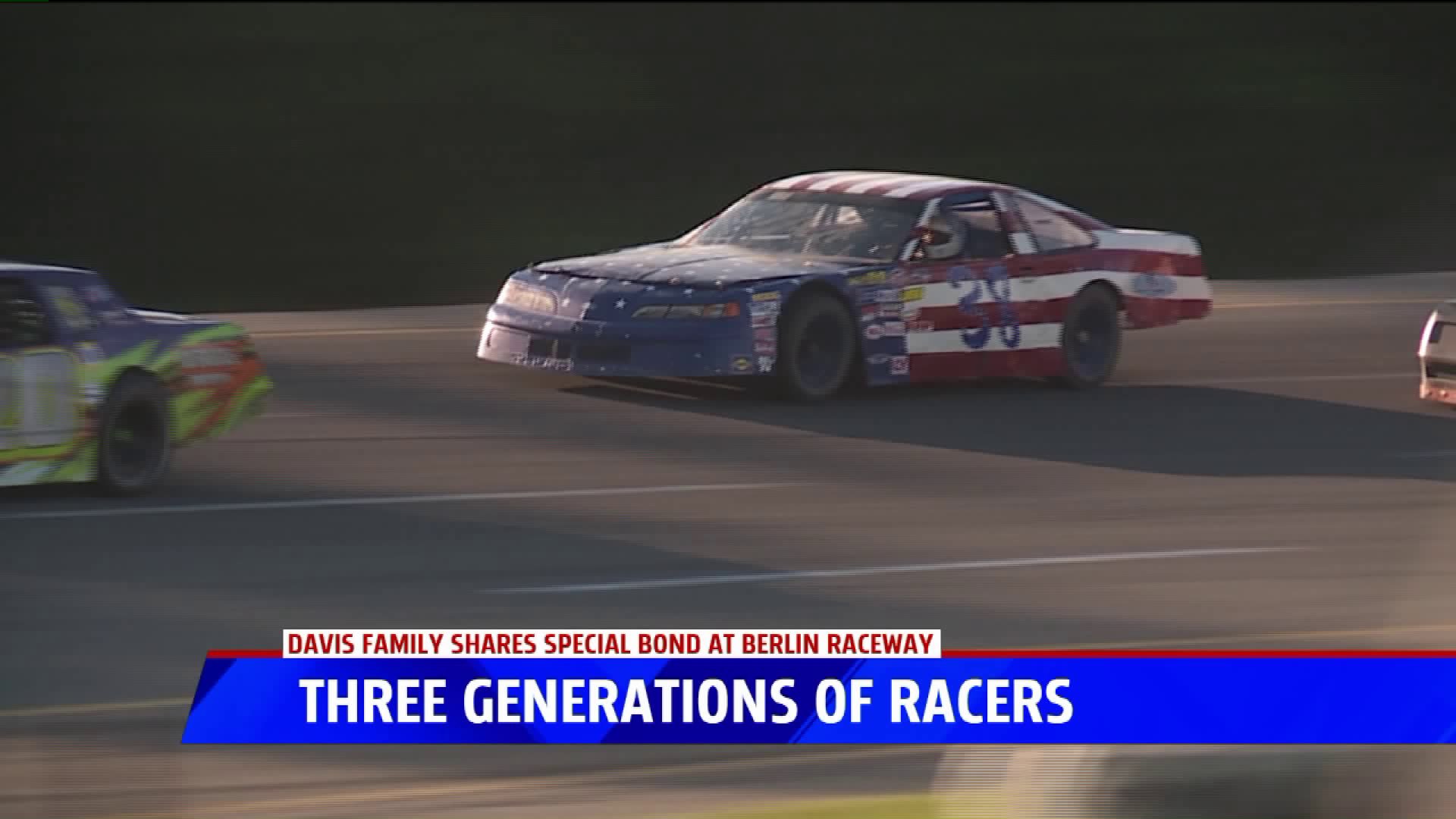 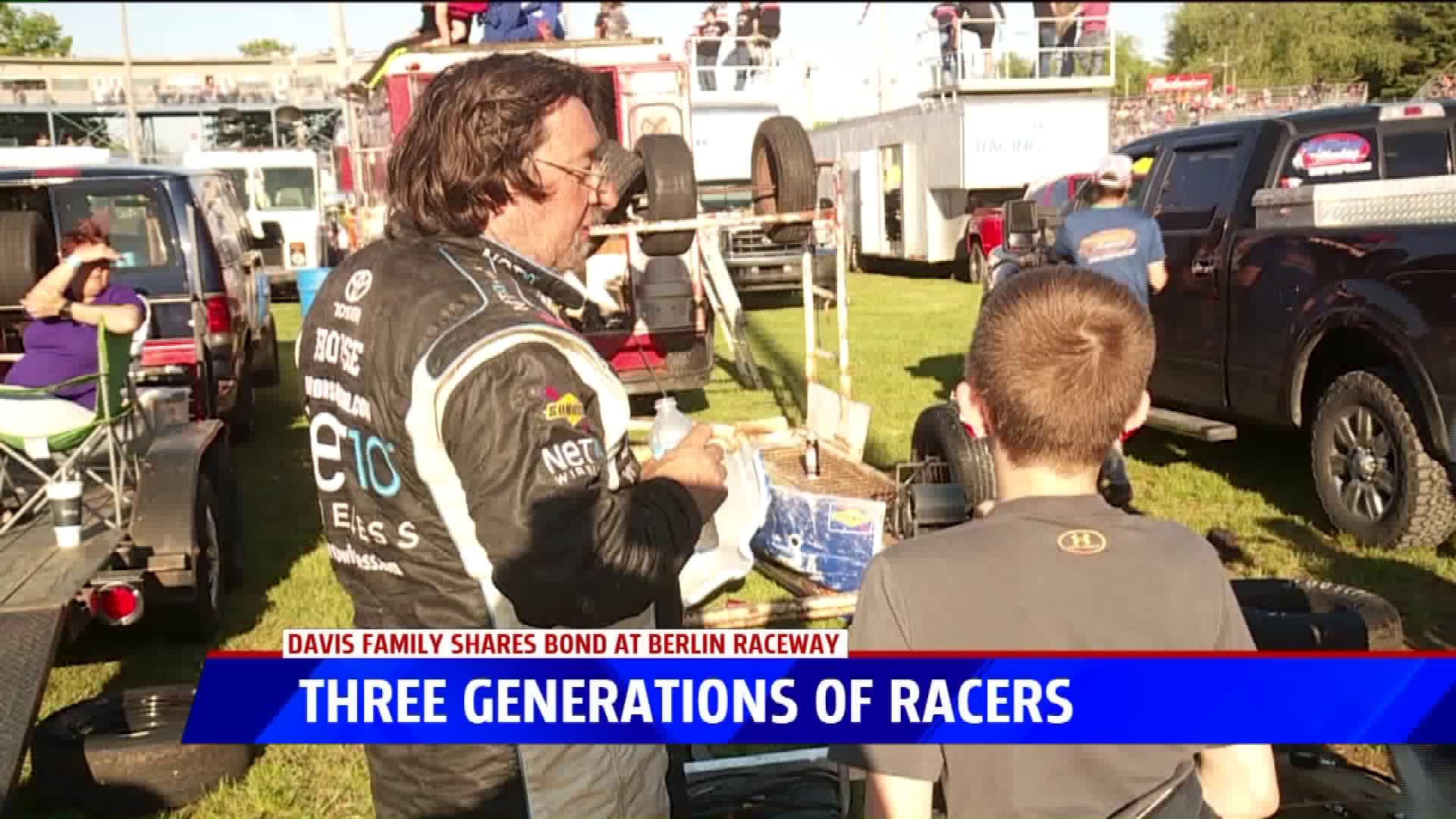 MARNE, Mich. -- For the Davis family, racing is more than a hobby. It brings them together.

"You get a lot of family time with your kids and grandkids, which a lot of people don't get," grandfather Maurice Davis smiled. "I get to have that."

The Davis family has three generations of racers at Berlin Raceway this summer, from grandfather Maurice to his sons Allen and Tony, all the way down to the grandkids, Brayden, Tyler, and Elliott,

"It's a good bonding experience with my own son and the whole family," Allen said. "We all have that one thing in common and talk about that, because we have that same experience."

Grandpa "Mo," as he's often called, has always had a love for racing, dating back to his youth. And that passion has since trickled down to the rest of the family.

"When I got older and my brother was doing it, and my dad was still doing it, it was like I was missing out kind of," Tony laughed on the factors of him choosing to race.

Maurice is now in the Sportsman series at Berlin Raceway, while Allen and Tony race in the Superstock. But they've raced in the same division in prior years, which brought out their competitive side.

"It's bragging rights, like Michigan and Michigan State," Tony laughed. "It's the inner circle, like I'm better this time."

The family all helps each other out when it comes to repairing cars or getting each other onto the track for practice, qualifying, and races, but during the race, it was personal.

"You get in the pits, everyone helps each other, but on the track, you want to beat the other person," Maurice smiled. "There's sometimes the arguing, but that's racing."

And just like the adults, the kids in the family have found a love for racing as well as three of Maurice's grandkids take part in Berlin's Mini Wedge series this summer.

"I've been going to the races since I was a toddler," grandson Tyler said. "I've been seeing my dad, my grandpa and uncle racing, and I thought it was really fun."

"Well, my grandpa and uncles did it, so I thought I might try it," grandson Brayden Cook added.

Of course, with six cars at the track on any given Saturday night, it isn't always fun and games for the Davis family. "It's one race after another after another, which is what you want, but it's hectic," Tony mentioned.

"It's a lot of fun, but when it's that many, there's no time for anything," Maurice added on the number of cars the family has at the track. "For six cars we have seven adults and three kids to get all six cars out for practice, qualifying, for races. It gets to be really hectic, but it's a lot of fun."

For the Davises,  it's hard to imagine what life would be like without racing.

"I don't think we'd be nearly as close as a family, that's for sure, and I wouldn't want to imagine that," Tony said.

The big question is how much longer can the Davises keep three generations on the track? Well, Maurice says he isn't ready to give it up quite yet.

"I'd like to go a few more years but it depends," he said. "The kids have to make up their mind on what they want to do. If they don't want to race, they aren't racing. If they want to go up to the bigger class when they're older, I'd like to say I raced against my grandkids."