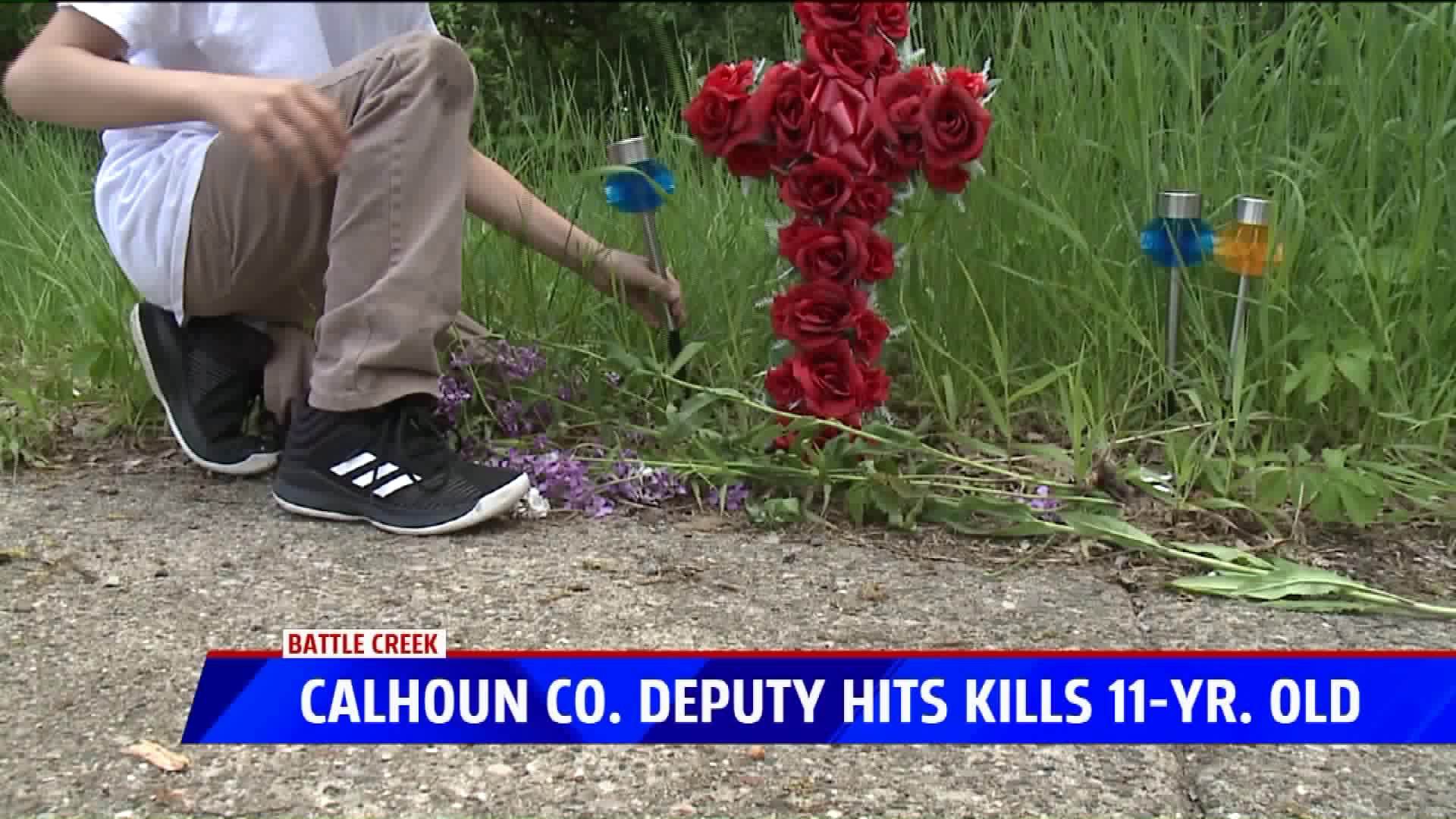 BATTLE CREEK, Mich. — Ashley Baker said she’ll never forget what she saw Tuesday night on Lenon Street. She was at home when she heard a loud bang and a “dragging sound.”

Baker immediately ran out of the house.

“I came up here barefooted, not even my door locked, not even grabbing my cell phone,” she said during an interview at the intersection of Lenon Street and Michigan Avenue. “Just came up here and seen the moped under the (car).”

Baker was shocked. She said she heard the “cop hit a bike” and saw CPR being performed on the boy.

“I was literally at the point where I was going to cry,” Baker said. “I felt so sorry for the family and friends and everything. It really stunned me.”

Calhoun County Sheriff Matt Saxton said during a press conference Wednesday that the deputy was responding to a call of a burglary in Springfield when the collision occurred.

“That deputy was traveling on Michigan Avenue and had a collision with a subject on a pocket bike, which is a miniature motorcycle," Saxton said at the Marshall Regional Law Enforcement Center. “Unfortunately, the impact resulted in the death of the 11-year-old boy.”

Saxton said the boy was taken to Bronson Hospital in Kalamazoo where he was later pronounced dead.

“It’s a very tragic incident that we are here today to talk about the death of a 11-year-old boy,” Saxton said. “My sheriff’s deputy has to live the rest of his life being involved with this incident.”

Saxton said the deputy did not have his lights or sirens on at the time of the accident. He stated that the boy didn't either and the pocket bike he was riding was not made for roadways.

He said it appeared the boy rode alongside the cruiser and then tried to make a turn.

“We sit here today grieving for the parents of that 11-year-old child that lost his life yesterday,” he said.  “My prayers and my heart goes out to that family.”

The boy's mother Christina Valadez posted a message on Facebook saying in part, “I have no words and I don’t have any answers.”

A schoolmate of the boy, who went to Verona Elementary, said many teachers and students were upset when they heard the news. Counselors and a Crisis Intervention Team were at the school all day.

“We are deeply saddened by this loss to our school community and will make every effort to help our students and staff through this tragedy."

Throughout the day on Wednesday, neighbors and classmates stopped by the site of the accident to lay down flowers and lights and a cross. By evening, a makeshift memorial had been created to  honor the boy's short life.

“I’m not saying this to be political but that officer should be suspended,” Baker said. “He should because he should’ve known to turn on his lights."