Elizabeth Warren at Lansing town hall: ‘This is our moment in American history’ 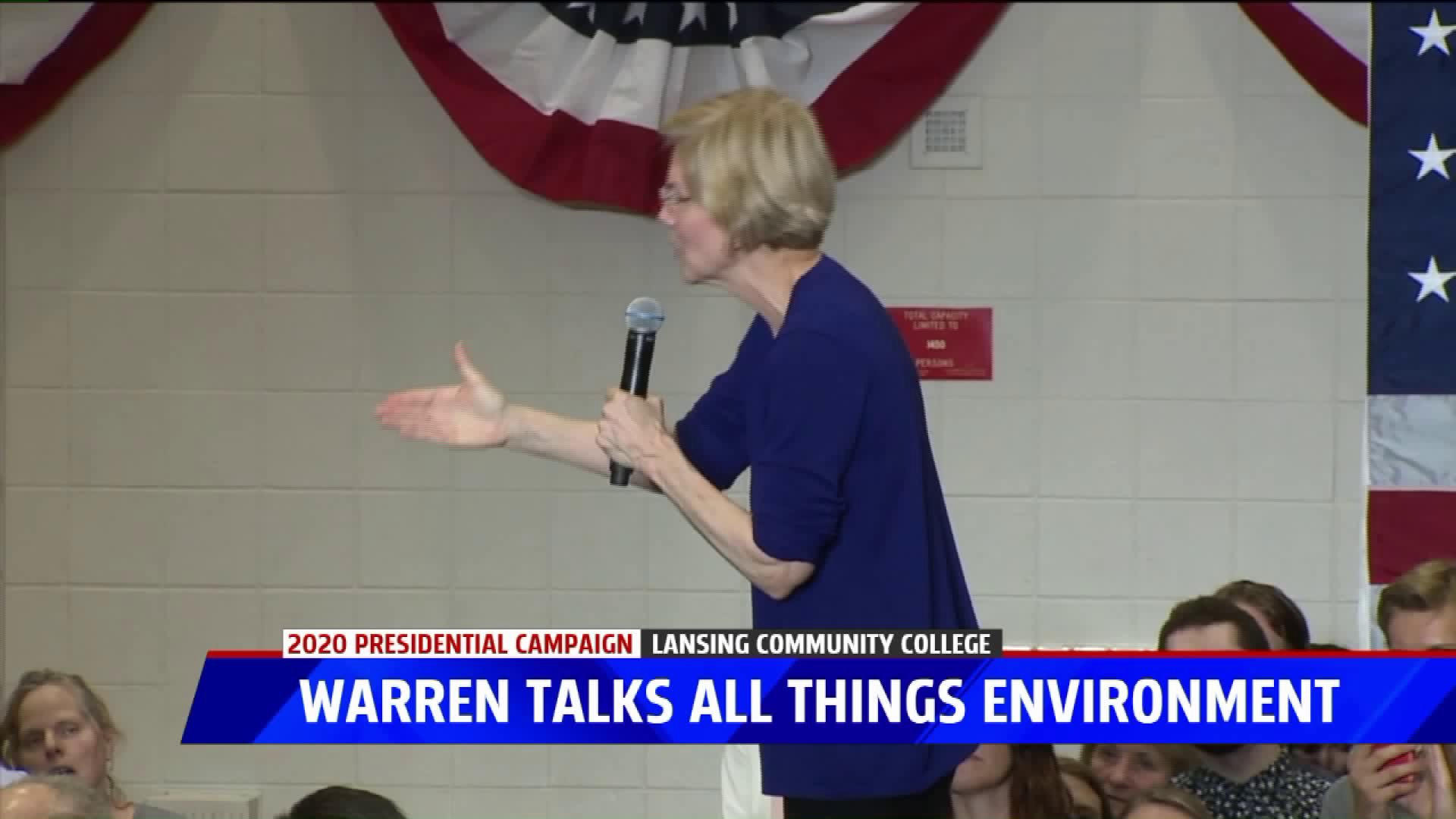 LANSING, Mich. -- Senator Elizabeth Warren, D-Mass., brought her fight for the 2020 Democratic presidential nomination to Michigan Tuesday as she rolled out her climate change plan.

Warren's "Green Manufacturing Plan for America" comes with hefty price tags but incorporates strategies that could build her momentum in gaining support from the far left.

“It starts with a fact, and that’s that climate change poses a survival threat to the world," Warren said to the crowd of 1,700 at Lansing Community College.

The three-step plan includes investing $400 billion in clean energy research and development in a "Green Apollo Program," investing $100 billion in emission-free energy abroad, and spending $1.5 trillion on purchasing American-made clean energy products for American use and to export.

Bethany Fletcher, mother of two and public school teacher in the audience told FOX 17 she and her husband are voting for Warren.

“Climate change is really important for me," Fletcher says. "I want to make sure that we have you know, a planet, a country that is going to be sustainable for my kids, my grandkids and I think if we don’t do something about it now, we’re gonna regret it later.”

"Elizabeth Warren’s support of absurd plans like giving the government control of healthcare, jobs, and education shows just how out of touch she really is with everyday Michiganders. Under Elizabeth Warren, she might have a plan, but that plan would kiss our roaring economy goodbye and pave the way for crippling taxes on all Michiganders."

Warren took three questions from audience members during the town hall. One was from a 7-year-old boy, Owen.

“How do you keep kids safe at school?” Owen asked.

The question got a standing ovation. Fletcher, who is Owen's mom, said Owen's school has active shooter training on Wednesday.

She recalls what her son told her after his school's first active shooter drill.

"(He) explained that it was really important that when they leave school and they’re trying to get away, that they run in a zigzag pattern to help prevent them from getting shot," Fletcher says. “That really hit hard because I don’t want my son to be thinking about those things at school.”

"As one of the grown ups, I'm really sorry you have to ask that question," Warren said.

Warren went on to say that the country needs leaders who stand up to the National Rifle Association.

“It takes a leader in the White House but it takes a grassroots movement across the country," Warren said. "That’s how we’re going to make this change together.”

Another voter, Kellie Stephenson, 20, says what's most important to her is seeing President Donald Trump leave the Oval Office and is leaning toward voting for Warren.

“I just don’t like Trump. That’s my reason," Stephenson says. "I don’t want Trump in the office anymore. I don’t know, I would like a younger person but she’s great.”