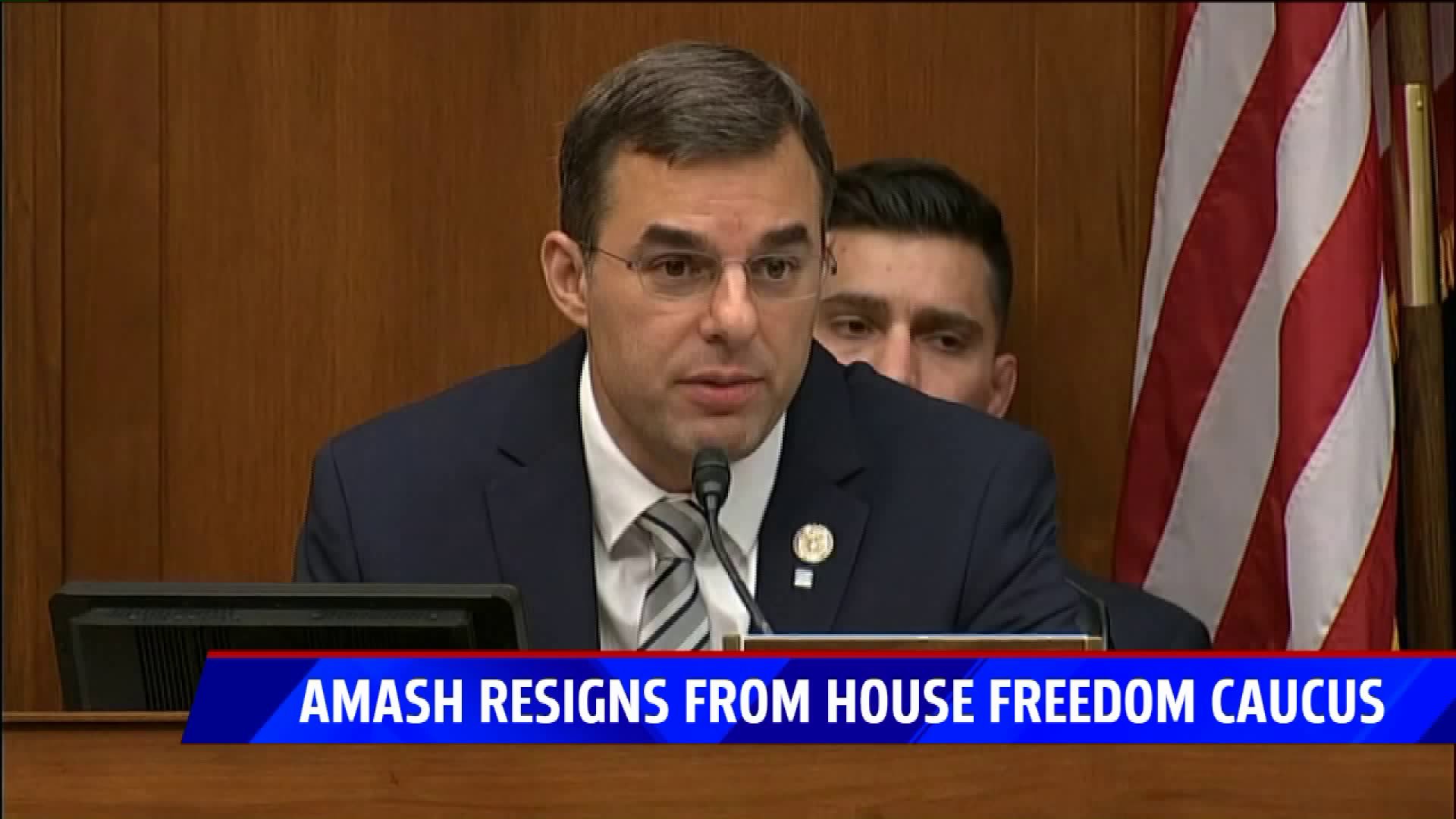 (CNN) -- Rep. Justin Amash on Monday stepped down from the conservative House Freedom Caucus less than a month after becoming the first Republican member of Congress to say President Donald Trump has committed impeachable offenses.

"I have the highest regard for them and they're my close friends," he told CNN. "I didn't want to be a further distraction for the group."

Amash's series of tweets in mid-May shook Capitol Hill, as the conservative Michigan lawmaker said special counsel Robert Mueller's report established "multiple examples" of Trump committing obstruction of justice. Amash was later insulted by Trump for his opinions -- the President said he's "been a loser for a long time" -- and faced blowback from top Republican officials. He's also now facing a primary challenger who is touting his support of Trump.

The House Freedom Caucus is a group of about three dozen hardline conservatives created in 2015. Its members played a key role in ousting then-House Speaker John Boehner that year, and they had a hand in crafting the GOP's ultimately failed American Health Care Act in 2017.

Today, the group is home to some of the President's most ardent defenders, such as Ohio Rep. Jim Jordan and current Chairman Mark Meadows of North Carolina.

Amash, who was a founding member of the group, told CNN in March that he had stopped going to Freedom Caucus meetings after clashing for months with members over the group's direction under Trump.

He told CNN he had attended a House Freedom Caucus board meeting before House votes on Monday night to announce he would step aside from both the board and the group as a whole. The other members didn't know he would be going to the meeting.

"It was a positive meeting. It wasn't negative," Amash said.

He emphasized his decision was voluntary and that he remains on good terms with his colleagues.

Amash remains the only sitting Republican to publicly say Trump committed impeachable offenses based on his reading of Mueller's report. He has said it would be appropriate for House Speaker Nancy Pelosi to move ahead with an impeachment inquiry.

He has not signed on to any existing impeachment resolutions.

At his first town hall since publicly stating Trump has engaged in impeachable conduct on May 29, Amash was greeted in Michigan with a standing ovation.

The Michigan congressman is known for his independent streak and has a history of splitting with conventional GOP positions on controversial topics.

In recent months, Amash has repeatedly declined to rule out a third-party run for president in 2020.

"In life, if you're fighting to defend the Constitution and you find a way to do it that's different and more effective, then you have to think about that," he told the crowd of a potential presidential bid at his Grand Rapids town hall last month.

He was the first Republican to express support for an independent investigation into Russian interference in the 2016 election and to say in 2017 that it could be an impeachable offense if Trump obstructed justice in firing then-FBI Director James Comey.

He drew attention earlier this year when he was the only Republican to ask serious questions designed to uncover potential wrongdoing by the President during an oversight hearing with Trump's former personal attorney Michael Cohen.