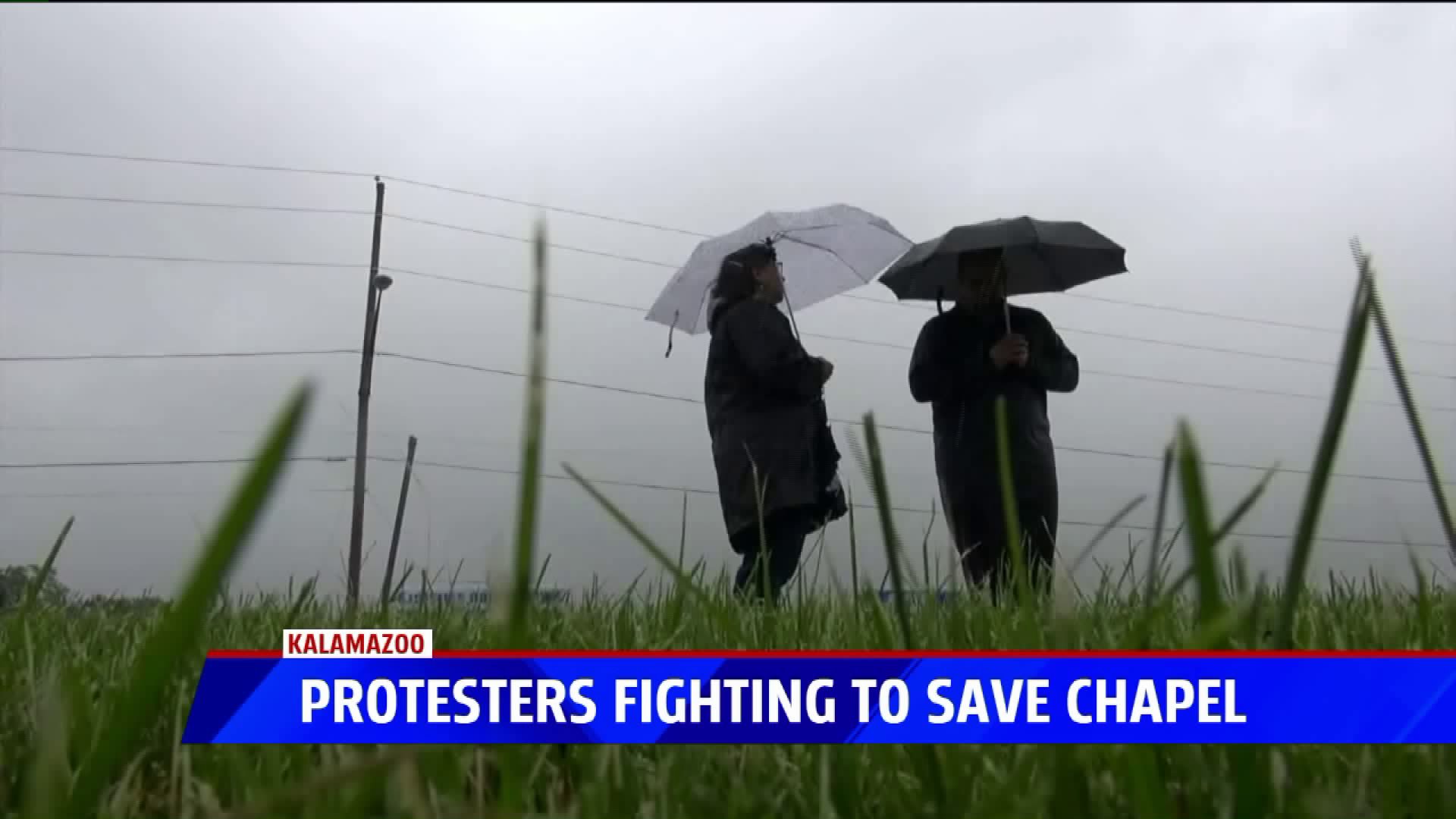 KALAMAZOO, Mich. — Deacon Louis Zemlick and his wife Anne arrived to the intersection of Gull Road and Nazareth Street minutes before their monthly protest began. He walked up and down Gull, in the pouring rain, posting a stack of SaveNazareth.com signs into the ground.

Right at 11 a.m. he and Anne turned to face the Sisters of St. Joseph motherhouse and began to pray.

“We are out here,” said Anne as the rain began to beat on her umbrella. “We’re praying. We’re protesting that the Sisters of the Congregation of St. Joseph come back to the collaboration table and prevent the destruction of Kalamazoo’s iconic historic motherhouse here at Nazareth.”

Anne held her rosary in her hand as she prayed. She said in May over a dozen people showed up to protest.  However Thursday only a handful arrived because of the rain.

But she said they were determined to stay for the hour-long protest.

“All these people who come out here, people who are religious and non-religious alike. It’s history,” said Deacon Zemlick. “It’s our history here in southwestern Michigan.”

Zemlick said that the motherhouse has been around for 100 years. However its managing group, based in Cleveland, wants to demolish it and four other buildings that once sat on  the Nazareth College campus he said.

“This is management. This isn’t the actual sisters themselves, we don’t believe,” said Zemlick. “I believe most of the sisters who have worked here their whole lives, done their ministry, do not want to see something this beautiful destroyed.”

Zemlick said that different organizations, religious and non-religious, including the diocese of Kalamazoo, were in talks with the managing group about the motherhouse’s future role in the area. The community wanted to see it turned into a homeless shelter or center that provides mental health services or even become a sustainable garden.

“This space is very sacred,” Anne said. “It helps guide people and direct people to that spiritual wellness. It’s a huge piece of Kalamazoo’s history.”

However the managing group called off negotiation talks a few months ago and decided to have it demolished to be turned into prairie land, Zemlick said.

According to the City of Kalamazoo, they have met all the requirements for the demolition permit.

“We’re in dire straits now,” Zemlick said. “They could start tearing it down, this building, tomorrow. The city is not going to stop them.”

Zemlick said the protestors are praying for more time. In the meantime, they plan to be out on the side walk on Gull Road on the 13th of every month praying that their message is heard.

“While there are not many people here, we know that they’re at their own tables praying for this,” Anne said.