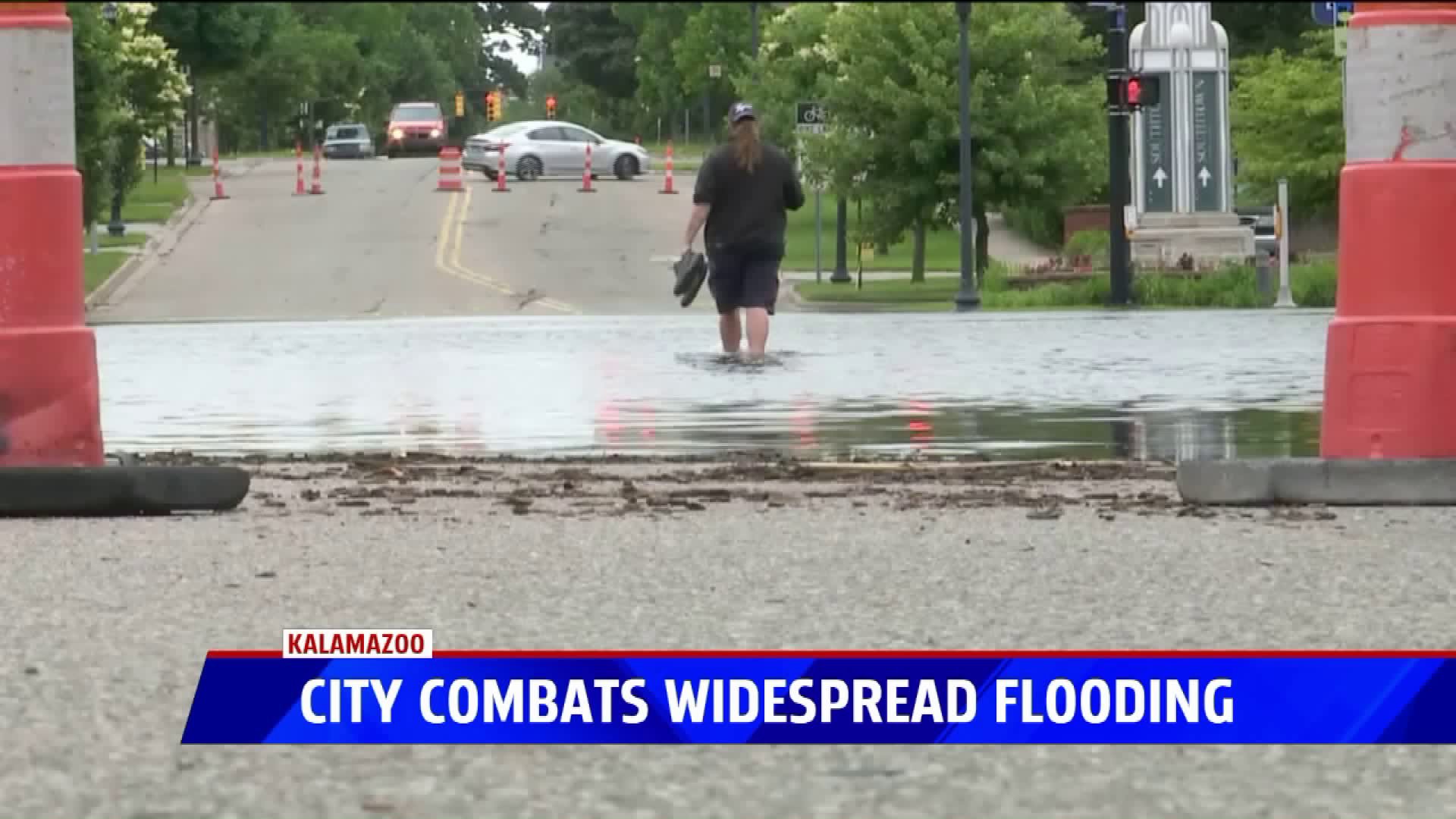 KALAMAZOO, Mich. — When John Soard found out that his best friend’s home was flooding rapidly Thursday morning, he jumped out of bed and drove from Galesburg to help him.

Kalamazoo received more than four inches of rain overnight which led to significant flooding throughout the area, said the City of Kalamazoo in a release.

“I turned down the road and it looked like the water was the same level but spoiler alert, it was not,” Allie DiSanto said. “It was much higher because the road was much lower and my car immediately stopped.”

Half of DiSanto’s jeep was underwater as was the street. She said a tow truck driver picked her up and carried her to Gordon Water Systems a block away on Crosstown Parkway.

“Well it’s up here pretty high,” said Phil Miller, a sales representative and water specialist with Gordon. “[It’s] flooding out a lot of cars, right up to our building.”

Miller said the water was so high near their building that they’ve been using their vehicles to block cars from driving on Crosstown.

“If you have a kayak I think you can go down almost to Bronson hospital from here,” Miller said.

Several roads around Bronson Hospital and the downtown area were blocked off. Craig Dotson, owner of Studio Grill, a popular burger restaurant, said all the closed roads affected their business.

“This has been very frustrating for us this morning,” Dotson said. “Usually we’re packed and we’ve had probably a total of seven tables all day long. It took me about 20 minutes extra to get to work this morning because of all the roads being closed because of the flooding.”

Businesses elsewhere were impacted as well, especially around Crosstown Parkway and Burdick Street. The intersection was filled with water, including parts of Kalamazoo Public Safety’s parking lot.

“We’re in a  flood plain. I understand that,” said John Milne owner of Smokes on Burdick. “But you know it’s worst than it's ever been the last five years.”

Milne said whenever it rains, the water sits idle on the roads with no place to go. Last night’s heavy rains were so bad that his neighbors chose not to open their restaurants or offices.

Even though Milne's grateful that he opened up Thursday morning, he's lost 95 percent of his business revenue for the day because of the floods he said. So he's hoping the city can do something to ultimately end the problem.

“I’m dry here but they won’t let any cars near my building,” Milne said. “We have to accept the fact that until they do something this is going to happen. So we have to figure out a better way to deal with it.”