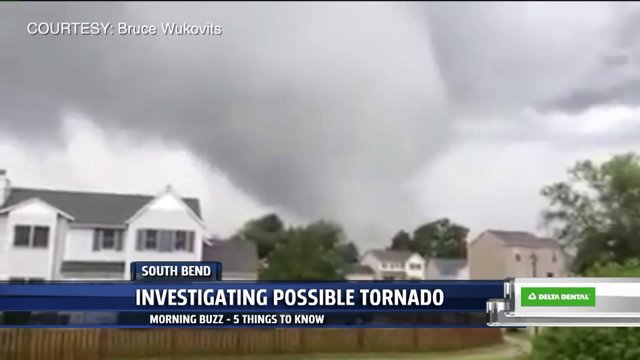 1. People were on high alert in South Bend when a possible tornado caused extensive damage around the area. The National Weather Service will check it out to make the final determination in the Michigan Area.

Watch the video above, which happened around 8:30 p.m. when a tornado warning was issued. Many buildings were damaged including a daycare center.

2. Two hundred children receiving bike helmets for free this week for the 12th annual Lids at the Library event.

The helmets are for ages 1-12 and a parent or legal guardian must be present for a child to receive a helmet.

3. The NBA is honoring a couple of its biggest legends, including former Spartan Earving "Magic" Johnson.

Larry Bird will also share this year's NBA Lifetime Achievement Award. Both former players are already in the Hall of Fame.

Johnson and Bird and their teams, The Los Angeles Lakers and Boston Celtics, respectively, were one of the fiercest rivalries in the 1980s.

Prior to playing in the pros, both Johnson and Bird faced off in college.

4. Toys R Us is making a comeback before the holiday season. At least two will be opening back up in the U.S. before Christmas, and more are slated for next year.

The company closed last year, but now there's talk it could re-emerge as "True Kids Inc." New stores will be smaller than the traditional Toys R Us Stores, but they'll come with play areas and other experiences.

The company is also considering a "Consignment Inventory Model," where they would be able to return unsold items.

5. Dunkin is ready to play to your fashion sense this summer with Espresso Wear.

The donut giant wants to keep people cool at the pool with an espresso collection. The summer wear features a Litte-N-Kini in Dunkin' colors for the ladies and Latte-NK Tops for the Guys. Plus, there's cupholders and aviator sunglasses thrown into the mix that you can wear in funky ways.

No dates have been set for the release of the Dunkin Duds.