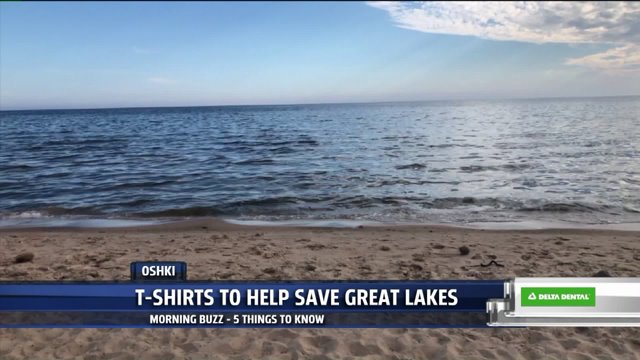 1. Calvin College is transforming into a university next Wednesday.

The Board of Trustees unanimously approved the decision as part of their Vision 2030.

The school's president says it will lead to new academic innovations including the expansion of programs for undergrads and increase the school's influence around the world.

Calvin was named after John Calvin back in 1876. His birthday was July 10, which is why they chose that date for the name change to go into effect.

2. The hot and humid weather will stick around for the holiday. While Grand Rapids will be closing its three pools, families can still cool off at the splash pads.

There are 13 locations across the city. People don't have to be a Grand Rapids resident to use them, they're open to the public and free to use.

3. A young West Michigan business owner is helping preserve the Great Lakes one t-shirt at a time.

Jackson Riegler is going into his sophomore year at the University of Michigan, but he grew up near Pere Marquette, which helped inspire his clothing brand "Oshki" a couple years ago. Each t-shirt contains about six bottles worth of plastic waste recycled from waterways.

Each shirt costs $30 with a portion going to help the Great Lakes.

Tonight, Jackson will be gathering a group of people at Pere Marquette to pick up trash, which will be sent to the manufacturer to make more t-shirts.

4. Ford is celebrating this Independence Day by unveiling a new mystery car.

The company teased this shadowy silhouette of its new GT Supercar that will be shown at the UK's Goodwood Festival of Speed.

Some speculate it will be a track-ready car or an aggressive, street-legal GT. There will be an answer at their big announcement Thursday.

5. Summer igloos are now a thing! Plastic is replacing snow and ice to create one of the season's hottest new backyard accessories, the Garden Dome Igloo.

The 12-foot structure can function as a greenhouse and conservatory, but it can house more than just plants.

The company says it can also serve as an outdoor play area and double as a gazebo.

It'll cost a pretty penny though, Graden Dome Igloos are selling on Amazon for $1,200.