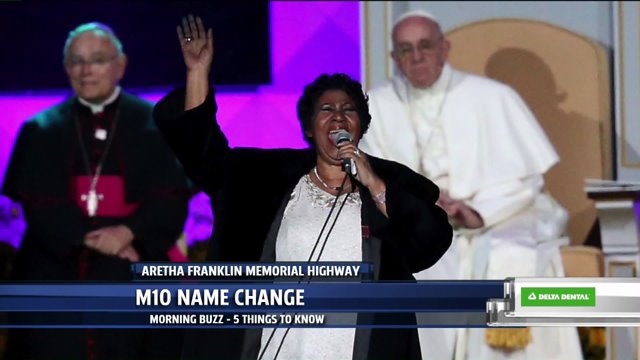 Alexis Brinkert and Christian Johnson will have to take part in a diversion program, requiring them to work with the Ford Family and the Kent Couty Prosecutor's office to visit the Presidential Museum and learn more about his life.

If they meet the requirements, they won't have a conviction on their records. However, if they fail, charges would be filed.

They were accused of defacing part of Ford's gravesite in March when the letter "E" from "committed" was taken off the wall.

2. Music will soon be flowering from the latest major development in downtown Grand Rapids.

Studio Park Development will have The Listening Room Venue, and the fall lineup has been announced.

Artists like The Verve Pipe, Kris Allen, and Ladysmith Black Mambazo will take the stage in November.

The Listening Room is a 200-seat venue, inside the STudio Park Development in downtown Grand Rapids. The venue will host between 4-6 live performances each week throughout the year.

3. The Binder Park Zoo is hosting their 11th annual wine festival, Corks for Conservation, this Friday.

More than 30 wine, cider, and beer tasting stations will set up inside the zoo after hours. Guests need to be 21 or older to attend.

Folks will get the chance to check out live music, a silent auction, and visit with the animals of course.

Single tickets are $40, and $75 for couples. There are tickets for $25 available for designated drivers.

4. A highway will be named after the late Queen of Soul. Governor Whitmer approved legislation this week to designate a portion of M10 as the Aretha L. Franklin Memorial Highway.

Franklin died last year at the age of 76 following a battle with pancreatic cancer.

She grew up in Detroit and began her singing career in the Gospel Choir at New Bethel Baptist Church.

5. Volkswagen is saying goodbye to its iconic bug. After about 80 years, the German automaker is stopping production of its Beetle Model.

The only remaining factory in Mexico will roll out the final Beetle today.

It's the end of an era for the historic vehicle, which evolved from a World War II symbol to a beloved icon of the flower power movement.

The last Beetle will be displayed at a Volkswagen Museum in the city of Puebla.