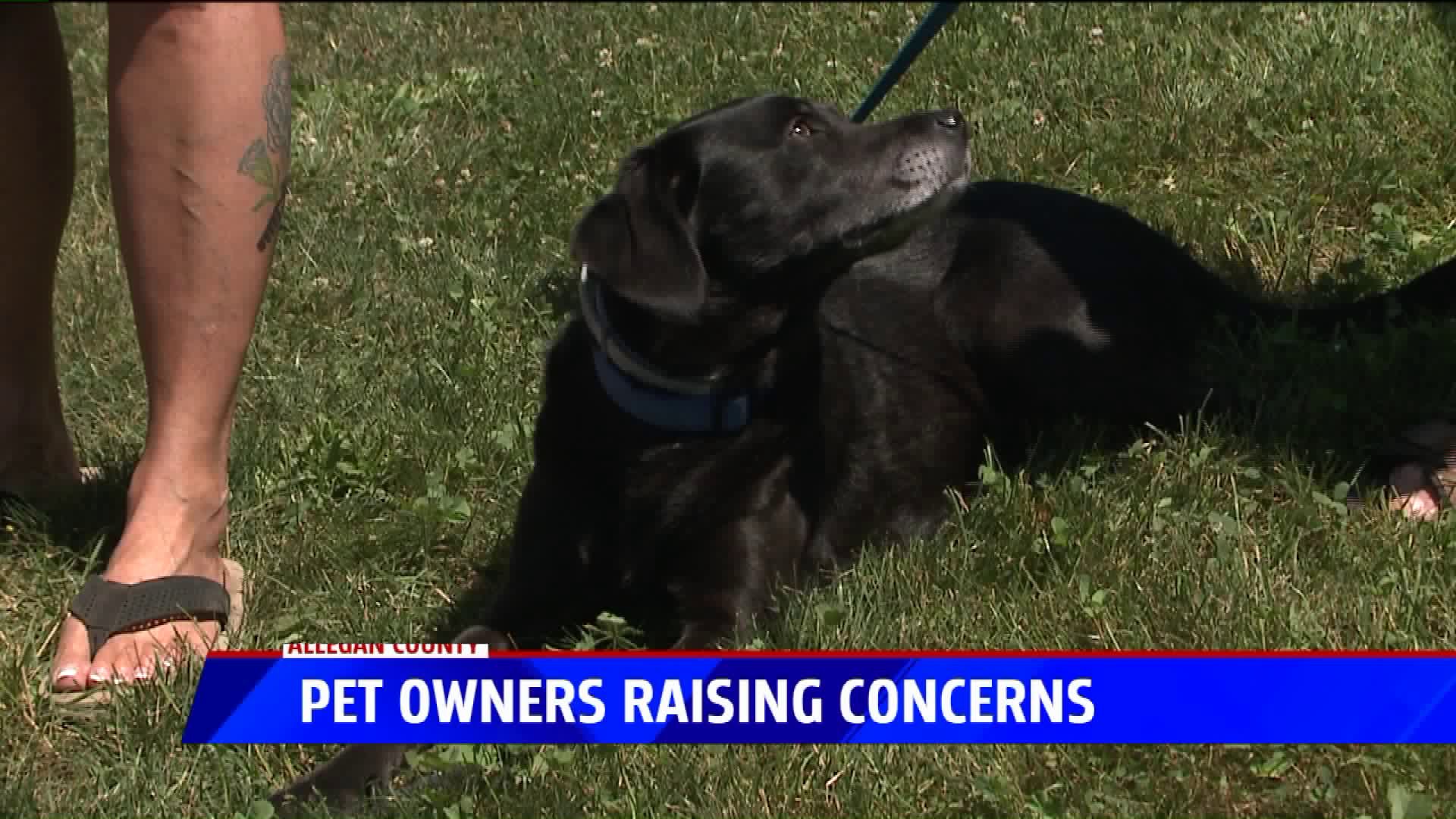 ALLEGAN COUNTY, Mich. -- Pet owners at Dumont Lake Campground believe herbicides sprayed into the water have sickened their dogs. The company that sprayed the herbicides said there's no correlation.

Michelle Goodell, a seasonal camper said, "We maybe thought it was heat exhaustion, but he's still not normal."

She said her dog, Toby, has been lethargic for weeks. Goodell said it's one of the milder symptoms dogs are experiencing after playing in the water.

Bertram, who said medical bills are mounting for his German Shepard, said he spotted a man in a hazmat suit spraying something into Dumont Lake on Monday. He learned this is the company's second visit this year.

June 4 was the first visit. A man was spraying herbicides to treat algae and weeds.

Lapinne said, "Nobody knew. It's a surprise to us."

The company doing the spraying, PLM Lake and Land management, told FOX 17 that seven property owners on the lake paid for the treatment.

He explained that the notices that were posted give a 24-hour water-use restriction so that people are not in the worker's way, and so the products can settle on the invasive plants.

"If there were going to be any adverse effects to wildlife, ya know, raccoons, dogs, deer (or) little children are not going to read signs. There's no way, no how we could ever use these products in our lakes, and we'd be having issues that you're referring to everywhere," Broekstra said.

He said this type of work takes place on lakes around Michigan all summer. Broekstra encourages people to get their pets to the veterinarian which these owners have done, but he said it's simply not the herbicides causing their issues.

Lapinne said, "We're hoping that our dogs get better because they're like family to us."

In response to FOX 17, the Michigan Department of Environment, Great Lakes, and Energy (EGLE) released the following:

EGLE has received several reports concerning sick dogs (including one canine death) in the vicinity of Dumont Lake Campground.  The campground is located on Dumont Lake, a 210-acre waterbody in Allegan County, north of the city of Allegan.  EGLE has also received reports of two dead turtles, a dead racoon, and approximately 20 dead birds at Dumont Lake.

EGLE is currently gathering information regarding the chemical treatment of the lake.  Based on the information that EGLE has been able to gather to date, shoreline treatments of aquatic plants and algae occurred on 0.86 acres on the northwest end of the lake, and 0.46 acres on the northeast end.  The treatments occurred on June 4, 2019, and July 8, 2019.  The chemical treatments occurred along the shoreline of seven properties, and included the use of copper sulfate, flumioxazin, and diquat dibromide under an Aquatic Nuisance Control (ANC) permit issued by EGLE.  The WRD is continuing to actively investigate the reports concerning human and dog illness.

Regarding your question concerning proper notifications, EGLE is currently conducting a routine compliance check on the ANC permit that was issued to PLM Lake and Land Management.  The Aquatic Nuisance Control statute and permit require that the treatment area be posted with signs every 100 feet before treatment.  Properties adjacent to the treatment area must be posted also.  If the treatment area is less than 2 acres (as in the case of the Dumont Lake treatment), the public access and public and private parks that are not adjacent to treated properties do not have to be posted on the day of treatment.

EGLE has also been in touch with the Department of Agriculture and Rural Development and the Department of Health and Human Services regarding the reports of human and dog illnesses.  These agencies are completing separate evaluations to determine possible causes of the human and dog illnesses.  The local health department has also been contacted to determine if any human illnesses have been reported from the area.