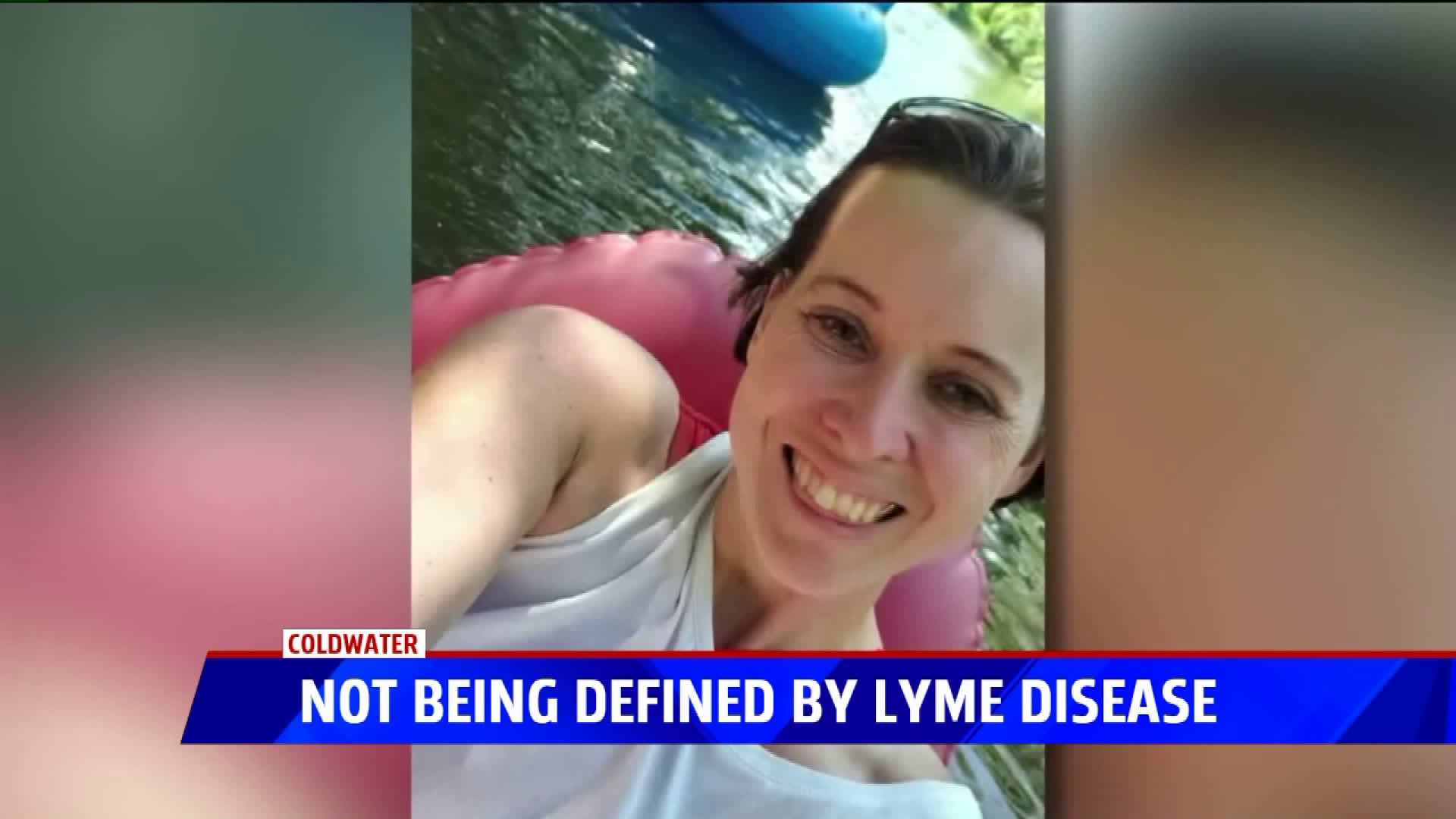 COLDWATER, Mich. — Danielle Dolce goes to Coldwater Yoga a few times a week, she said. She’s been doing yoga there for over a year and enjoys it. She gets emotional even talking about how much she loves it and needs it.

Dolce has been suffering from Lyme disease for over a decade, she said during a recent interview with FOX 17. She’s been turned away from dozens of doctors.

However, yoga has given her her life back she said.

“I just want to live,” Dolce said with tears in her eyes. “Now because I have found my way to live, I am living.”

Dolce described Lyme disease in an essay as “a blanket over my  body suffocating me.” She said she’s been feeling this way since 2008 when she was living in New York with her family in a cottage on five acres of land. Then one day in August of that year, she noticed something on her leg.

“I had a plum, quarter-sized mark on the back of my leg,” Dolce said. “I thought I was bit by a spider and I went to the doctors. It grew to the size of a softball.”

The doctor told her she had stage 2 Lyme disease, she remembered. He gave her a pamphlet and said the disease lasted 21 days.

“I went to the pharmacy with my son and read the pamphlet and cried,” she said.

Dolce was shocked. However she went on antibiotics for three weeks and the mark on her leg went away, she said. Dolce thought she was fine until a year later when she moved back home to Coldwater.

Dolce grieved. She later learned that her Lyme disease was dormant for a while but getting pregnant made it active again.

“So from 2009 to 2012, everything in my body went array,” Dolce said. “My brain fog came back, my joint pain came back. I ended up having to where I have no immune system now.”

Since 2009, Dolce’s been battling severe anxiety and depression as well, she said. She immediately started taking medications for the disease and finding a doctor was difficult. She said she drove throughout the Midwest looking for a doctor but none knew how to treat the disease until she finally met with an LLMD, a Lyme Literate Medical Doctor.

During that time, Dolce gained 260 pounds.  She said some days it was “unbearable” getting out of bed. She explained her pain to her doctor who suggested changing her medication.

“I said I can’t do this no more,” Dolce recalled saying to her husband. “I just want to live and be happy with you. So that’s what we’re doing.”

Three years ago, Dolce stopped undergoing formal treatment. She started enjoying time with her family, taking trips outdoors and even throwing herself a Great Gatsby dinner for her 39th birthday last year, she said.

Meanwhile, she consistently did yoga, which helped her to lose 100 pounds. She loves her life again and grateful she never gave up.

“There’s no reason to give up,” Dolce said tears filling her eyes again. “I’m almost 11 years in, which is just insane to know that I've been fighting it for 11 years. But I didn’t give up.”