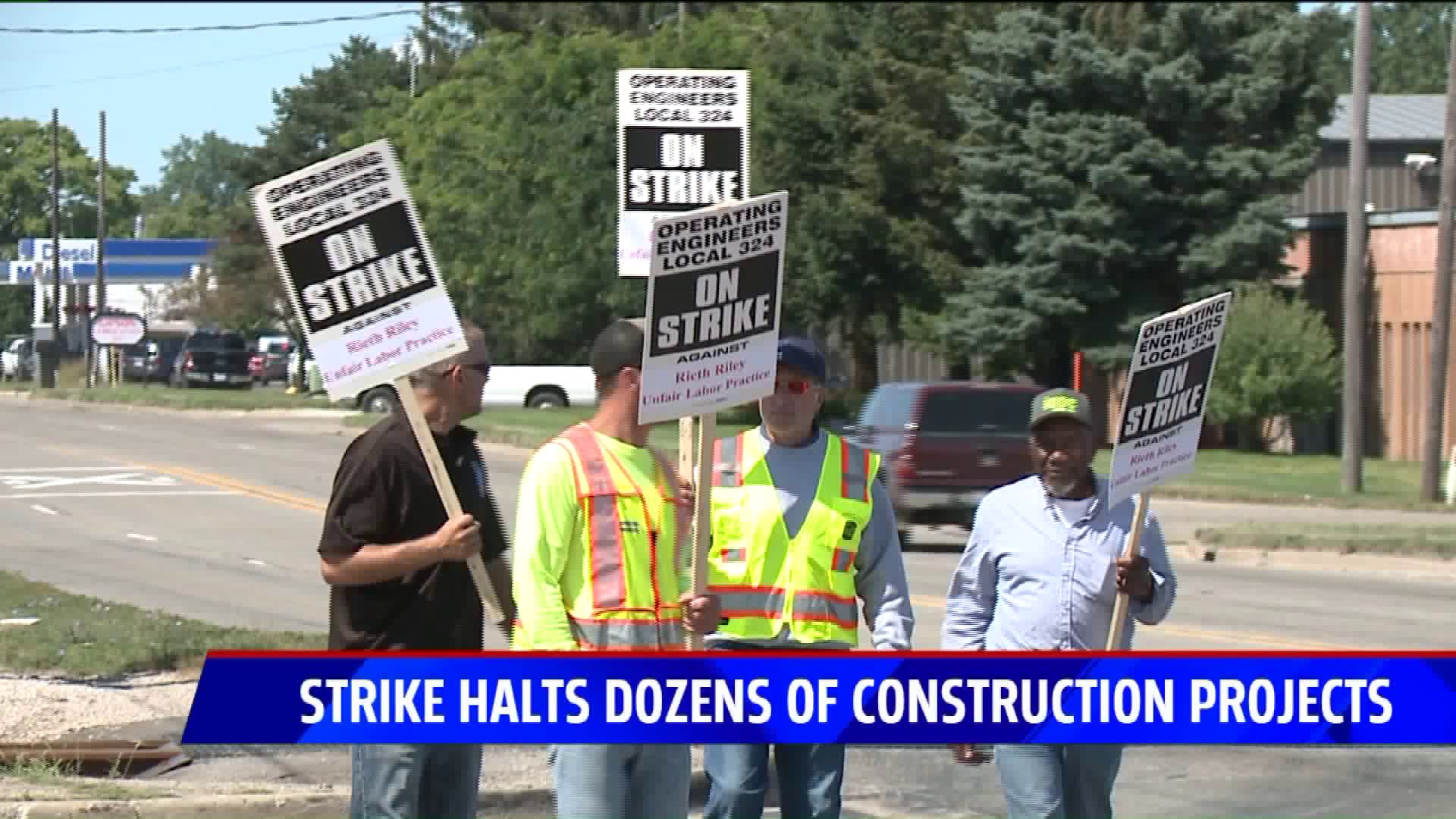 WYOMING, Mich. -- Road projects across the state have come to a sudden stop Wednesday because of yet another labor dispute. Last year, it was a lockout. This year, it's a strike.

Rieth-Riley employees walked out on strike as of 5 a.m.

Passersby honked in solidarity with the workers picketing in front of the construction company's Wyoming location. It’s one of 13 plants across the state where employees are demanding a new contract, according to Operating Engineers Local 324 spokesman Dan McKernan.

"Here we are a year and two months later, there's still not a new contract in place," McKernan said.

"In the meantime, over the last year these workers have had to deal with constant unfair treatment at the hands of the company," he said.

McKernan said he's not at liberty to discuss contract specifics but said last year's lockout, which delayed road projects for weeks, was illegal and that workers deserve back pay.

"We tried to deal with this in the offseason. That was our entire goal, and that's when we worked out contracts with the other hundred-plus road contractors we have agreements with," he said.

"We've met (with Rieth-Riley), but they haven't negotiated in good faith and that's why we don't have a solution today."

Although MDOT could not say which projects are directly affected, McKernan said the strike impacts 80 to 90 state projects. That doesn't include local county and city projects like the one on Byron Center Avenue between 84th and 92nd streets.

Jerry Byrne with the Kent County Road Commission said, "Last night (at) about 9:30, I received a text from the local regional manager at Rieth-Riley saying, 'Hey look, as of midnight the operators union are going out on strike. These projects that are scheduled for tomorrow, obviously, we have to reschedule.'"

Byrne said the project to remove and replace the asphalt on Byron Center was supposed to start Wednesday. Now, he's looking to minimize the impact of the prep work that's already been done.

"And that's why we're looking at what can we do. We've been in contact with Reith Riley today, and if they can't confirm rescheduled date with us we're going to do what we have to do with our own forces to get the pedestrian traffic back open and get the vehicular traffic open for the motorists and the residents," Byrne explained.

"That's what we plan to do starting tomorrow," he added.

Rieth-Riley President Keith Rose released a statement and said, in part, “We have gone back to the table time and time again and have offered up excellent employee compensation plans and the Union has refused to attempt to negotiate a fair deal."

"Claims by the Union that Rieth-Riley is participating in unfair labor practices are merely accusations and have not been decided upon by the National Labor Relations Board.. Thus, this strike is premature at best," he said.

"Rieth-Riley has continued to perform work, pay its employees as promised and
negotiate in good faith with the Union for the benefit of both its employees and its
customers. There simply is no good reason for the Union to stop work. Michigan’s
roads and bridges are crumbling and at the very prime of the construction season,
projects are now being delayed unnecessarily," Rose said.

A hearing on this issue is set for October if the two sides can't come to an agreement by then. It will take place in front of the National Labor Relations Board(NLRB).