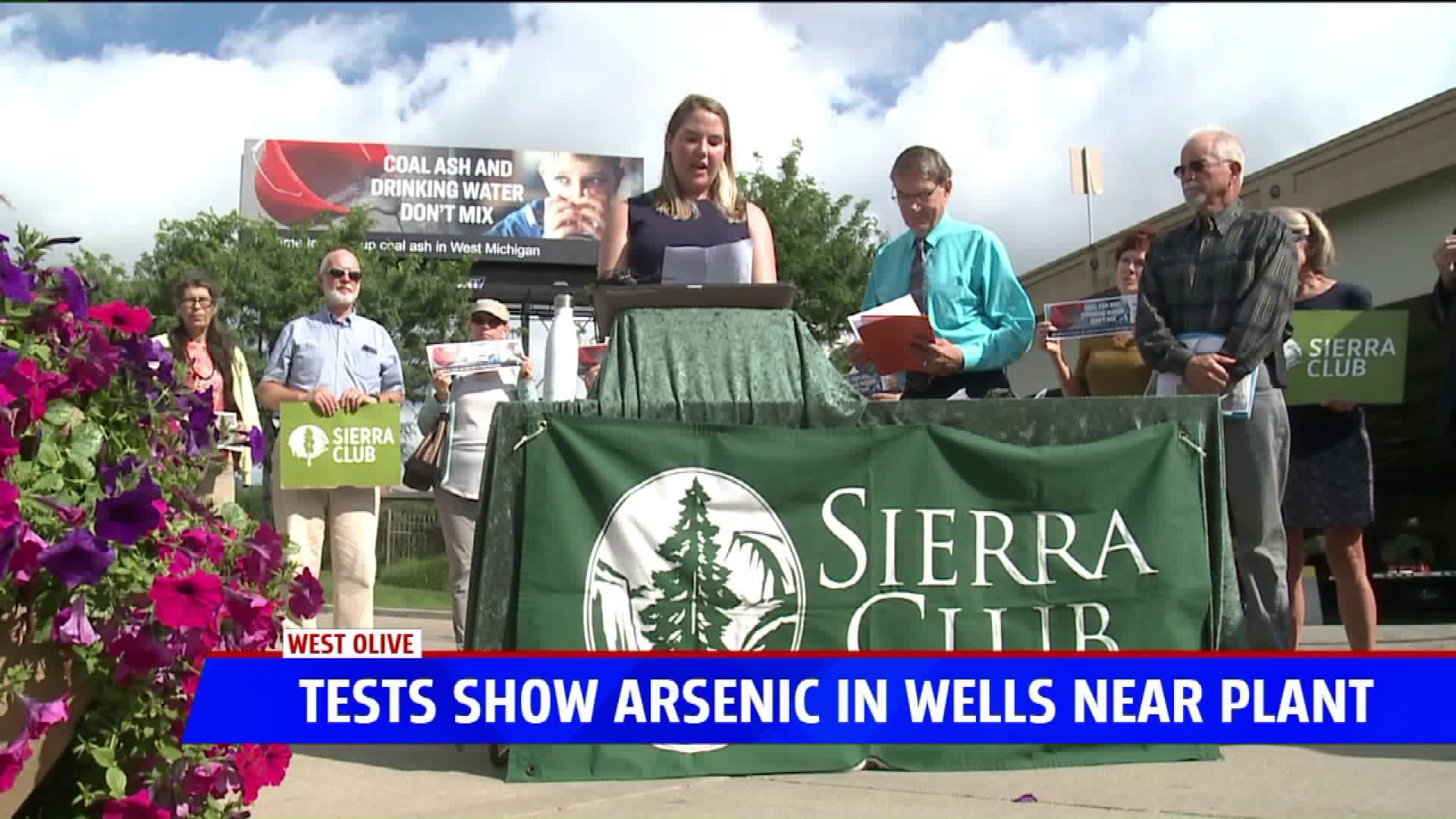 GRAND RAPIDS, Mich. — A local chapter of a nationwide environmental group is accusing Consumers Energy of contaminating drinking water in West Olive with the coal waste from its J.H. Campbell Generating Complex.

On Tuesday morning, representatives of Sierra Club Michigan gathered in front of its billboard in downtown Grand Rapids to announce results of drinking water testing of four homes on private wells within a mile of the Campbell plant.

The tests were conducted on July 1 by Pace Analytical and paid for by Sierra Club Michigan. The first home has arsenic levels over twice the safe level set by the Environmental Protection Agency, as well as elevated levels of lead and barium.

The second home tested positive for levels of barium and radium. The third house had no dangerous levels of chemicals. The fourth home had readings of arsenic and lead.

"Because groundwater pollution can migrate and move, further testing is needed of more homes in the area to determine where and how the contaminants are entering people's drinking water," Mike Berkowitz with Sierra Club Michigan said.

Berkowitz said the group made its results public, but Consumers Energy has not been contacted directly by Sierra Club as of 4 p.m. on Tuesday, according to Roger Morganstern, a senior public information director for Consumers Energy. The company was also not informed of or invited to Sierra Club Michigan's press conference.

Now, Sierra Club Michigan and the Michigan Environmental Council are asking Consumer's Energy to do testing of nearby homes and remediate any damage done to local waters. In the past, Sierra Club has petitioned for Consumers Energy to close its Campbell plant sooner than 2040.

Consumers Energy has no response at this time to the requests of Sierra Club Michigan.

Consumers Energy released a statement to FOX 17 saying in part:

"Safety is Consumers Energy’s top priority. Nothing is more important than protecting our neighbors, employees, customers and the planet we all cherish.  We’re working hard to safely handle, store and dispose of coal combustion residuals (CCRs), commonly known as “coal ash” and have removed all ash storage ponds from the JH Campbell site. All future coal ash generated will either be beneficially reused as permitted by law or placed in the state-licensed landfill facility at the Campbell site. This double-lined landfill will support the site’s expected operation through 2040 and Consumers Energy is required to monitor the site for 30 years after closure."

The statement goes on to say Consumers Energy currently tests groundwater at more than 100 well locations at the Campbell plant. The company said it sends its results to a "third-party laboratory" and there have not been dangerous levels of arsenic, lead or radium beyond it's property.

However, there have been high detections of arsenic on the Campbell plant property, Morganstern said.

He said the Michigan Department of Environment, Great Lakes and Energy has been made aware and the company is currently remediating. Morganstern emphasizes that high arsenic levels are often found naturally in the environment, citing this map.

Consumers Energy said it is working to safely store and dispose its coal waste and have already removed all ash from its four storage ponds at the Campbell plant. In June, the company pledged to eliminate coal and use 90% clean energy by 2040 as part of its "Clean Energy Plan."

In adherence with a 2015 law to regulate coal waste, Consumers Energy has made public its plans to close its waste ponds.

Charlotte Jameson, the director of energy policy and legislative affairs for the Michigan Environmental Council said the plant's four ponds that store wet coal ash are unlined, which means the waste could already be leaching into groundwater. Morganstern said that's not accurate.

“I think residents of West Olive should be moderately concerned," Jameson said. "I think obviously, any time you have high levels of arsenic and other heavy metals in your drinking water, you know we need to take immediate action to make sure folks are not experiencing adverse health impacts.”