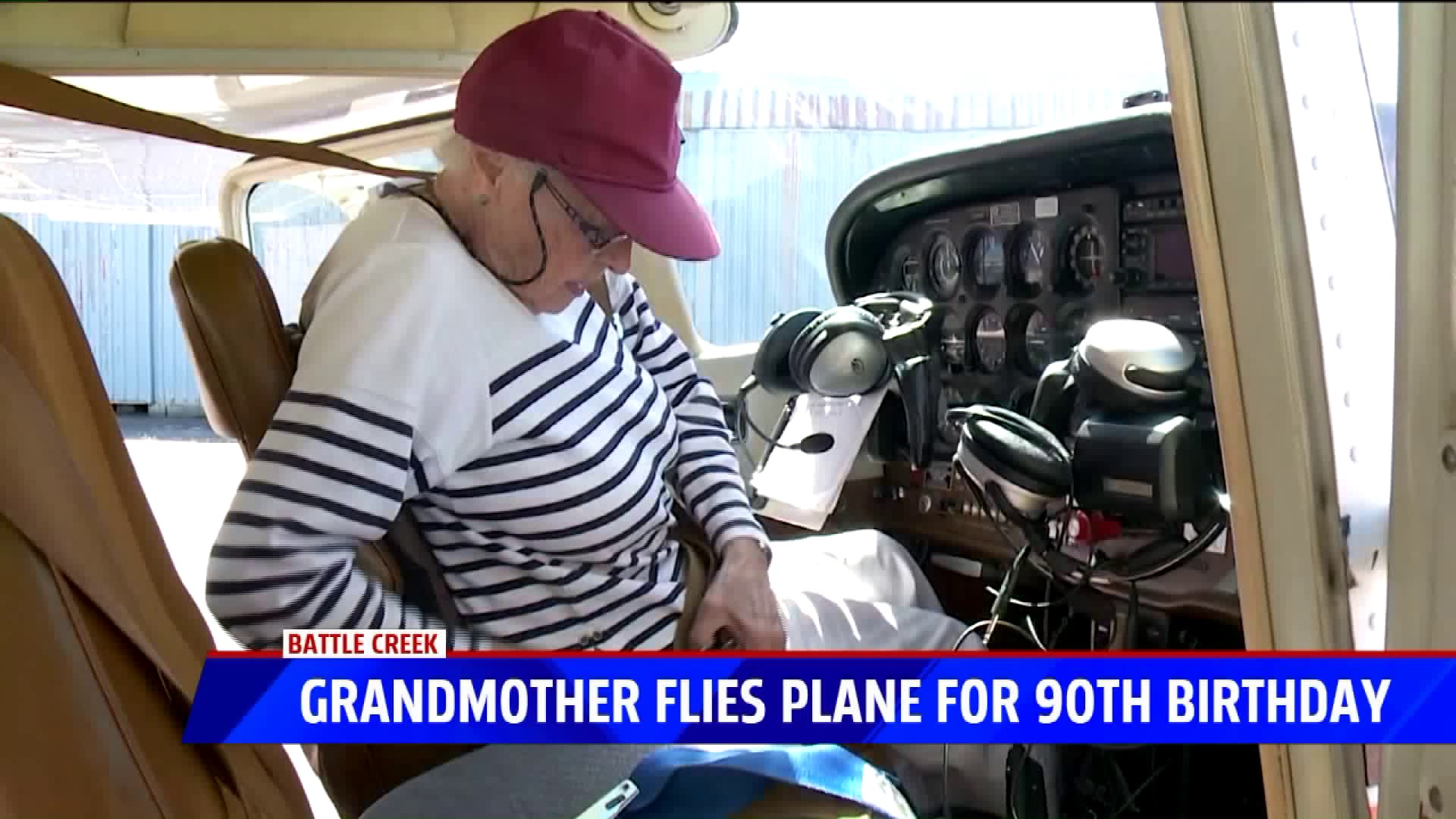 BATTLE CREEK, Mich. — Before Betty Young took off for an afternoon flight on Thursday she inspected every inch of her airplane. She checked the flaps on the wings, the oil and gas tanks and the tires below.

“I feel better climbing in my airplane than I do in my car,” Young said during an interview at the W.K. Kellogg Airport where she keeps her plane. “That’s for sure.”

She then kicked away the stops that held the Cessna 172 four-seater plane in place and pulled it out the hangar with her hands.

It’s a routine she’s been doing for decades, she said. It's what she did on Aug. 30 for her 90th birthday.

“I flew my airplane all by myself and pulled it out of the hangar all by myself,” Young said about her birthday flight to Jackson, MI. “And (my friends) all got there before I did. So, they were all waiting on the tarmac, singing 'Happy Birthday' when I got out of my airplane.”

That day they showered her with hugs and cards before eating some of her chocolate birthday cake, she said. Some of her friends, who are pilots as well, flew their own planes from Kalamazoo and Battle Creek 50 miles away to the celebration in Jackson.

Three of the pilots were women, she said. She's grateful to have friends who love to fly as much as she does.

“I didn’t start even taking lessons or flying until I was over 50 years old,” Young remembered.

Young said back then every time she saw a plane fly over her or whenever she drove by an airport, she always wondered what it would be like to fly one. So her husband encouraged her to take lessons. Immediately, she loved it.

“I used to work and felt like a lot of stress,” said Young, who was a medical technologist for years. “So I would come out here and jump in my airplane. And as soon as I got in the air you know all that stress just falls off and your just thinking about flying.”

The day she got her pilot's license, her husband went out looking for a plane to buy her, she said.

"He was very supportive," Young said. "He was not a pilot. He’d had a few lessons but didn't continue. But he wanted me to fly."

She’s been flying ever since and feeling that peace every time she’s up in the air.

“I don’t have any philosophy of life,” Young said. “I guess I’ve enjoyed so many things and I’ve done so many different things, had so many opportunities, (I've) been very lucky. Very lucky.”