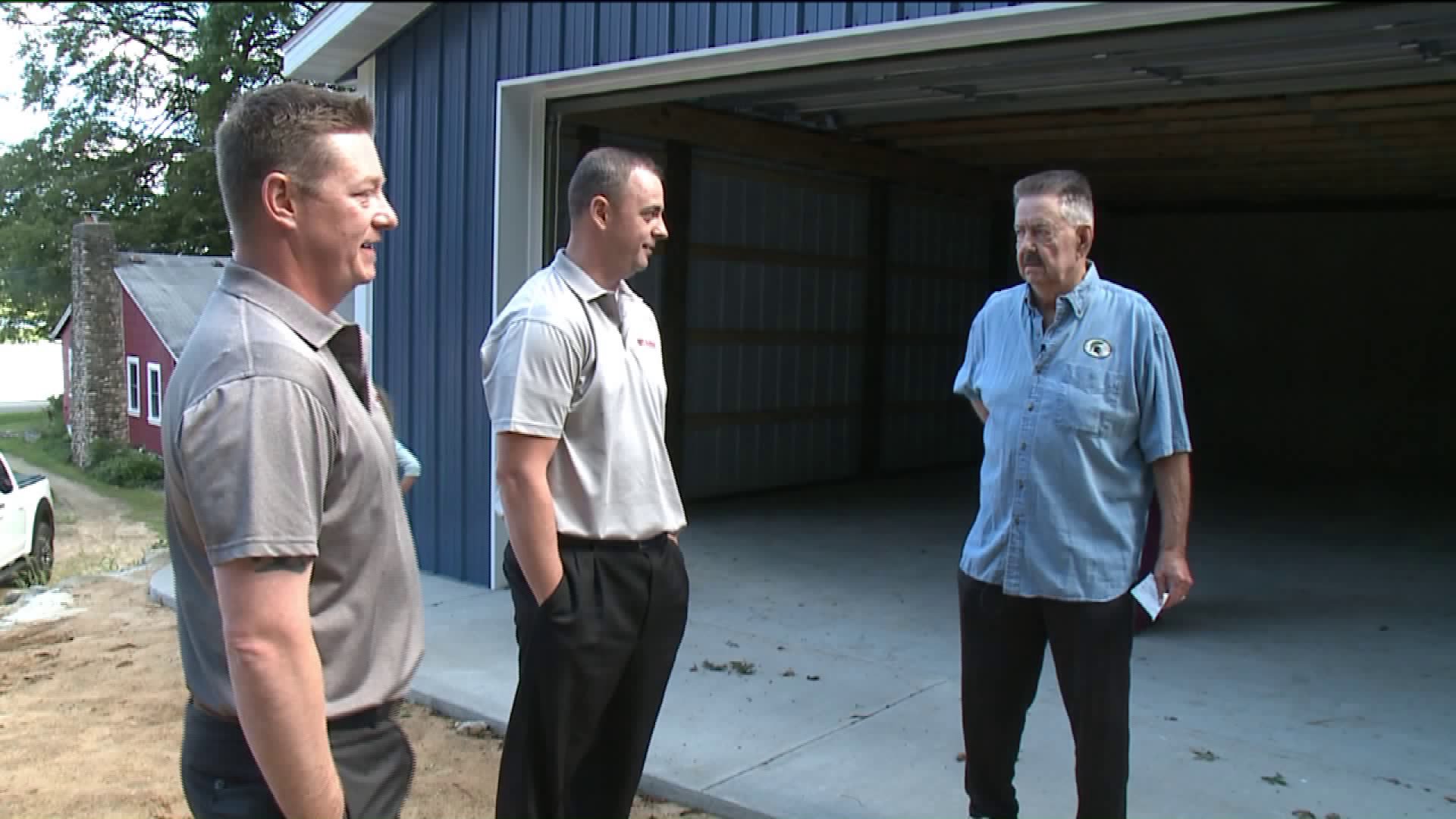 GOBLES, Mich. — A West Michigan business decided to pay it forward to help a Vietnam veteran featured by the FOX 17 Problem Solvers.

The Problem Solvers caught up with veteran Ron Cummins to do an update on his situation with a no-show contractor. However, he had no clue he would end up with a $5,000 check placed in his hand.

Living on a limited income, Cummins says he dipped into his savings to build a pole barn at his cottage in Gobles. He wanted a place to store his Jeep and boat. However, he said the $5,000 down payment disappeared, along with unlicensed contractor Scott Hennig, who never started the work.

Cummins said he had to borrow another $5,000 from his son for the project since Hennig never gave it back.

"I think about it all the time," he said. "I got ripped off. But it's basically my fault for writing the check out in his name, but I thought the guy was honest."

Little did Cummins know, a couple of Kalamazoo businessmen were about to restore his faith in humanity. The owners of Kalamazoo Excavation saw the original story and reached out to the Problem Solvers.

"We heard about your story, and it touched us and we want to say thank you for your service and we want to present you with a check to make you whole," Kalamazoo Excavation co-owner Brian Methner said while giving Cummins the check.

Cummins replied, "Thank you very much gentlemen. I appreciate it very much. I mean this is, not expected. So there is good people out there?"

Methner, a veteran himself, and his business partner Ryan Rarick, said Vietnam veterans are heroes and should be treated as such.

"Not until 9/11 did we begin to appreciate, in my opinion, veterans around this country and we look at how the Vietnam guys were treated when they came back. It wasn't right. It wasn't fair, and we got a long way to make it up to them," Methner said.

Rarick, co-owner of Kalamazoo Excavation said, "It's hard to believe that there would be people out there that would rip people off for their own good, knowing the position it's going to put somebody in."

He added, "We're fortunate that we've been ... doing well enough to be able to help somebody out in need.”

Cummins chuckled, "It's better than Christmas."

"I really thank 'em both for everything and everybody," he said.

Cummins also got to share the good news with his wife who also felt the pain of losing a big chunk of their savings.

She exclaimed, "Oh my God, Ronnie!"

"Thank God, ya know? Yes. Cause I know he went through a lot. Thinking about it all, and I know there was a lot of sleepless nights," Joan Cummins said.

Cummins said he'll put the money to good use by paying his son back. As for Hennig, Cummins said he heard from after the first story with an empty promise to refund his money, However, he hasn’t received a check.

If you'd like to give toward a veteran cause you can go to kalamazooexcavation.com and give them a call or send a message.