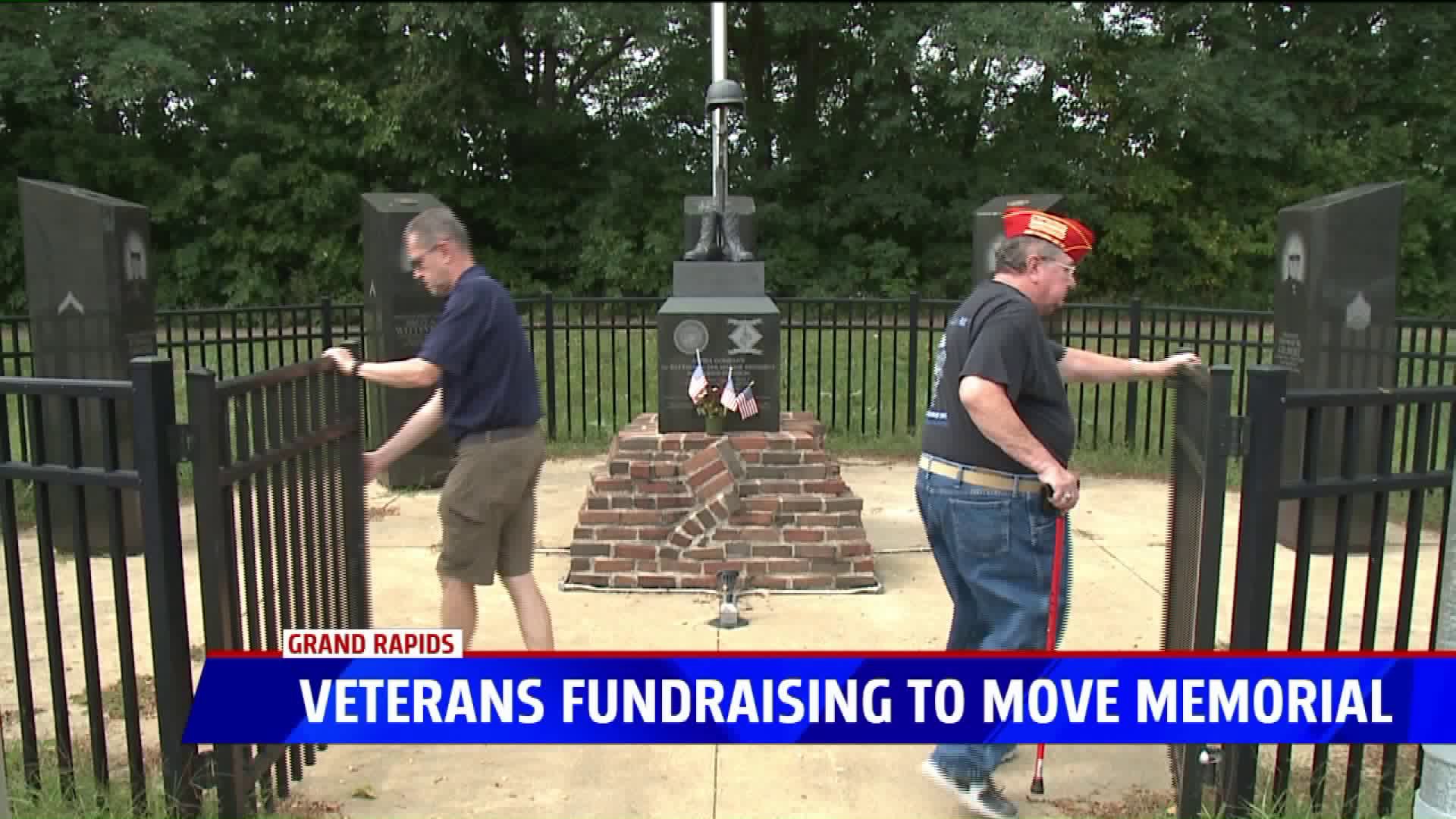 GRAND RAPIDS, Mich. — A group of veterans is asking for help to make sure five Marines killed in Iraq are not forgotten.

Thomas Gilbert, Jonathan Thornsberry, Brett Witteveen, Jacob Neal and Bufford Van Slyke were killed in action during their 2006-2007 deployment to Iraq. A memorial honoring their sacrifice currently stands outside a Marine Reserve unit on Monroe Avenue.

Alpha Company, 1st Battalion, 24th Marine Regiment, 4th Marine Division is relocating to Battle Creek at the end of the month. The building is being repurposed and it would be too expensive to bring the memorial to Battle Creek, so it needs to be moved elsewhere.

Veterans with Fred Cochran Detachment 151 are trying to raise $75,000 to move the memorial 1.6 miles down the road to the Grand Rapids Home for Veterans. A GoFundMe page has been set up to collect the funds.

“That space should help very much in terms of being a space for quiet contemplation, helping heal, bringing some sense of closure to the families because the families of these fallen marines, people being people have reacted very differently to the loss of their sons," Retired Navy Capt. Paul Ryan said.

The memorial is made up of five 1,800-pound granite pillars surrounding a brick platform supporting a metal sculpture of military boots, helmet and gun. The bricks were brought back from Al Fallujah, Iraq, where the men were killed.

The memorial was erected 10 years ago.

“Members of this unit that served with them in Iraq knew them. They come by here periodically," Wayne Luznicky said.

Luznicky is a Marine who served two tours in Vietnam. Though he didn't know the five Marines from this memorial, he insists on fighting to preserve their memory.

“A fellow Marine gets killed in action, it bothers me," Luznicky said. “We look out for one another. It doesn’t matter if you served in WWII or you just finished boot camp today.”

The five Marines were all about the same age when they were killed. Some of them graduated high school in 2001.

“Hard to know but I gotta believe that at least some of them, some of the guys in the company of this deployment joined because of 9/11. There’s no doubt in my mind," Ryan said.

While visiting the memorial on Wednesday, Luznicky recalled what went through his mind 18 years ago.

“When 9/11 occurred, I was sitting at my desk in my office and I was almost crying with frustration because I was too old to join the fight," Luznicky said. “It’s hard to put it in words. I’ve stated before that, why them not me?”