Martinez runs all over EGR defense in Muskegon win 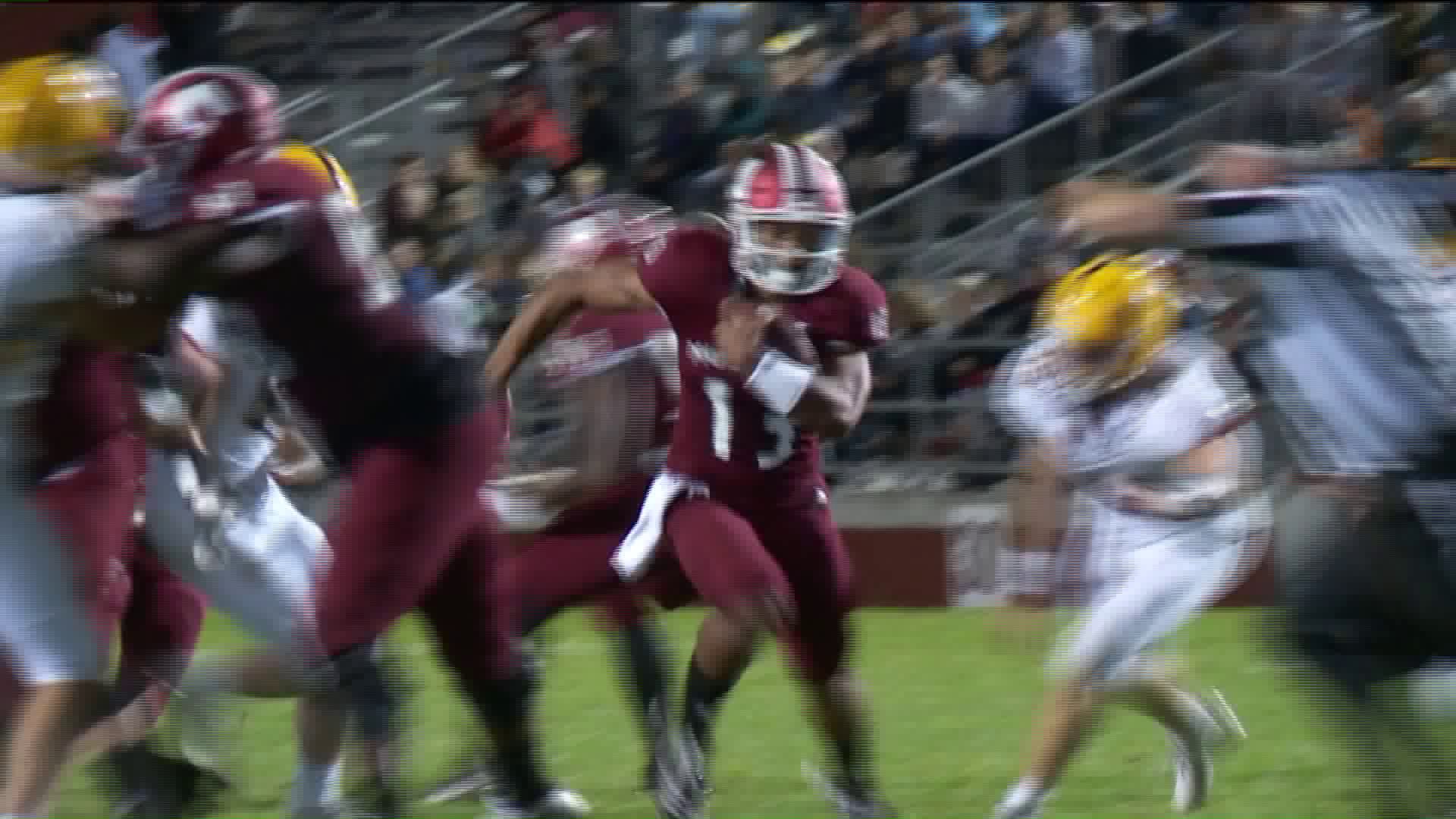 The Big Reds (3-0) won their first home game of the year 28-23 after earning victories against Warren De La Salle and Detroit King on the road the first two weeks. Martinez finished with 240 yards rushing on 27 carries with three touchdowns.

While preparing for the game, Muskegon head coach Shane Fairfield said Friday’s matchup against the Pioneers (1-2) was their toughest game yet.

“I knew that what they do defensively really gives us fits at times, but we needed this,” Fairfield said. “I think this was good for us to have the two that we blew out and then a game to bring us to reality and show our guys, ‘hey, we can win the close ones too.’”

Muskegon got the ball with less than five minutes to go while clinging to a 28-23 lead after a miraculous touchdown catch by East Grand Rapids senior receiver Jack Mundell.

Even though the Pioneers had all three of their timeouts, Muskegon was able to keep the final drive alive thanks to Martinez’s legs. He gave credit to his teammates’ blocking, but accounted for several first downs by finding holes and breaking tackles.

“I just know I can trust them through anything,” Martinez said of his teammates. “Anything we go through, I know that they have my back and I got their back, and you can see that tonight how we were able to finish it out.”

His coach was more willing to give him more credit for the success.

“He is special, you’ve seen that,” Fairfield said of Martinez. “He is so patient, I think some guys would grab the ball and be so anxious to go, they would just run up in there and get tackled. He is so smooth and patient and confident in his ability to start, stop, change direction and then accelerate.

“And then he knows where the sticks are, and I think he just plays that game.”

A few minutes into the second quarter the game appeared to be on the way to a blowout after three turnovers set up Muskegon touchdowns.

East Grand Rapids opened the game by smoothly advancing the ball deep into Muskegon territory — until an interception by sophomore defensive back Myles Walton turned the momentum in the Big Reds’ favor.

Walton’s return set up Muskegon’s offense with great field position that was immediately taken advantage of. On the first play, senior running back Tommy Watts burst through the line and outran the entire defense for a 51-yard touchdown.

The turnover issues would continue for the Pioneers on the next possession. After some productive plays, East Grand Rapids’ progress came to a halt when a tipped pass ended up in the hands of junior linebacker Kolbe Lewis.

Once again, Muskegon’s offense didn’t waste any time putting points on the board — marching to the end zone in just 1:06.

On the first play of the drive, Martinez broke off a 32-yard run to move the ball near midfield. He would score shortly after on another 30-plus-yard-run. A missed extra point attempt left Muskegon’s lead at 13-0.

With 17 seconds to go in the first quarter, East Grand Rapids put the ball on the ground during a read-option play and the Big Reds came up with it.

Martinez capitalized on the opportunity less than two minutes into the second quarter, capping off the drive with a 12-yard touchdown run to give Muskegon a 20-0 lead.

It took an entire quarter, but the Pioneers offense was able to maintain a full possession in the second quarter. They were rewarded for their ball security with a long touchdown on a screen pass to senior running back Jack Shelton, making the score 20-7.

After getting a stop, the Pioneers methodically made their way down the field again using up nearly all of what remained in the second quarter.

The hard work almost went to waste on a contested pass over the middle that appeared to be destined for an interception, but senior receiver Jack Sheridan saved their progress by snatching the ball out of the defender’s hands.

East Grand Rapids knocked in a field goal with four seconds left to make the score 20-10.

After both teams exchanged punts for the entire third quarter, Martinez found the end zone for a third time on a 21-yard run and then converted the two-point conversion to give Muskegon a 28-10 lead less than a minute into the fourth quarter.

At that point, the comeback was on. East Grand Rapids cut the lead to 28-18 on a sliding touchdown catch and a two-point conversion.

The Pioneers recovered an onside kick to immediately get the ball back and took advantage of a Muskegon mistake.

With 5:16 to go, Muskegon intercepted a pass in the end zone that likely would have guaranteed a win, but the play was called off due to a penalty. East Grand Rapids made the most of the opportunity with Mundell’s diving catch of a batted pass.

Unfortunately for the Pioneers, that would be the end of the comeback as they were unable to get the ball back.