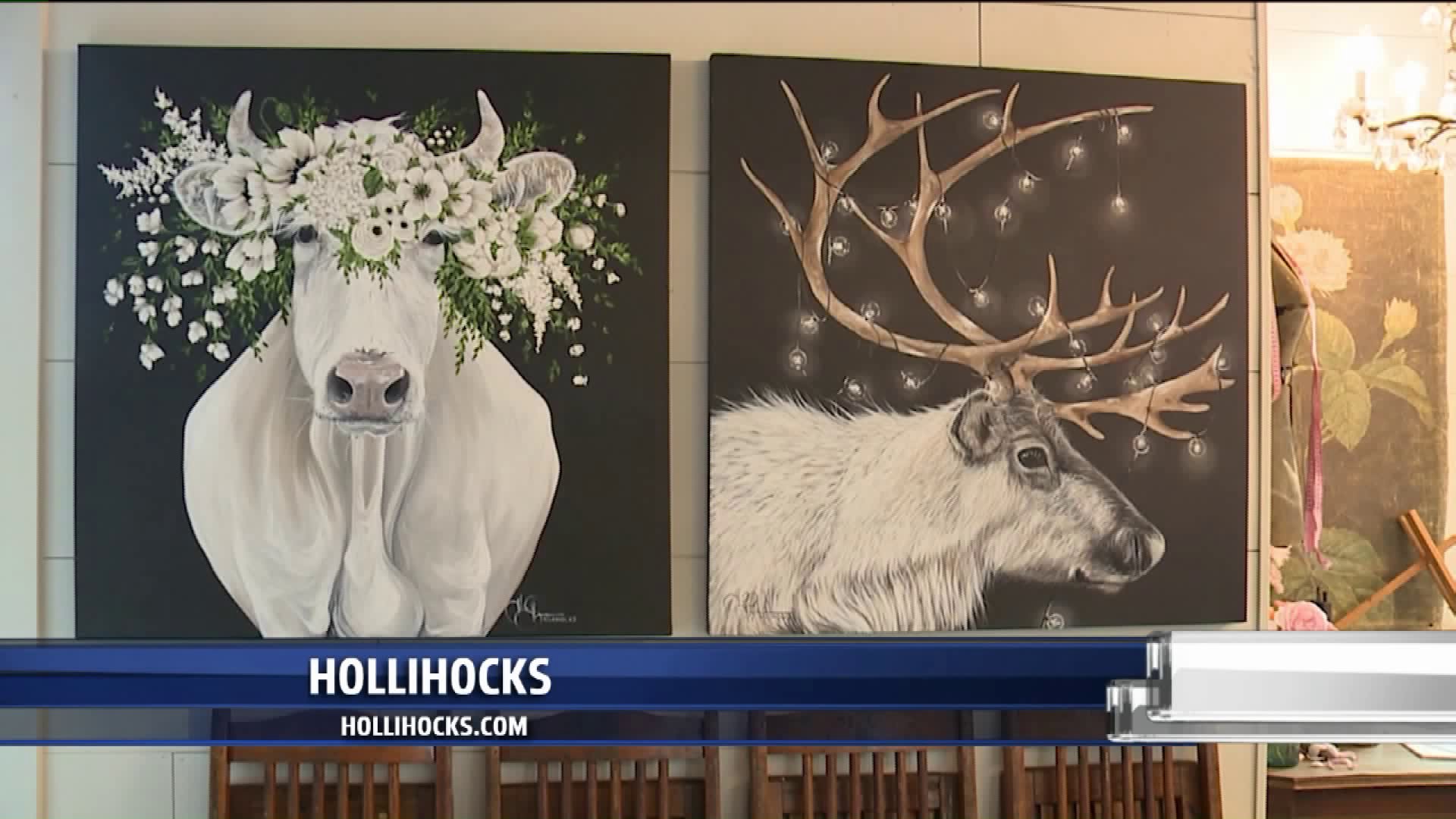 Nothing is worse than when a fire burns deep in your heart, a passion for something, and someone dampens your flame.

That’s exactly what happened for Caledonia mom, Holli Huyser, when a college guidance counselor said the odds of Holli painting for a living, were “slim to none”. Basically, she was told to focus on a different creative outlet to make any kind of living. Disappointed, Holli believed what she was told. So how did her work eventually catch the attention of Hobby Lobby?

As far back as kindergarten, Holli’s work was award-winning. You see, she actually got a scholarship, when many of us are just learning our ABCs. She was given the opportunity to do art classes at Kendall College as a prize! Painting is in her blood; her grandmother was a painter when she wasn’t busy chasing 9 kids. Holli has many of her grandmother’s paints, brushes, and easels in her Caledonia home studio.

The studio is a piece of shabby chic artwork itself! We’ll get to that in a bit.

Holli would paint murals here and there but eventually landed a good job doing customer service for one of her clients. Meanwhile, a lot of love and attention went into raising her children and being a wife. For quite a long-time, Huyser worked in children’s ministry, with the creative side of it becoming more of a love than the administrative side.

Holli’s husband knew something was missing: her artwork.

He eventually became very adamant, telling Holli that she was to get a job using her creativity, there was no arguing it! His support was all she needed to get the creative juices flowing once again.

She dabbled in craft shows, blending in a love for antiquing, becoming a vendor in the fabulous Hudsonville store called The Found Cottage, 2460 Chicago Dr.

Soon, the brushes dipped back into the paints, more and more; Holli was creating once again! She is now the proud owner of Hollihocks, operated out of her home.

It was on Instagram where she was discovered, where she found “her people”. The buyer for Hobby Lobby took note of her whimsical, unique paintings, approaching Holli about licensing her work. As you can imagine, she was hesitant for fear that she was “selling out”.

But at the end of the day, Holli knew it would be for ladies who are on trend, to decorate their home and still be able to put shoes on their kid’s feet. Now, thousands of homes have a copy of Pearl the Cow or Dolly Llama.

Just as impressive as her work is the studio space where it all comes to life. By looking at photos, you would think it’s a 150-year-old farmhouse, when in fact, it’s a modern home with all of Holli’s shabby chic touches.

Her picker friends take good care of her, from the antique door that leads into her space all the way to the dozens of original tin tiles that make up the ceiling. Always in the mix of it all, is her four-legged pal, Ruby, who usually finds great comfort on an antique couch.

Well, Holli, who I now want to call Holli Hobby Lobby (bad joke, I know) kudos on following your heart and sharing your talents with so many.