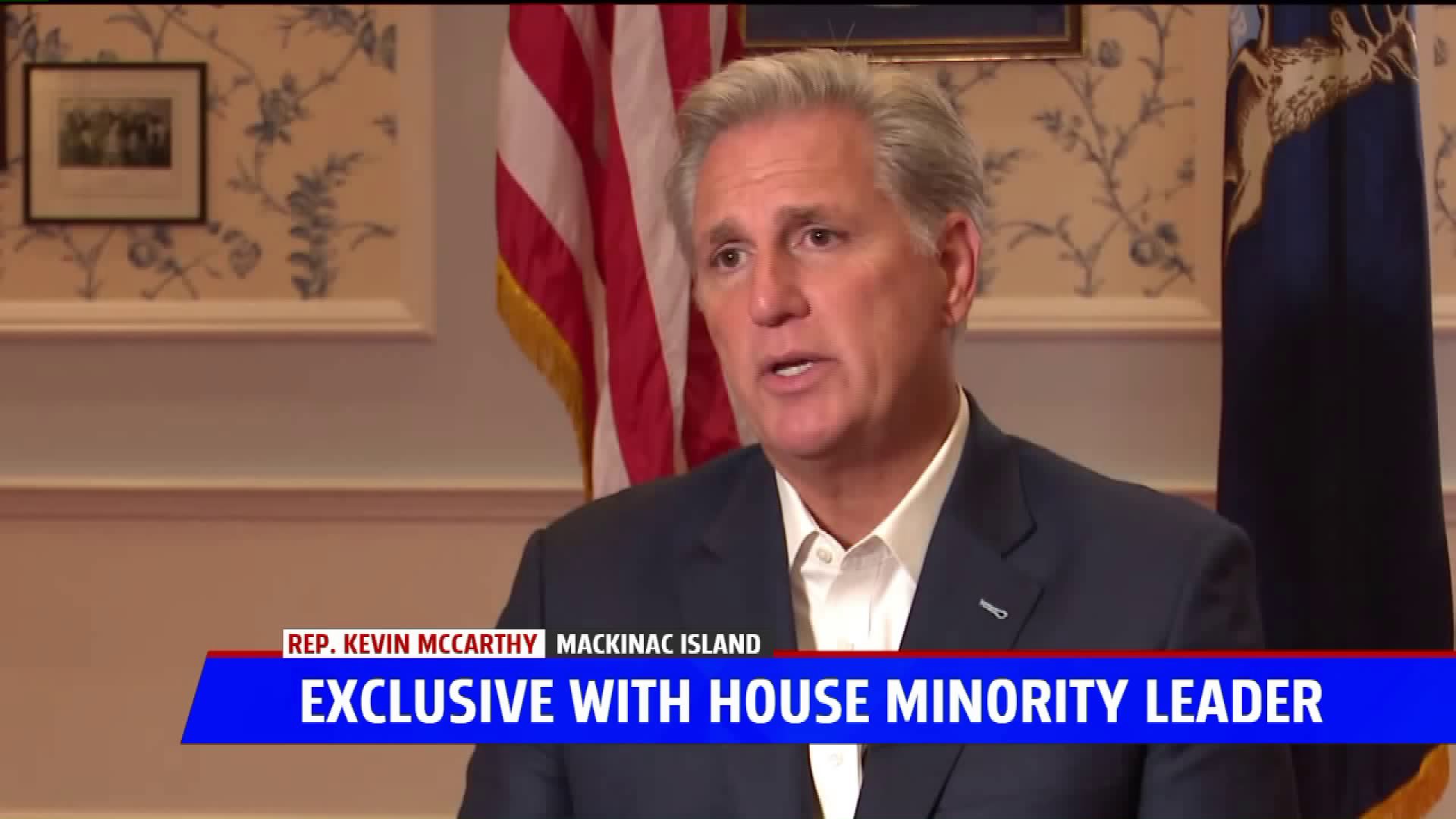 MACKINAC ISLAND, Mich. — U.S. House Minority Leader Kevin McCarthy believes the future of American trading power comes down to a decision that is yet to be made by House Speaker Nancy Pelosi.

McCarthy has been pushing for Pelosi to bring the United States-Mexico-Canada Agreement (USMCA) to a vote.

"You know just last month, Mexico became our number one trading partner," McCarthy tells FOX 17. "Canada became number three. How much stronger would we be if we had USMCA going in, with our first and second strongest traders negotiating with China. Think about it for a moment if we had nothing and as China's economy gets bigger, their military gets stronger, we would not be in a strong position to make some change or difference."

Under President Donald Trump's trade war with China, U.S. farmers have taken a massive hit. Billions of dollars in federal government subsidies have been distributed to affected farmers, thousands of whom come from McCarthy's home state of California.

When asked if he's confident that Pelosi will bring the USMCA to a vote before talks with China are set for November, McCarthy said no.

"I'm not and that's what's so fearful because one person has so much control," McCarthy said. "The USMCA hangs in the balance of Nancy Pelosi. It will pass if it comes to the floor and we know right here in Michigan how much stronger the state will be. If for any reason this does not get called up, all the blame is on Nancy Pelosi."

Pelosi said she believes there are good things about the USMCA but her main concern is what she called a lack of enforceability to the agreement. Pelosi told reporters earlier this month she believes an agreement can be achieved.

McCarthy insists Democrats are at an existential crisis going into 2020.

"It's a fight for the soul of the Democratic Party," McCarthy said. "Do they go so far left? And I believe that's out of step with America. Something just recently happened. There were two special elections. Republicans won them both. One, I'll give you that we should have won. The other one, it should have been much more competitive."

However, Republicans aren't exactly on solid ground in West Michigan following Rep. Justin Amash, I-Grand Rapids, move to leave the Republican party but still run for re-election, leaving many to speculate his independent run will split the conservative vote and hand Michigan's 3rd Congressional District to Democrats for the first time since 1992.

McCarthy said Republicans can pull through and avoid a conservative split.

"I do not think that Justin Amash will be elected again," McCarthy said. "He's gonna have to run on his record and I think people have to sit back and say, what has he accomplished? And I think that would be very difficult for them. Maybe he wants to run to try to be a spoiler but I don't think that will be it at the end of the day. I trust the people. They're smarter than that. They'll look at the candidates and they'll look at who can actually represent them. This is an important job. It's not one to take lightly. It's not one to make fun of."

In recent days, news has surfaced of a whistleblower complaint against Trump and his personal lawyer, Rudi Guiliani allegedly using Ukraine against former Vice President Joe Biden. While much of the matter is convoluted at this point, some congressional Democrats are calling for an investigation into whether or not the president used the leverage of the executive branch to get a foreign leader to investigate a political rival.

Some Republicans, including McCarthy, believe Biden should be investigated over claims that he bribed Ukrainian leaders to fire a prosecutor investigating Biden's son.

At this point, the substance of these accusations has not publicly materialized but McCarthy said he's convinced Democrats will pursue an investigation.

"Adam Schiff, who only cares about politics, who is upset about the last presidential election seems to put the country through these type of nightmares time and again," McCarthy said.

In a statement, Pelosi called the whistleblower "reliable" and said the complaint raises "grave, urgent concerns for our national security."