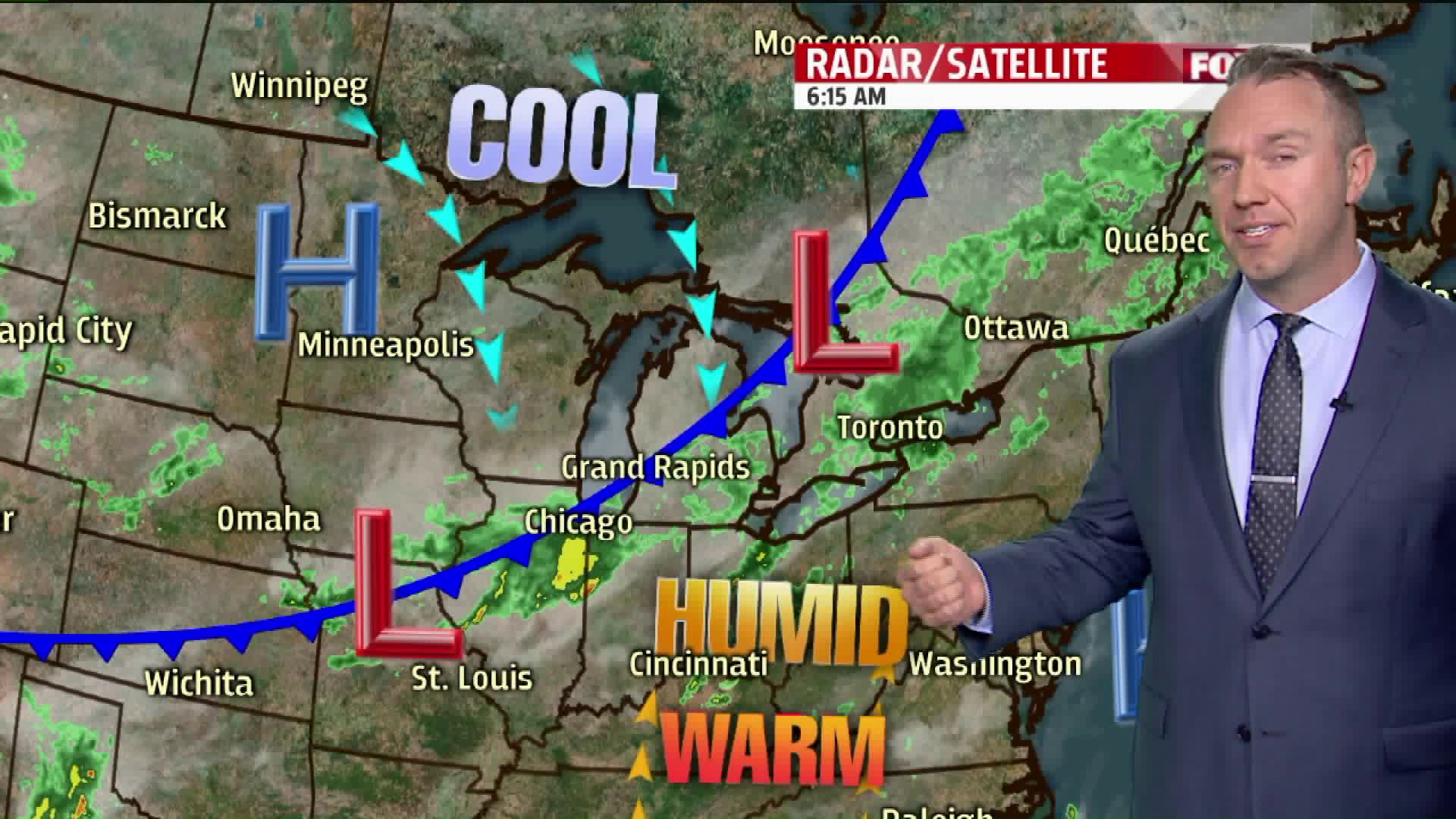 WEST MICHIGAN-- A gloomy open to the day we have certainly seen here on Saturday with a thick overcast and pockets of light rain around the region, particularly nearby I-96 and southward.

Some drier air works in from the north as we go along late this morning shutting down rain prospects for the afternoon from I-94 and northward. A few showers will still be possible in counties adjacent to Indiana as these locations will reside in closer proximity to the cold front that has produced out inclement weather over the past 24 hours. Temperatures will peak in the upper 60s for most of us this afternoon.

Expect mainly dry conditions for the overnight period tonight as lows drop into the low to mid 50s. The aforementioned cold front heads back northward slowly as a warm front on Sunday resuming the chance for some scattered showers mainly late morning and into the afternoon. A thundershower or two will be possible though severe weather is not anticipated. Lots of clouds will be around for the back half of our weekend keeping readings relegated to the mid to upper 60s for highs.

This warm front continues further northward through Monday morning and the floodgates open across West Michigan to a very warm and humid late September air mass with temps headed for the middle 80s to start the new workweek. Any showers around early in the day should come to an end fairly quickly with the progression of the warm front off to our north. Skies will give a mix of sun and clouds for the afternoon as south to southwest winds go breezy helping to usher in the well above normal regime into West Michigan.

Tuesday looks to provide partly sunny skies as the same warm and humid air mass stays overhead. We should reach the low to mid 80s for a second straight day from Grand Rapids to Kalamazoo and Battle Creek southward to the Michigan / Indiana state line. Though an isolated shower or thunderstorm cannot be ruled out across areas north of Grand Rapids on Tuesday, the best chance for the return of more notable showers and thunderstorms will be Tuesday evening heading into Wednesday morning. The warm front that will have brought us all the warm and humid conditions heads back southward as a cold front at this time.

The movement of this front looks to be slow enough to allow for a rather prolonged period into Wednesday where the chance for wet weather will be possible. Models are showing the prospect for some decent rain tallies once again. There are some indications that a wave of low pressure may try to develop along this front and linger some rainfall into Thursday. Nonetheless, Wednesday will serve as a transition day to much cooler air for the late workweek time frame. Highs on Wednesday should be in the ballpark of 70 degrees with highs on Thursday and Friday very possibly not getting out of the upper 50s. Parts of the viewing area could be set up for a frost by Friday night into Saturday morning.