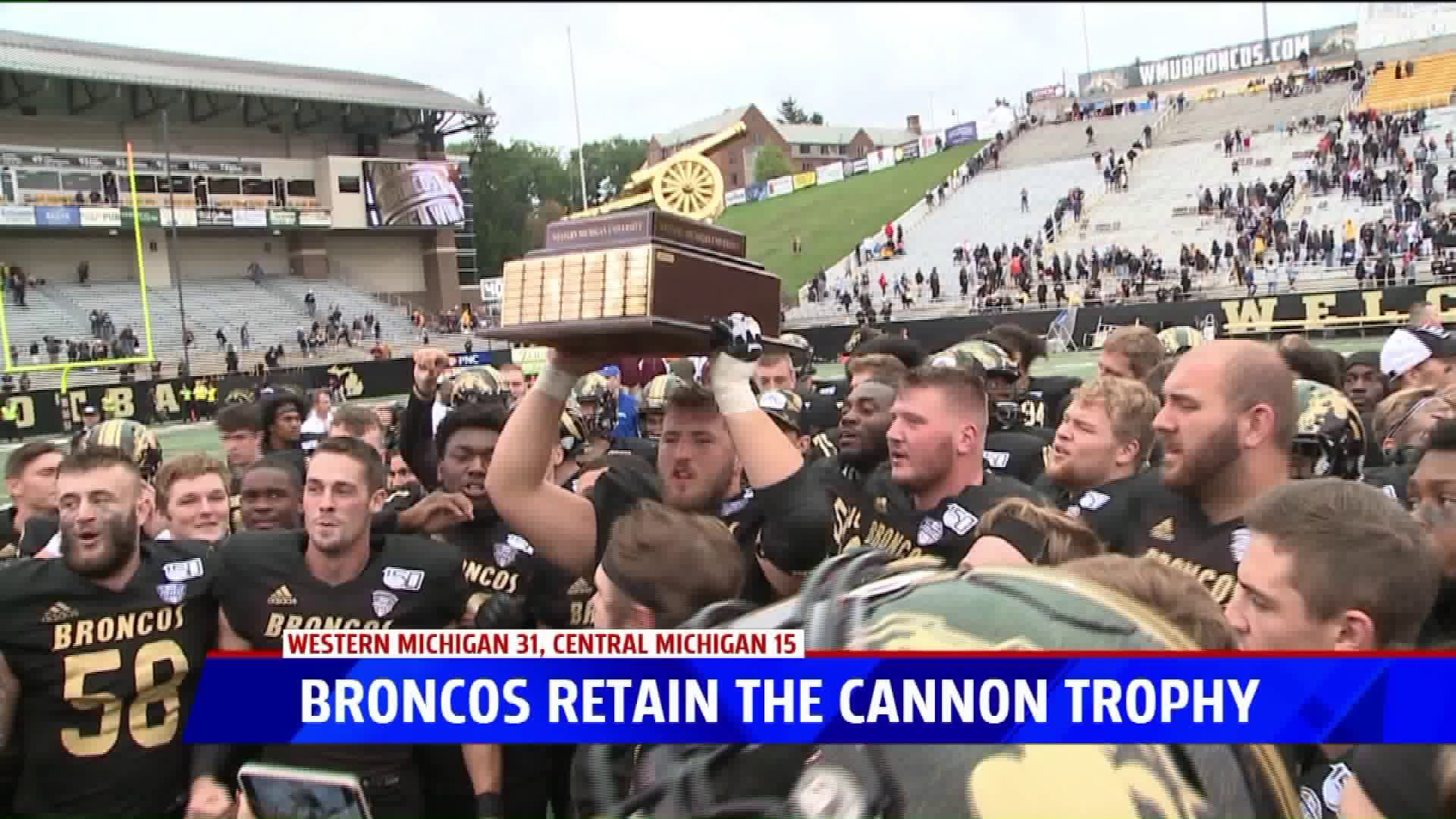 The Broncos retain the Cannon Trophy

Senior quarterback Jon Wassink completed 18-of-29 passes for 244 yards and two total touchdowns and running back LeVante Bellamy added 105 yards and a touchdown.

WMU head coach Tim Lester said he was happy with his offense’s efficiency in limited snaps.

“Offensively, we knew we were going to get limited touches, they were in no hurry. We only got 66 plays, we knew it was coming, so we had to take advantage of what we got,” Lester said.

Self-inflicted mistakes cost CMU on both sides of the ball. The Chippewas had seven offside penalties on defense and three turnovers bring promising drives to a screeching halt.

After the game, Lester said part of the game plan was to try to draw the defensive line offside.

“There was video evidence of offsides, so we planned on going on multiple cadences a lot,” Lester said. “I didn’t know if it would work … but it was working well and it’s great discipline from our offense not to jump.”

Central Michigan’s opening drive ended in a turnover when junior quarterback David Moore threw into triple-coverage, leading to a tipped ball that ended in the hands of WMU’s Patrick Lupro.

The Broncos immediately turned the opportunity into points. It took their offense four plays to cover 59 yards to the end zone, finished with an 11-yard run by Bellamy.

On its next drive, CMU went 66 yards to the Broncos’ 9-yard line before the defense forced a fourth-and-3. The Chippewas tried to trick the defense by snapping the ball to Kobe Lewis in the backfield while Moore pretended to audible but were stopped at the line of scrimmage.

“When we get into those situations, (the defense) is coming and making big plays and forcing turnovers,” Lester said. “That’s the kind of things we need to do because they did drive the ball a little bit … but when crunch time came, our guys stepped up.”

Western converted the next drive to points with a 25-yard field goal after eight plays and 66 yards assisted by three offside penalties on the defense.

The Chippewa defense got its first stop midway through the second quarter by intercepting Wassink at the 4-yard line. But they were back on the field quick after the offense went three-and-out.

“It was just supposed to be a five-yard pitch-and-catch and I was able to do something with it,” Ricci said. “We joked on the sideline that I finally broke a tackle, so that was awesome.”

CMU was stopped twice on fourth-and-short situations inside the red zone in the first half. The first led to a field goal and the second gave Western a three-score lead at halftime.

“As far as what that did for us as a defense, you see that energy, the enthusiasm, the excitement,” senior safety Justin Tranquill said. “That’s something we feed off each other just on defense in general, so (there’s) just a lot of excitement when something like that happens for us.”

In the third quarter, the Chippewas’ self-inflicted wounds continued by losing a fumble on their first offensive possession. The defense was able to force a punt, but a 15-yard penalty for roughing the kicker brought WMU’s offense back on the field.

WMU maximized the extra plays by finishing the drive off with a 1-yard dive by Wassink to extend the least to 24-0.

CMU’s offense was finally able to score in the fourth quarter on a drive that was propelled by 30 yards in unsportsmanlike conduct penalties and a 21-yard pass to senior running back Jonathan Ward.

The drive was ended with a 1-yard touchdown run by Lewis and a failed two-point conversion after a successful attempt was called back due to an illegal formation penalty on the offense.

“We had too many penalties — period. I’m upset about it and I’m going to get it fixed, our kids are embarrassed about it,” Lester said. “… In order to make the run we want to make, we really gotta be better in that category.”

Central Michigan got a stop and tacked on a field goal to bring the score to 24-9 midway through the fourth quarter.

Western didn’t waste time getting back into the end zone, as the Broncos used four plays to go 76 yards and score again to bring the lead to 31-9.

CMU responded with a quick touchdown drive of their own through the air. On the drive, Moore went 6-of-7 for 75 yards, finished with a 34-yard touchdown to junior receiver Jacorey Sullivan. A failed two-point conversion made the score 31-15, where it would finish.

Lester said the silver lining of allowing 15 points in the final quarter was that it allowed his team to get experience in close games, which ahs been difficult to come by so far this season.

“We’ve just had such a unique year in that we’ve really ran away with two of them and got ran away with once, and we’ve gotta play close games,” he said. “When you play good teams, you’re going to be into the fourth quarter.

“So when it got close, I was kind of happy … we need to be in those situations, we need the defense to be in fourth-and-1s with the game on the line like that last one. I want them to feel excited about that.”