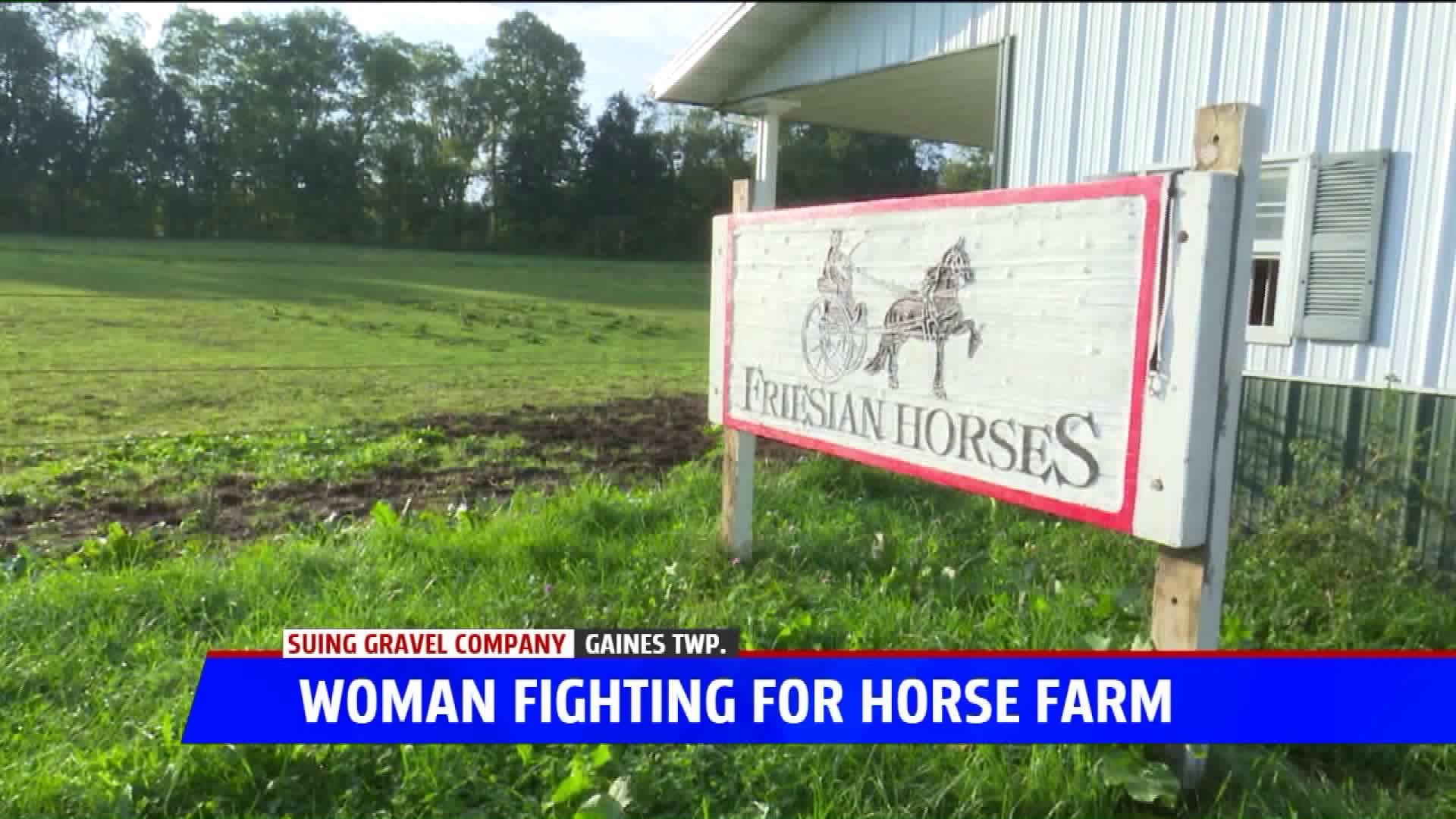 GAINES TOWNSHIP, Mich. — A horse farm in Gaines Township is suing a mining company over its plans for a gravel pit next to the property.

Doretta Anema, owner of Anema Family Friesians, bought her property more than a decade ago. At the time of purchase, she was encouraged by the property's zoning, which she assumed would protect the land for agricultural purposes.

More than a month ago, Gaines Township voted to approve a change in the zoning, which would allow Stoneco's mining operation in the area. The approval gives Stoneco the ability to mine gravel in a 40-acre parcel next to Anema's horse farm near the intersection of Kalamazoo Avenue and 100th Street.

Anema fears the mine will kick up dust and cause loud noises from equipment. In turn, she worries it could scare her horses and put the riders at risk.

"This is my livelihood," said Anema. "The things I do here are absolutely dependent on the safe environment."

Anema has collected signatures for the past several weeks in hopes of presenting a petition to the township. If the petition meets the requirements and the necessary count of 1,742, the township must put the decision to a vote on a ballot.

Anema has also submitted a claim of appeal in Kent County Circuit Court against the township, which will require a hearing in front of an independent judge who will determine if the planned gravel pit will have 'serious consequences.'

Stoneco disagrees, saying they have had few complaints in the last several decades of mining in Gaines Township.

"We have a lot of history with mining very close to horse farms at this site other locations. We have had no problems," said Ken Vermeulen, attorney for Stoneco.

Vermeulen says the current site being mined in Gaines Township is actually closer to the horse farm than the planned will be during the first two years of operation.

Both Vermeulen and Anema say they have suffered monetary damages and have been forced to change immediate plans during this battle between the two.

"I am concerned with the delay to StoneCo, but also it is very expensive to the township to continually battle this," said Vermeulen.

"This is not just huge for my business and my livelihood," said Anema. "I am a single mom with five kids. This is literally crushing me."

Ultimately, the fight could be left up to judge to decide what's fair in this case.

In the Michigan court system, there is precedent to side with gravel pits. Vermeulen says as township ordinances and legislation stand currently, mining must be allowed in most cases unless there are very serious consequences.

If you would like to sign the petition, you can contact Anema here. The petition must be signed in person and can be done on her farm or at the Hub Cap Tire & Wheel off of Division.