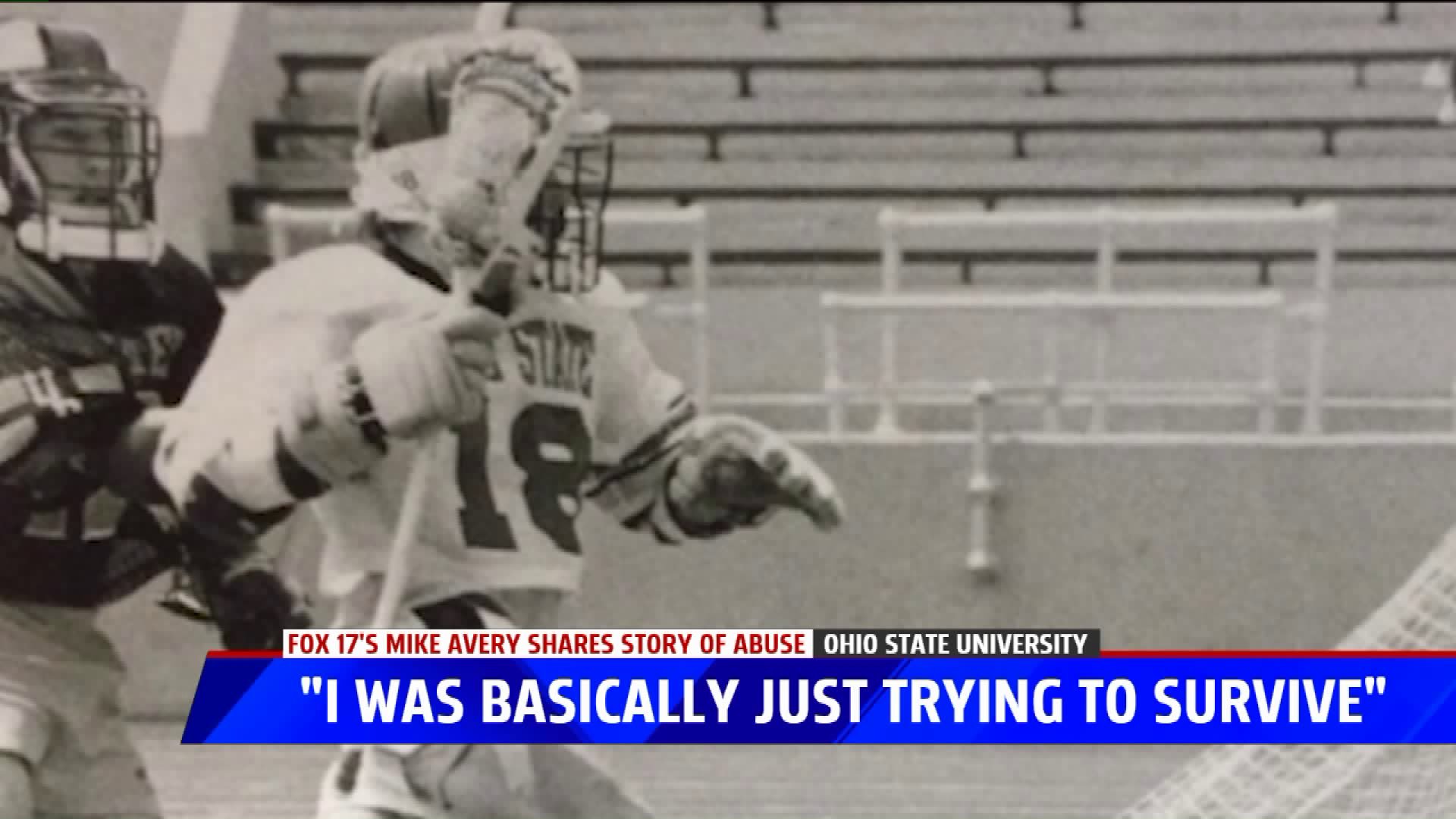 COLUMBUS, Ohio — An investigation continues into a now-deceased doctor at Ohio State University who sexually abused at least 177 students during his time at the school.

Richard Strauss was a physician at OSU from 1978 to 1998 who was responsible for the medical care of student-athletes. An independent investigation found Strauss repeatedly groped dozens of male athletes and other students over the two decades he worked for the school.

In OSU’s annual crime report released this week — which includes crimes reported that year, not just those that occurred that year — the university received nearly 1,500 reports of fondling and nearly 50 reports of rape tied to Strauss.

Among those victims is FOX 17 Morning Anchor Mike Avery, who spent four years playing lacrosse for the Buckeyes in the late 1980s. The abuse was a secret Avery kept to himself for over 30 years — until now.

He will be among several other former Ohio State athletes interviewed and featured in a report on NBC Nightly News Thursday night detailing Strauss’ abuse.  But Avery wanted to tell his story first to FOX 17 viewers.

“It certainly isn’t easy and honestly; I don’t know what to expect. Especially in West Michigan,” he said.

The secret came with embarrassment and shame for over 30 years.

“I did, I just buried it, because who was I going to tell?” he said. “You look at us, we’re all Division I athletes and this doctor is doing these things. And people would say, ‘well, why didn’t you just knock him out?’ He had the power.

“He was this doctor who was put there by the university to take care of us, so when this is happening, I thought if I say anything, he can take away everything that I’ve worked for.”

Avery first walked onto the campus of Ohio State University in fall of 1987 as a scholarship athlete.

Lacrosse was part of his path to becoming a broadcast journalist, which meant he would have to rely on a team doctor for medical care.

“Dr. Richard Strauss was our team physician, so if we had any kinds of injuries, physicals, he was the guy that we had to see,” Avery said.

Strauss already had a reputation on campus.

“One of the things that was known was Strauss would always be in our shower, our locker room shower room after practice, almost daily,” Avery said. “So it was a thing for us guys on the team to try and get in and out of the shower before Strauss was there, because it was really creepy, he would be standing in there as we were coming in, in just a towel, and taking our showers, he’s watching us.

“It was pretty creepy to have your team doctor just staring, just watching you.”

For Avery, it was the first time he had a physical exam away from his Syracuse home.

“As a freshman, it was interesting that I had never had a physical away from home like that. So, I was already hearing from teammates, guys who had been there a few years, that Strauss’ physicals were a little bit different,” Avery said. “So, I had no idea what that meant until I actually went into the training room.”

By the time Avery got to campus, Strauss had already been working for Ohio State for nearly a decade. He had the authority to decide if Avery could continue playing lacrosse and following his dreams.

“I was a poor kid, so I’m in school, and being able to play lacrosse allowed me to do that,” he said.

Strauss would regularly abuse that authority.

“He (had) the ability to stop me from being a part of my lacrosse. All he has to do is say, ‘hey, Mike’s not fit to play,’ and that’s it,” Avery said.

The abuse continued for years.

“I had to see him for physicals four years, the four seasons I played. and he would molest me every time, every year,” Avery said.

“My sophomore year was the year that it got way more intense,” Avery said. “I went into the training room; he shuts the door. He’s in there by himself, it’s just me and him.

“He doesn’t have any gloves on, he’s not wearing a stethoscope, and has me take off my shirt and hop up on the table, and while he did that, he was trying to have a conversation with me. And then he basically walked over to the table where I was sitting, kind of spread my legs and began to rub my chest and my back without gloves.”

It continued from there.

“After that, he said, ‘could you stand up and drop your shorts?’ So, I did that, and while I was doing that, he reached over and got a stool and pulled it over to where I was standing,” Avery said. “So, I’m standing naked and he basically slides up where his face is right in my groin.

Avery was cleared to play but the impact of what happened in that room was far from over.

“When I left, I was pretty confused about what had just happened and why this happened and I remember saying to one of my teammates when I came out I said, ‘I feel like I’ve been assaulted,’ but I didn’t say anything more about it for 30-something years.”

Now — as a survivor — he’s breaking his silence and finding strength in the hope for change.

“If somebody wrongs you, you need to speak up and do something about it. I didn’t. I kept it to myself for 30 years. So, it’s important that you speak up and say something,” Avery said. “My kids are teenagers. In a few years they’re going to be on a college campus.

“There’s got to be some kind of a platform, something done out there that can say ‘hey, I’m going to send my kids off to school and they’re going to be safe.’ And the school that they choose is going to take care of them and that did not happen in this case.”

Strauss remained on staff at Ohio State several years after Avery graduated. He was eventually suspended in January 1996 after a student accused Strauss of fondling him during an examination.

Evan after the suspension, Strauss opened a private “men’s clinic” by campus where he continued to sexually abuse OSU students. He retired from the university in 1998 when he received emeritus status from OSU — a prestige he held until he died by suicide in 2005.

Strauss has since been stripped of his university honors.

Earlier this year, the findings of an independent investigation ordered by the university were released. The investigation found at least 177 students had been assaulted.

“It makes you question who you are as a person. ‘Why me? Why did he pick me?’” Avery said. “But now, after the report came out, it wasn’t just me. there were a lot of people and it’s terrible. It makes me angry.”

Especially now, realizing the impact it had on his life through the years.

“I think the average age of the victims involved in this is around my age, 50 years old. So you’re talking about going back into my 18-, 19-, 20-year-old brain and trying to understand why I didn’t do more, why I didn’t say anything. I was basically just trying to survive."

Avery said he's now realizing the effects of the trauma.

He said he is confronting the trauma he has carried for so long to teach and empower those who are trying to find their voice.

"It forced my hand and now it's forcing me to deal with it, and it hasn't been fun," Avery said. "But it needs to be done so that if other people are dealing with the same thing and go, 'hey, Avery just did it, I can do it too.

"... If I can help one person either speak up, say something, cry foul, then I've done my job."

"On behalf of the university, we offer our profound regret and sincere apologies to each person who endured Strauss' abuse. Our institution's fundamental failure at the time to prevent this abuse was unacceptable - as were the inadequate efforts to thoroughly investigate complaints raised by students and staff members."

Sexual assault victims can get support and resources by calling the National Sexual Assault Hotline at 1-800-656-4673 or the YWCA at 616-454-9922. The Child Advocacy Center of Kent County is also a good resource for parents with children who are victims of abuse.