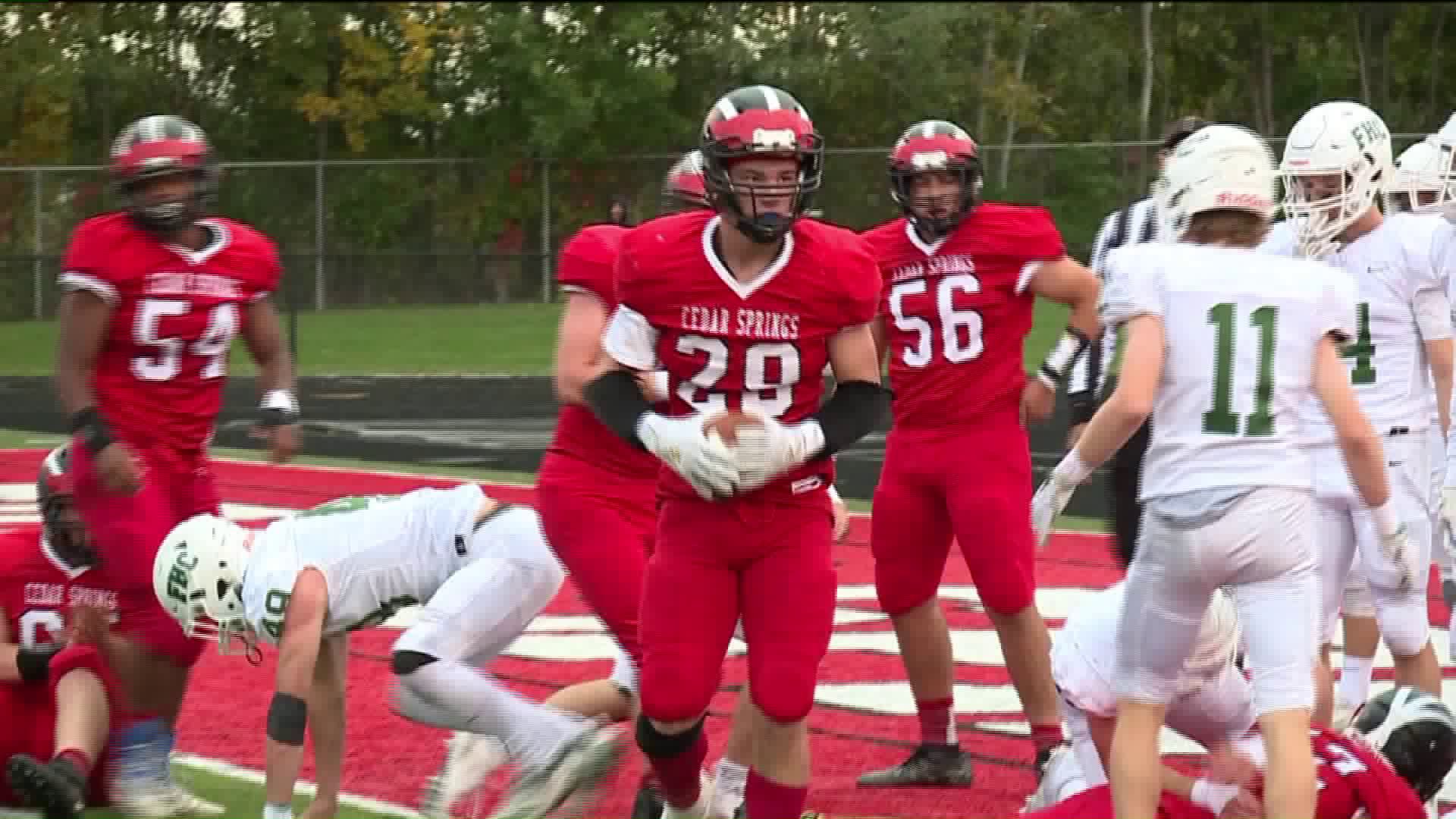 CEDAR SPRINGS, Mich. — Cedar Springs dominated on both sides of the ball in a 30-6 win Friday night against Forest Hills Central.

The Red Hawks held the Rangers to just 134 yards of offense and forced three turnovers in their fifth win of the season. Heading into the game, the focus was supposed to be the Red Hawks offense against what had been a stifling FHC defense.

But it turned out to be the opposite.

“We established that we can play against any lineup and as long as we can play our game, we can win,” senior lineman Seth Almas said of the defense’s performance.

Last week, the Red Hawks struggled to get stops in their 48-39 win over Allendale.

“After last week, I’m really pleased because we couldn’t get a stop last week against Owen Burk and Allendale. Our defensive staff did a great job,” head coach Gus Kapolka said. “We threw some tweaks at them tonight, we did some odd-front stuff that we typically don’t do and I think it threw them off balance there in the first couple series and we were able to score early and play with a lead from there.”

Cedar Springs jumped on the board first when junior quarterback Jeremy Campione found senior tight end Nate Webb on a 17-yard pass over the middle in the end zone. Campione also converted the two-point conversion to give the Red Hawks an 8-0 lead with 2:27 to go in the first quarter.

Senior fullback and defensive back Ben Shaw said the quick start was what they wanted heading into kickoff.

“Just to start off and punch them. That’s all we had to do is just start hot and finish hot. We started hot and in the second half we held them to six, so that’s how we do it,” Shaw said.

The Red Hawks’ defense forced and recovered a fumble on the FHC’s 28-yard line a few minutes later, and quickly turned that into points.

Brunin scored on a 1-yard run and Cedar Springs converted the two-point conversion again by catching a tipped pass. At halftime, the Red Hawks held a commanding 24-0 advantage.

FHC regained some momentum coming out of halftime by marching down the field on their opening drive and finishing it off with a 33-yard touchdown pass from junior Carson Mocherman to senior wide receiver Hayden Sarjeant. Cedar Springs’ lead was cut to 24-6.

FHC wouldn’t have time to make a comeback thanks to a dominating performance by the Red Hawks’ offense. Cedar Springs responded to the touchdown with an 18-play, 89-yard drive that took over 11 minutes off the clock and ended with a touchdown run by Brunin.

It was the final score by either team.

Kapolka credited preparation and knowledge of the system for having so many guys capable of filling in on offense.

“When we have as many guys hurt as we did early in the season, you’re just kind of grabbing guys and throwing them in and it’s beneficial that we have guys that have played in the offense now since the fifth grade, so they’ve been running the same plays the same way for a long time,” Kapolka said.

Cedar Springs will take an undefeated conference record against to Lowell next week — a place the Red Hawks haven’t won at since the 1970s.

“Lowell is a rival for us, it’s always a big game,” Kapolka said. “They’re obviously much-improved from last year. That’s a program that was never going to stay down for long. They’re really doing some good things; they look like an old school Lowell team.”

Almas is treating the matchup with Lowell like any other game.

“It’s as big as every other game, we just gotta prepare one at a time,” Almas said.