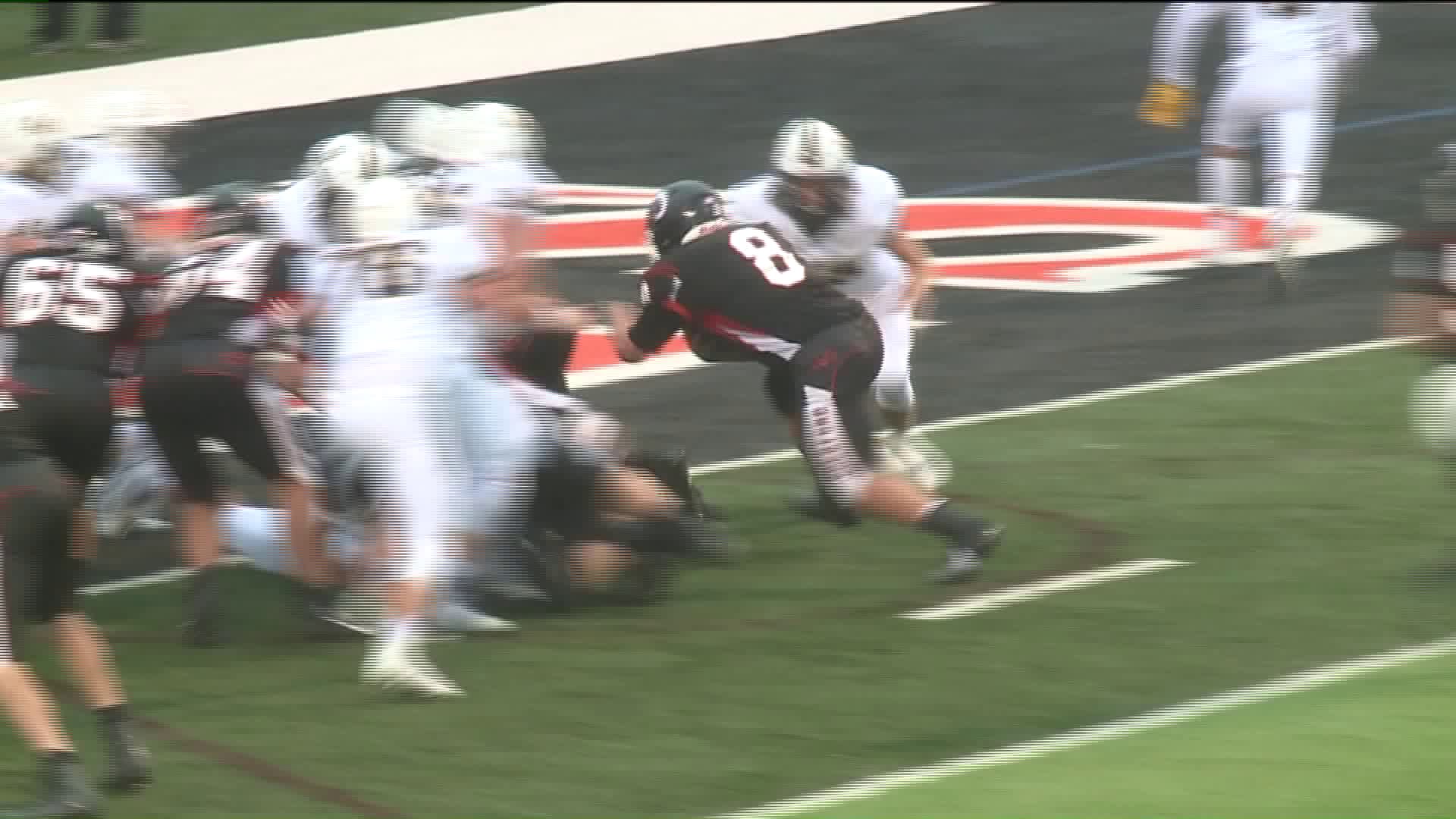 ROCKFORD, Mich. — Rockford’s defense brought Hudsonville to a halt in a 17-7 win Friday night to help the Rams stay undefeated.

The Rams forced several turnovers and shut down everyone outside of Eagles quarterback Ike Irish.

“We knew he was the real deal and we had to play our A-game to beat him,” senior defensive lineman Reid Nicholson said. “I feel like we played one heck of a game and we played it like Rockford plays it.”

Ball security was an issue for Hudsonville in the first quarter as they lost two fumbles.

The most costly mistake of the first half for the Eagles came on a high snap during a punt that set up the Rams on the 3-yard line. A few plays later, junior quarterback Chris Corey found the end zone to give Rockford a 7-0 lead on a 1-yard sneak.

“Very happy (with how defense played). And we were able to cash in on mistakes, that’s always huge,” head coach Ralph Munger said.

Both teams struggled to move the ball down the field and neither had a chance to score until Rockford lined up a 48-yard field goal attempt after recovering a fumble midway through the first quarter. Unfortunately for the Rams, the kick was no good and the score remained 7-0.

On Irish’s next carry, he broke through for a 30-plus-yard gain deep into Rockford territory. But the Eagles once again put the ball on the ground, giving up the field position back to the Rams.

Hudsonville’s special teams made up for the snap issues early in the second quarter by blocking a punt and returning the ball to the 4-yard line.

Irish found the end zone on the next play, tying the game at 7-7 just over two minutes into the second quarter.

It took another seven minutes for another point to go up on the board, which came off the foot of junior Rockford kicker Teagen Lenderink, who connected on a 28-yard attempt to give the Rams a 10-7 lead.

Midway through the third quarter, the Eagles’ fumbling issues came up again when Irish couldn’t corral a low snap. Rockford recovered the fumble at the 3-yard line to set up another short touchdown drive.

This time, senior running back Jaiden Friesen found the end zone for the Rams to extend their lead to 17-7.

Hudsonville put themselves in a good spot to immediately respond to the touchdown by returning the kickoff to the Rockford 44-yard line, but the Rams’ defense stepped up again.

Rockford will take on Grandville on the road next week and finish the season at home against East Kentwood.

“We’ve got a tough schedule ahead, so we’ve got to keep our heads straight and play our game,” Nicholson said.