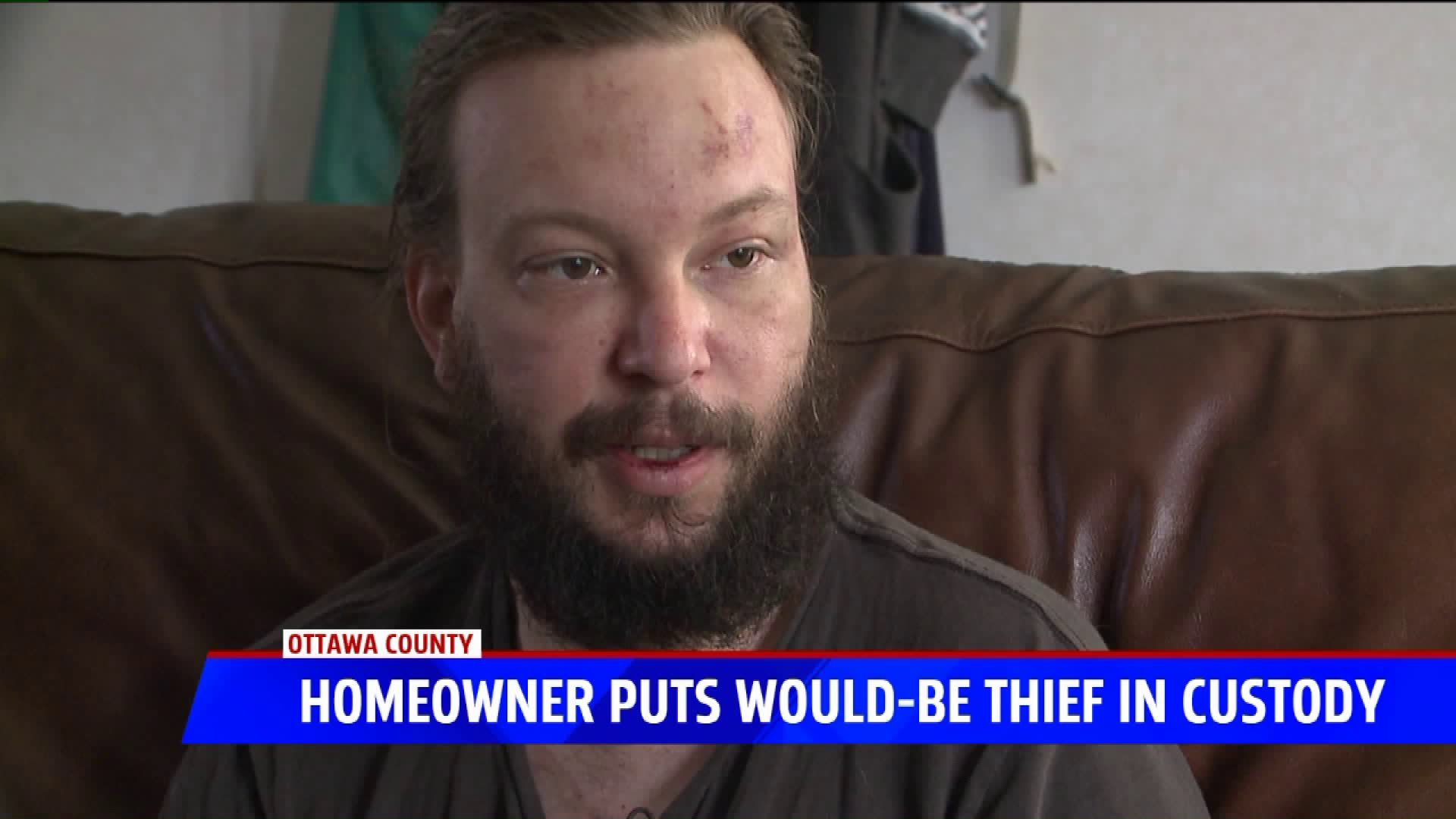 OTTAWA COUNTY, Mich. -- His body is bruised, but Gage Slaughter says the pain is worth it. Wednesday night, he says he made a split second decision to confront a man rummaging through his fiancee’s car in the driveway in West Olive Estates.

Slaughter says the suspect used the car door to knock him off balance and start his attack.

"Ripped out big 'ole chunks of my hair and just pretty much (got) beat on, kickin' and punchin', biting and trying to gouge eyes out," he explained.

“Let him beat me harder next time. I’ll still hold on just the same," Slaughter said.

When asked what was going through his mind during the attack, Slaughter replied, "Stop him. Stop this from happening further. If it’s not me, it’s somebody else."

He continued, "I’ve got a nice lil old lady that lives across the street. I’ve got wife and kids here. What? If I can’t feel safe in my own neighborhood what’s the point?”

Determined to not let him get away, Slaughter held on as his fiancee called 911. He says a second suspect refused to join the scuffle and drove away in another vehicle, but Slaughter’s roommate did jump in.

"He bit my roommate all up through here and drew blood and everything," he pointed.

“The way he was hittin’ I’m not entirely sure how much longer I could have been… awake through it,” Slaughter said.

When Ottawa County sheriffs deputies arrived to Royal Scot Way, Slaughter was still holding onto that first suspect. The second was stopped nearby in what turned out to be a stolen pickup truck.

In the back of that truck were bikes stolen from Cross Country Cycle. Bennett says the suspects led them to a total of seven stolen bikes, and other items were found in the truck.

"So a lot of different criminal activities seemed to have come together with the identification of these two and the apprehension of these two," Bennett said.

While he's not faulting Slaughter, Bennett says a confrontation isn't advised. Instead, he says call 911 and be the best witness you can.

When asked if he'd do anything any differently, Slaughter responded, "No."

“Maybe protect the money maker a lil bit," he chuckled. "But no. Not really. I can’t sit by and let evil happen.”

The sheriff’s office continues to put the facts of the case together to send over to the prosecutor's office for review for charges.