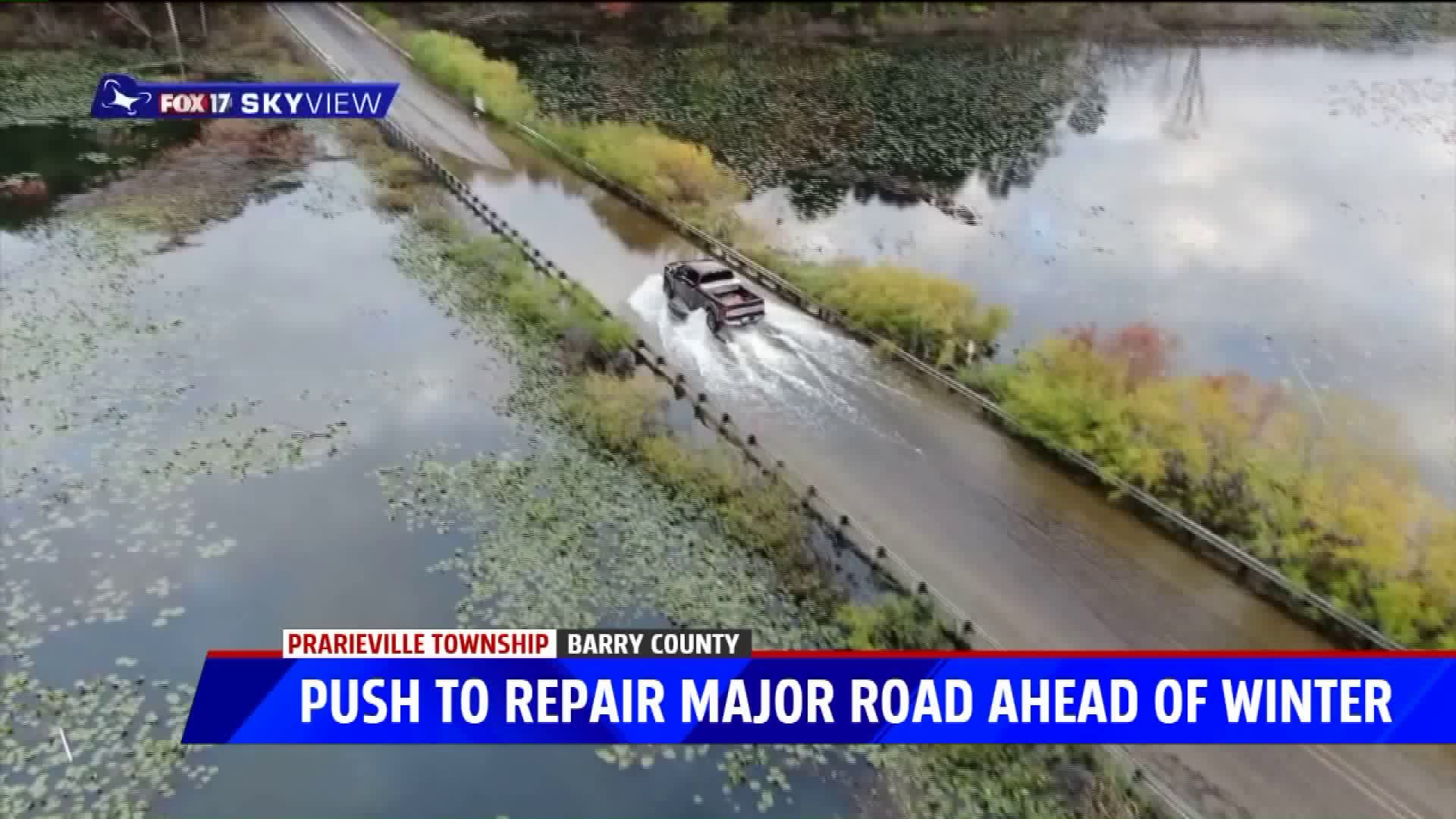 PRAIRIEVILLE TOWNSHIP, Mich. — Nancy Lott typically takes 3 Mile to get to US-131 to head to Mary Free Bed Rehabilitation Hospital in Grand Rapids.

She travels there a few times a week for treatment. However, lately, it's been difficult  getting there.

Floodwater covers part of the road where it intersects Doster Road, she said.

“The last time we went through you could see the road is crumbling underneath,” Lott said during an interview with FOX 17. “It's deteriorating. So the longer they let it go the more it’s going to cost to fix the problem.”

Lott said the road is surrounded by ponds on each side. Two years ago, the water began covering one lane. This year, it's gotten worse.

It gets even worse in the winter, Lott said. When the water freezes she travels six miles out of the way to get to US-131.

“My biggest concern is in an emergency situation having 911 needing to get to not just me but somebody on this road and going the back roads could add another 10 minutes to their arrival and somebody could die," she said.

Since mid-September, Lott has called the Barry Couny Road Commission four times, she said. During the last phone call she was told that they were working on it.

“It kind of ebbs and flows. Sometimes it comes up. Sometimes it comes down, obviously based on rain,” said Jacob Welch, director of operations for Barry County Road Commission. “We’ve had an inordinate amount of rain this year. And we keep looking at them, keep checking on them.”

Welch said the road commission has been monitoring the problem consistently. Last year when the water came up over the road, it receded during the dry season of late summer and early fall.

This year that didn’t happen, he said.

“The biggest problem is because it’s on a swamp,” he said. “If we go and just raise the road with asphalt a foot, we have a potential with the amount of weight from the asphalt to sink that road and it could literally just disappear.”

That’s not what they want to happen, Welch said. They don’t want to create further problems. So they’ve reached out to soil and material engineers to take an in-depth look at the problem.

“They’re going to be coming down next week to do some sub-surface investigations for us so that we can get a design together to determine whether the cost outweighs the benefit or the benefit outweighs the cost to make sure we’re doing the right thing in that location,” Welch said.

He said it’s the commission's full intent to have a good repair done before wintertime. However they won’t make a decision until they meet with the engineers and discuss the results. That meeting will determine how they’re going to fix the problem.

Lott, like many residents, hope something is done soon.

“I’ve been told that there are now minnows swimming across the lakes,” she laughed. “So it’s must be pretty deep.”