Our first flakes of the season may fly next week 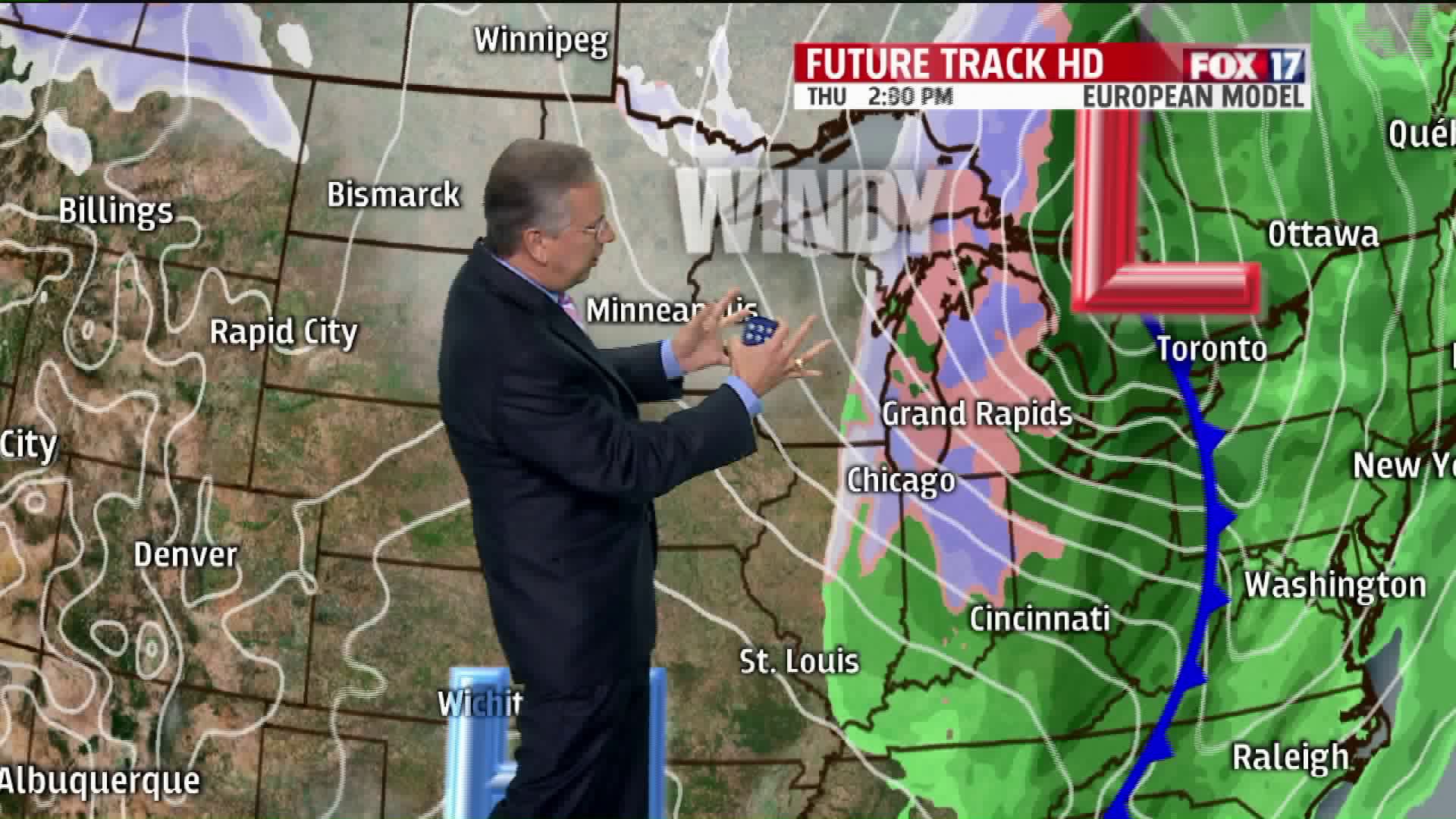 WEST MICHIGAN -- It's seems to be the dreaded "S" word that nobody wants to hear. Snow! The first question that usually follows is when. Our forecast models for the past few model runs are continuing to hint at the possibility of some flakes mixing in with rain showers next week...around or after Halloween. As usual, these forecast models never agree that far out, but most of them are plotting colder temperatures for the time frame. If we correspond those models with the Climate Prediction Center (CPC) forecast, it certainly lines up. See their graphic for the 8 to 14 day outlook below valid for October 31 through November 6. That's a 60 percent chance of below normal temperatures for Michigan below. The darkest blue bulls-eye is a 70 percent chance.

The next map below is valid for next Wednesday October 30. These are temperatures about 5,000 feet above the surface at what meteorologists call the 850 millibar pressure level. Notice the sharply colder (almost Arctic tones) colors on the map over the Northern/Central Plains, Midwest, and Great Lakes. Those purple/magenta colors translate to only 10 degrees above the surface. If this model, which is the GFS is correct, any precipitation we saw would (without question) be snow. Surface temperatures would only be in the 30s!

Like most things, there are usually two sides to every story. The other dependable long range forecast model we look at is the European Model. Below is their model for the same time frame next Wednesday morning. We can't show the temperatures due to copyright infringements, but I can tell you the colors over Michigan have temperatures above the surface around the mid 40s...quite a bit warmer. So there are certainly discrepancies between these two long range forecast models. That said, the main difference is the timing and the strength of the cold air. The European model plots temperatures at the surface later Thursday and Friday at around 15 degrees (not quite as cold as the GFS). The image below is from our in-house vendor and is the surface map for the European Model. Anything gray/green/yellow on the map indicates precipitation, but notice the blue and red lines. There's a huge dip or trough over the nation's mid section. Those are the colder temperatures coming our way. Those blue/red lines actually represent atmospheric thicknesses. The lower the thickness, the colder the temperature. The higher thickness means warmer temperatures. Thicknesses eventually moving into Michigan will be on the order of about 520 decameters. The freezing thickness line is generally around 540 dm. To understand more about what these mean, click here.

In conclusion, what seems to be a given is the arrival of some seriously unseasonably cold air next week...anywhere from Wednesday or Thursday and beyond. It may not stay long, but know that any precipitation we see during this time frame is more than cold enough to yield snowflakes (despite the warm ground). There may also be another strong wind field associated with this cold air and powerful fall system. That means more high waves and beach erosion on Lake Michigan! Additionally, accumulating lake effect snow is also possible behind the system. The thumbnail tied to this story is a snapshot from the European forecast model (at the surface) and is valid for Thursday, October 31 at 6 P.M. Note the position of the low, strong wind field with the gray isobars, and the "blue" or snow over Michigan.

The last image below is also from the European forecast model and is plotting total snowfall through next week Saturday. Note the bulls-eye of the heaviest snow behind this system will the colder air across northwest Wisconsin, through southeast Minnesota where a foot and a half could fall. There's also the chance of heavy snow here in Michigan across the northern lower peninsula where 6" to 10" is possible. Again, this storm system is still a long way off, but these are the current stats from the latest model run.

Make sure to stay up on later forecasts...especially next week. These forecast models typically come into "agreement" with one another as the event draws closer. Get the complete West Michigan forecast at www.fox17online.com/weather.