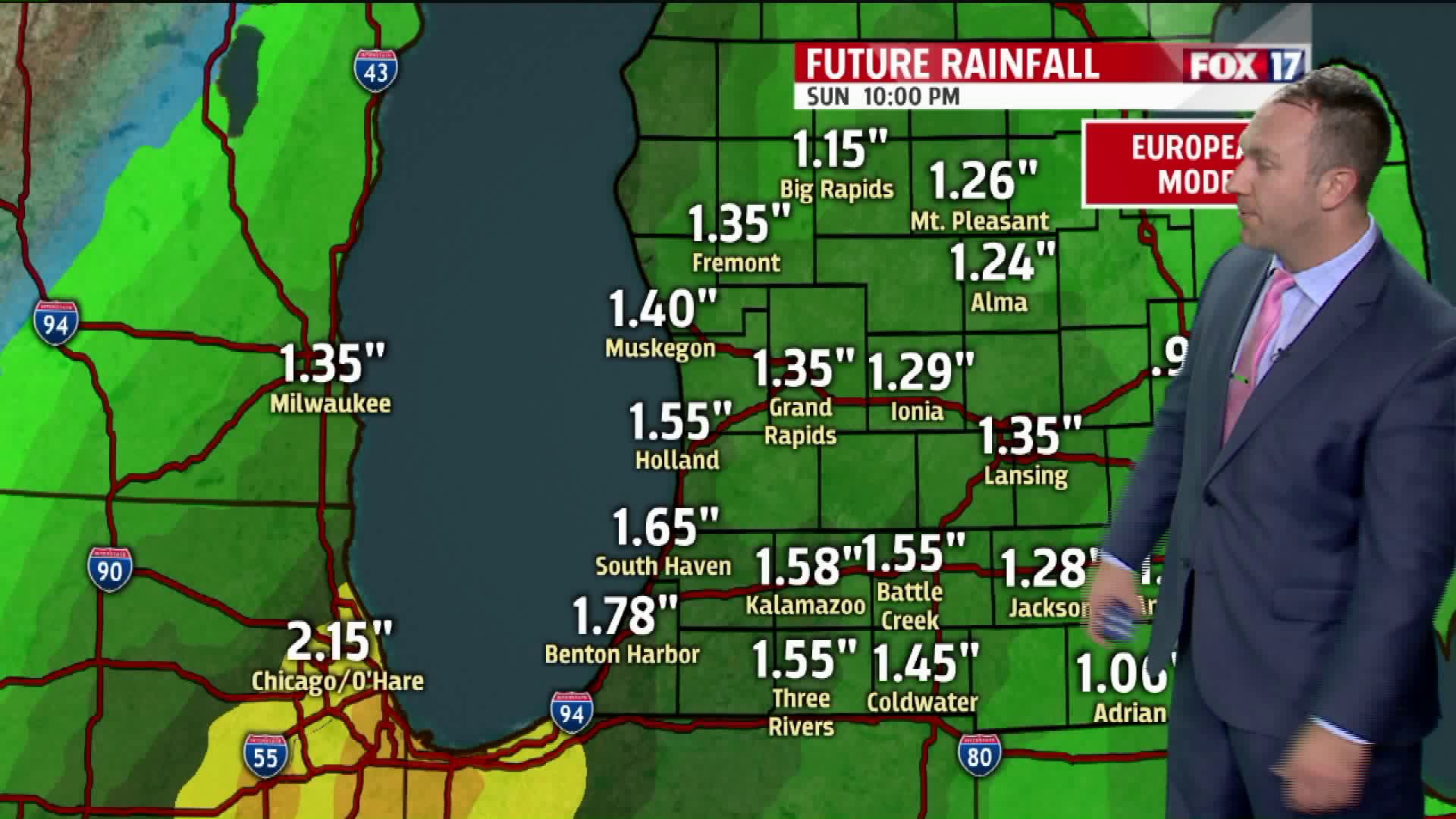 Any filtered or dimmed sunshine this morning is to be short-lived as clouds are increasing rapidly from the south leading to what will be a very soggy mid-afternoon and beyond here on the first half of our weekend.

A strong storm system is located late this morning near the area of where Missouri, Kentucky, and Illinois all come together and is lifting northward with copious amounts of moisture. This system is being aided by the remnants of Tropical Storm Olga which formed in the Gulf of Mexico on Friday afternoon. We look for the first raindrops to arrive in southernmost sections of the viewing area around the noon hour. Rainfall will continue to spread northward with wet weather arriving in Grand Rapids around 2-3 P.M. When rain does begin, it will not be stopping for quite a while as the precipitation shield with this system is quite expansive. Daytime temperatures look to spend most hours in the 40s to around 50 degrees. The heaviest rain is likely to fall between say 5 P.M. and 11 P.M. locally.

Activity will become a bit more periodic and lighter thereafter into the early hours of Sunday. Rain will completely end by around 6 A.M. Sunday. Total rain amounts will likely range between 1.00-1.50" with higher amounts certainly possible. Temperatures will reach their peak in the mid to, perhaps, upper 50s in the early overnight.

Another factor with this system will be increased wind speeds especially later this afternoon and evening out of a general easterly direction. The center of low pressure comes right at West Michigan later tonight into the overnight and as it passes by, winds will shift to the south and then west and go windy through the first half of Sunday. Waves will build along the Lake Michigan shoreline to between 6-9 feet for a period before settling down Sunday evening as winds relax. Sunday's daytime high temperatures will be in the middle 50s.

Monday appears to be a quiet day with partly sunny skies and highs in the middle to upper 50s. A cold front will be approaching on Tuesday and the risk for showers will increase once again. Highs on Tuesday will likely be in the first part of the day in the lower 50s. Much cooler air settles in for Wednesday and the chance for a few showers continues though no major upper-level forcing appears to be present so significant moisture is not likely. Highs on Wednesday land in the lower to middle 40s.

The main parent upper-level storm system will be slowly approaching from the Rockies on Thursday. A consensus of information takes the track of this system far enough west that we should see mainly rain on Thursday.

A transition to flurries or snow showers can occur Friday morning at some point. Stay tuned as we are still far enough away from the event for significant changes to be made to the forecast. As of right now, however, accumulating snow of significance looks most likely to occur out to our west through Wisconsin stretching south and west into Iowa or northwestern Illinois. One thing that appears to be a certainty is another round of high winds Thursday into Friday with the biggest impacts along Lake Michigan in the form of waves and beach erosion likely to occur on Friday into next weekend.