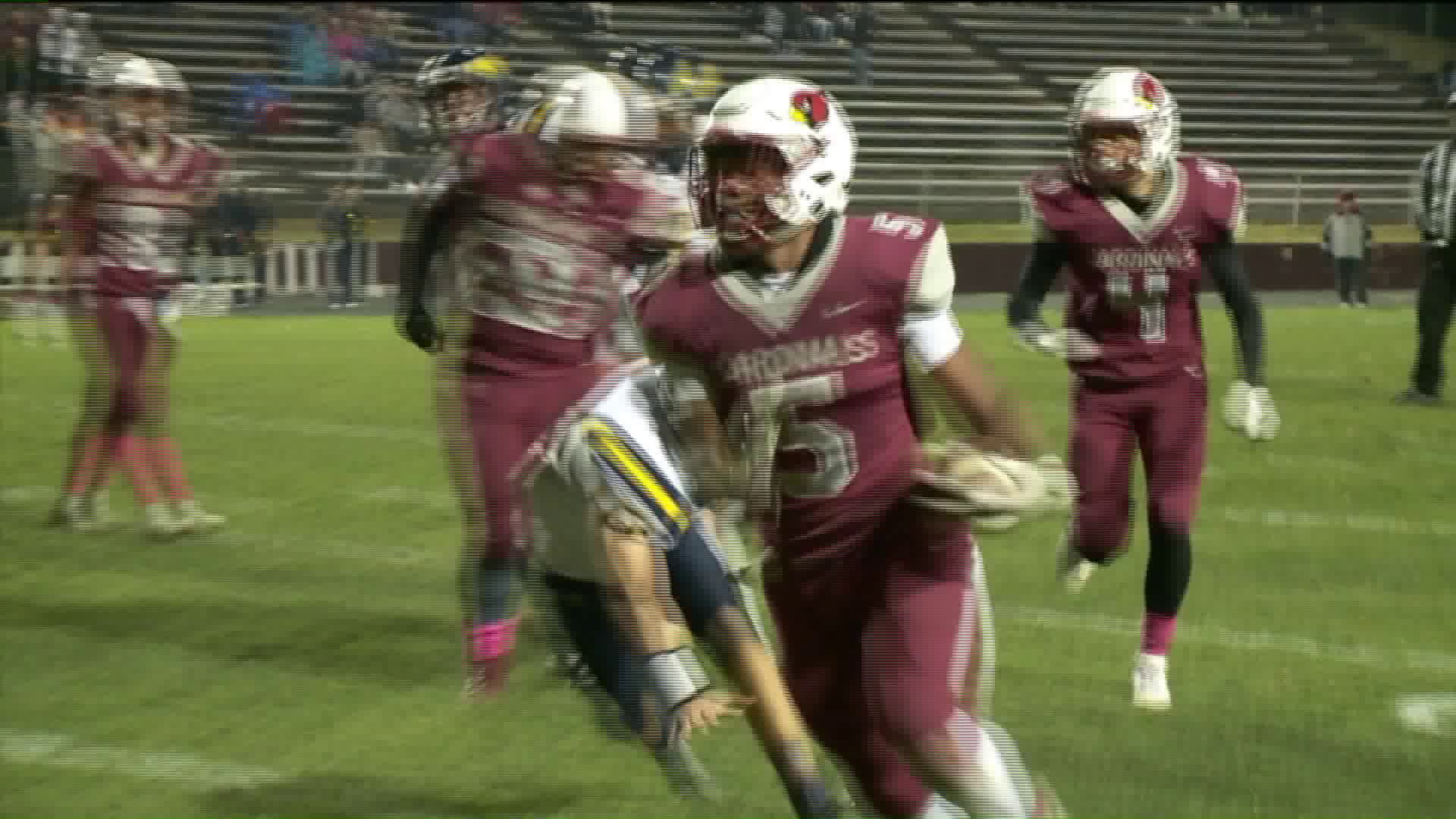 After finishing 2-7 last season, head coach Fred Rademacher quickly turned the program around in his first year on the job. It was the Cardinals’ first undefeated regular season in over a decade.

“I knew this was a good football school and football community, a lot of legends from here,” Rademacher said. “I thought the building blocks were here. Came here, got to work and got better.”

Orchard View’s offense was led by a balanced rushing attack from senior Edmari Mitchell and junior Brendan Hyatt, who ran for 164 and 122 yards respectively.

Mitchell gave credit to his offensive line for his big game.

“I put all the credit on our O-line, they did everything for me today,” Mitchell said.

The Cardinals got off to a hot start on the first play of the game when burst through the line and broke off a 43-yard run. Although North Muskegon was able to get a fourth down stop at the 2-yard line, the Cardinals would soon find the end zone anyways.

Orchard View recovered a fumble on North Muskegon’s ensuing drive and marched down the field, capping off their drive with a 4-yard touchdown run by senior Mitchell. The Cardinals converted the two-point attempt on a pass to senior Alex Andrews to take an early 8-0 advantage.

North Muskegon’s next drive ended when Andrews picked off a pass and returned it to the 32-yard line, setting up another touchdown drive finished off by a Mitchell run. The Cardinals converted the two-point attempt again to take a 16-0 lead.

On the ensuing kickoff, the ball bounced off a North Muskegon player and was recovered by Orchard View.

Hyatt and the offense would capitalize on that opportunity with a drive that ended in a 4-yard touchdown and a two-point conversion. The game appeared to be headed for a blowout as the Cardinals held a 24-0 advantage early in the second quarter.

However, North Muskegon would charge back to make it a game relying on the arm of senior quarterback John Hayhurst.

Hayhurt and the Norsemen responded to the third touchdown with a score of their own by throwing the ball downfield and finishing it off with a quarterback sneak. A failed two-point attempt would make the score 20-6 with just under five minutes to go in the first half.

North Muskegon was knocking on the door again at the end of the half, but the drive came to a halt when a tipped pass got picked off by Hyatt.

The lone touchdown of the third quarter came from the Norsemen as time expired when Hayhurst found the end zone on a 4-yard run. North Muskegon would go on to convert the two-point attempt to bring the score to 24-14.

Orchard View put the game out of reach nearly midway through the third quarter when Mitchell scored his third touchdown of the night.

The Norsemen scored one final time on a 48-yard pass from Hayhurst, but the comeback effort wasn’t enough.

Mitchell said the difference between this and last season for him was hard work.

“Hard work man, I’ve never worked so hard in my life,” Mitchell said. “This year, I really wanted to win and Coach came in and gave us a good push and that’s exactly what we needed.

He wanted to finish his high school football career with improvement.

Rademacher is feeling good about an undefeated season but is turning his focus to next week’s playoff game.

“Feel great about it. 9-0, there’s no better feeling,” Rademacher said. “We just gotta come back next week and get better and see how far we can take this thing.”

Playoff matchups will be announced during the selection show on Fox Sports Detroit+ this weekend.