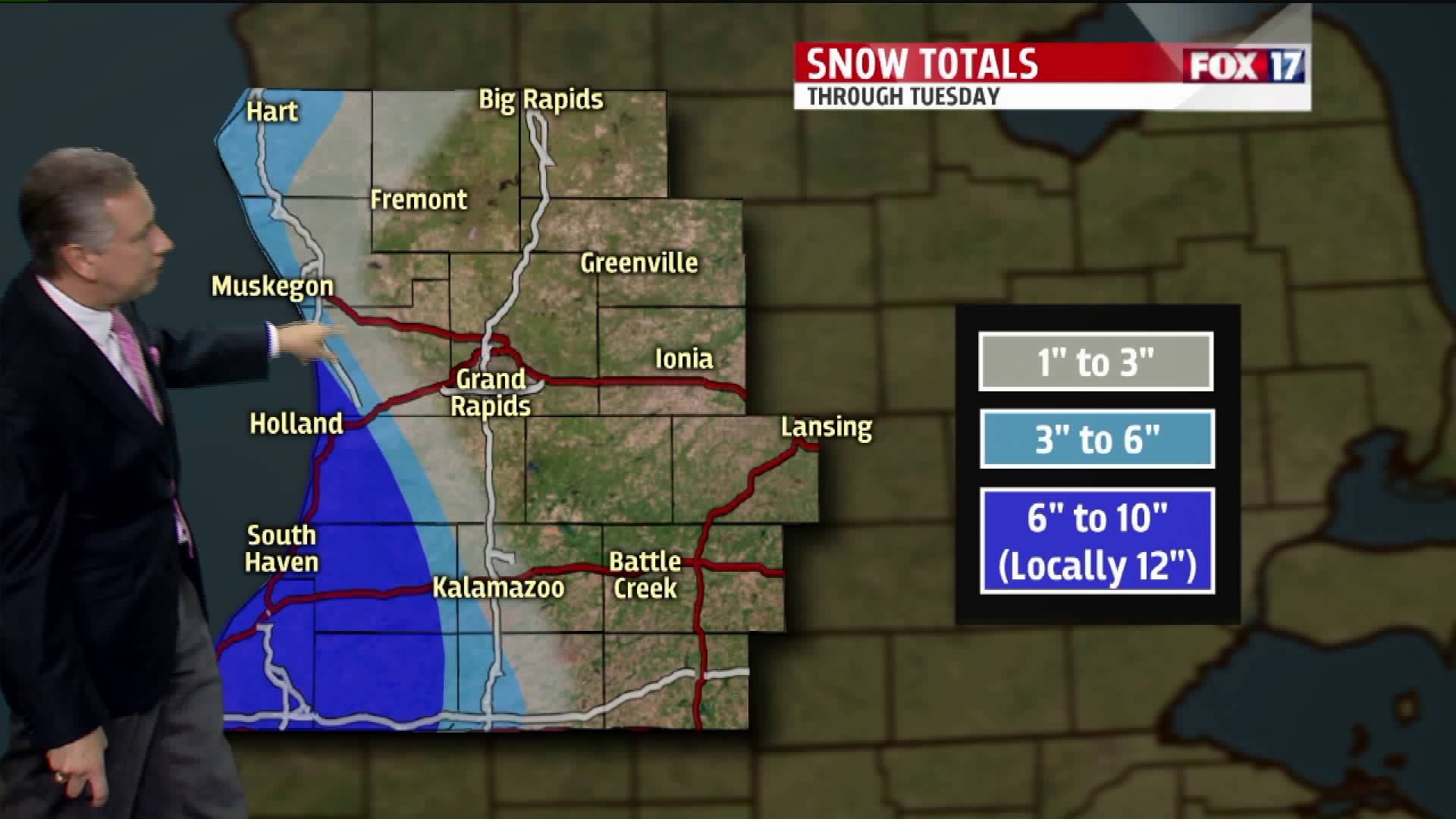 WEST MICHIGAN -- After a pretty fair accumulation of widespread snow across the area Monday, heavier lake effect snows along the immediate lakeshore will add significantly to those totals (which were mainly between 2" and 6"). Places along the lakeshore from Holland, to South Haven, to Benton Harbor will be racking up totals of a foot or more through Tuesday. Travel to/from Chicago via 196 is NOT advised on Tuesday! Take a look at some of those initial snow totals below.

Arctic air moving over the warmer waters of Lake Michigan is the cause of this second stage of snow for lakeshore areas. Monday's snow was NOT lake effect, but generated from a strong low pressure system moving into Ohio and the Northeast United States. We have WINTER STORM WARNINGS posted for Allegan, Van Buren, Berrien, and Cass Counties through 5 P.M. Tuesday (in pink). The heaviest snow will fall there. WINTER WEATHER ADVISORIES have been posted through 5 P.M. Tuesday for Oceana, Muskegon, and Ottawa Counties. About 3" to 6" will fall in the western portions of those counties. See map below.

1" to 2" snowfall rates per hour along with brief white-out conditions in the areas under the warning. The highest snowfall totals will occur from Holland, to South Haven, into Benton Harbor. See totals map below. Areas along and east of U.S. 131 will only see a dusting to less than an inch with flakes/flurries likely.

Below is a map of current temperatures as of Monday evening. Notice that most of the United States is sharing in this Arctic outbreak. I would expect hundreds of temperature records to be shattered. Our coldest high temperature for November 12 (Tuesday) is 27 degrees in Grand Rapids. We're forecasting 23.

I've assembled some of the more important bullet points that we should highlight. See graphic below. Make sure to bundle up the kids at the bus stop Tuesday and Wednesday morning with wind chills between zero and +5.

Another clipper system arrives Wednesday evening/night that may drop another 1" to 2" across the area. By Thursday, our temperatures are expected to moderate into the mid 30s. Get the complete West Michigan forecast at www.fox17online.com/weather.