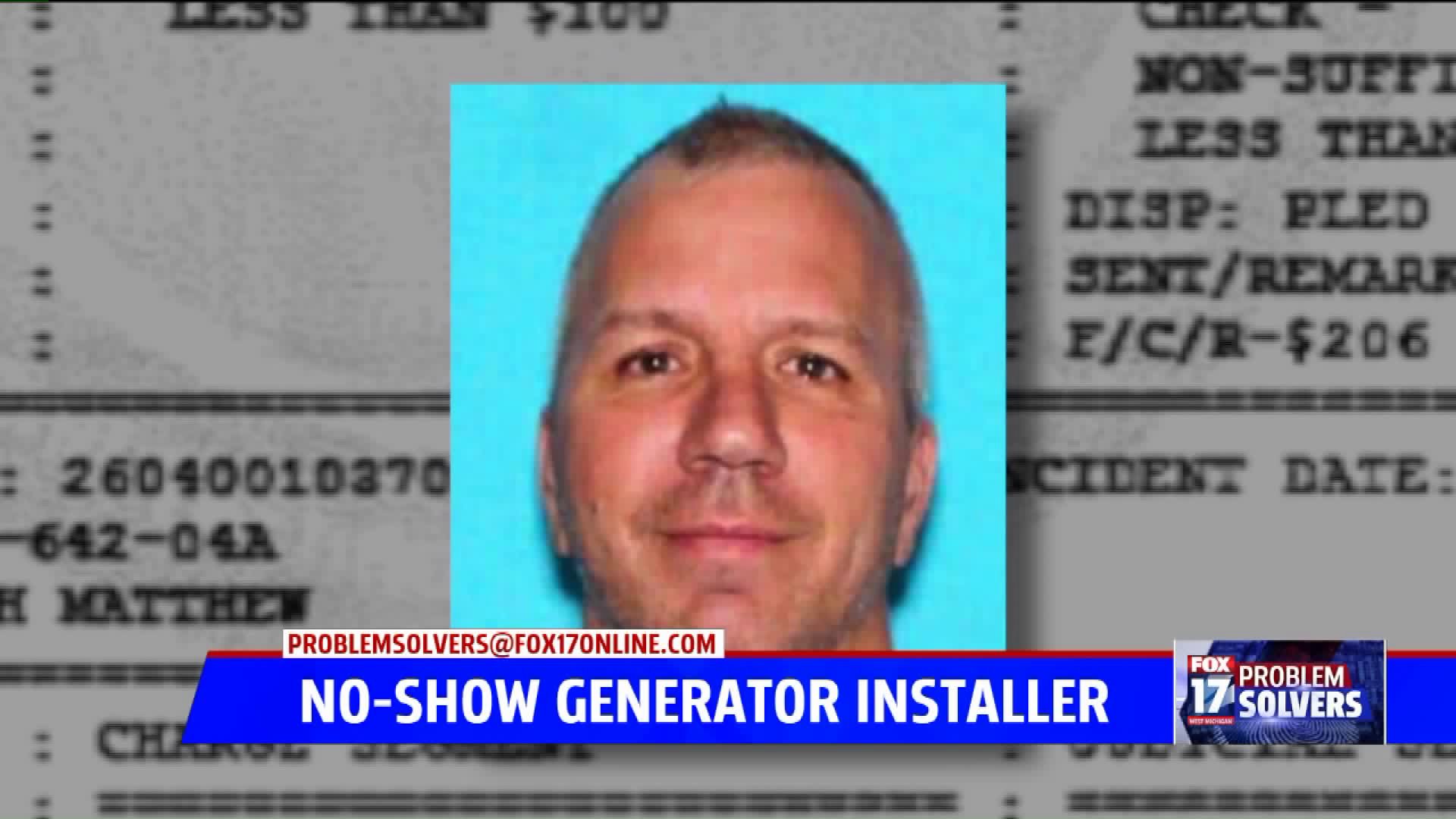 SPARTA, Mich. -- Deb Wagner says she hired an electrician who shocked her by betraying her trust. In March, she made a $4,510 investment in a generator. The registered nurse, who works from home, says she knows what it’s like to lose power.

“Without power, I can’t work. I don’t get paid if I don’t work," Wagner explained.

“I have family members that have generators, and they recommended the Generac. So I went on their website and requested a price, and that’s when they contacted me within a day or two and said they’d send out two of their dealers," she said.

Wagner picked electrician Joseph Shields. She says he gave a cheaper quote on the installation.

“He mentioned he has a wife and four children, go to church every Sunday, ya know, and I just wanted to give him my business," she said.

So she wrote Shields a check for $4,510. That amount was just for the purchase of the generator. Shields was supposed to buy it and installing it by May. He would then get paid for installation which, to this day, never happened.

Over the past six months, Wagner says Shields has either been unresponsive or he’d promise to come out on a particular day. But she says it's always been 'no call, no show'.

She says she called Generac.

“And they assured me that there’s nothing wrong, that he was just probably busy and would get back to me as soon as possible," Wagner recalled.

But she says the company wouldn’t confirm if Shields actually purchased the generator because it was a 'privacy issue'. Finally, Wagner says she asked Shields to drop it off last month.

“He sent me a text that he was on his way to his shop to get the generator, and then I've never heard from him since," she said.

So Wagner reached out to the FOX 17 Problem Solvers for help.

FOX 17 tried leaving a voice message for Shields, but his mailbox was full on Thursday. That same day, we left a message on his wife's cell phone which is listed in the paperwork. On Friday, we were able to leave a message in his voicemail. Shields and his wife haven't returned the messages.

FOX 17 stopped by addresses listed for Joseph Shields in Cedar Springs and Sparta. No one appeared to be home during either visit.

We did find he has a criminal record. He's a registered sex offender and also pled guilty to check fraud and domestic violence. Records also show thousands of dollars worth of civil judgments against him.

Much of this was news to Wagner.

"I'm hoping that he'll do the right thing. Either give me my money back or bring me the generator, and I'll find somebody else to install it," Wagner said.

Thursday, FOX 17 reached out and spoke with a representative of Generac. The company started looking into the situation immediately. Friday, the company said it will give Wagner a generator. We'll keep you posted.