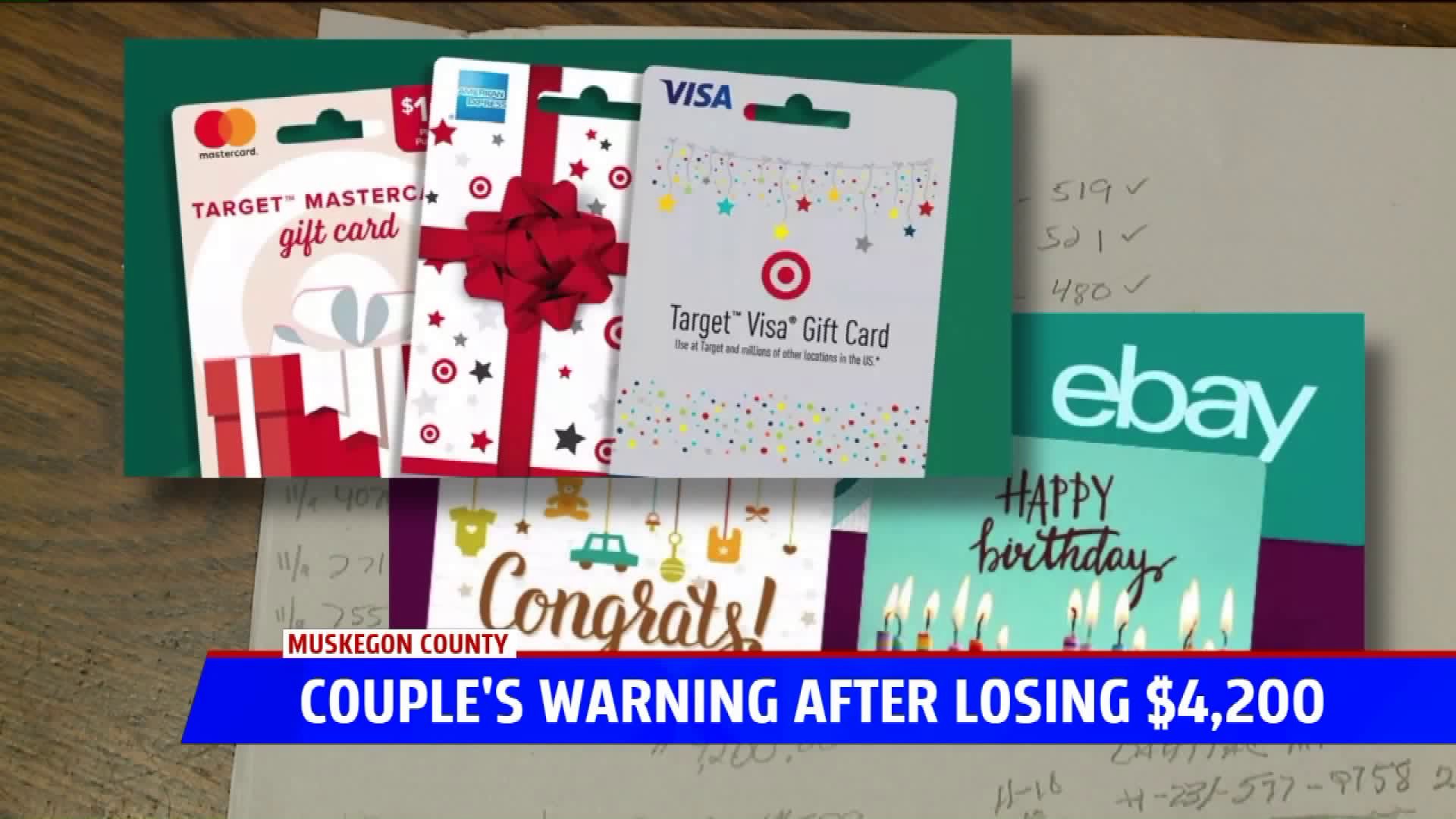 FRUITPORT TOWNSHIP, Mich. — Ann and Lynn Raymond say they received a phone call from "Apple support," or so they thought.

Within a couple of hours, they say they gave $4,200 worth of Target and eBay gift cards to the caller.

"I was devastated because they had taken all our money. They had maxed out all our credit cards," Ann Raymond said.

On Nov. 8, the Fruitport Township couple says the phone call came in at 10 p.m.

"They had me turn on my computer, get into the Apple support app," she said.

The caller convinced her she'd been hacked, and she could pay him with gift cards to fix it. He told her and her husband to drive to Walgreens and two different Meijer locations. The Raymonds say the caller stayed on the phone with them the whole time and instructed them to buy each gift card, nine total, in separate transactions.

The Raymonds then gave the caller the financial information on the back of the gift cards and were told to tear the cards up, along with the receipts.

"So, as we were doing this we were tearing up all the receipts and the cards after they were used," Ann Raymond said.

"Again, I didn't think nothing of it," she said.

The caller promised the (phony) hacks were being fixed the whole time. But feeling uneasy afterwards, Raymond decided to call Apple support the next day — the real Apple.

"And that's when I knew it was a scam," Raymond said.

The Raymonds say they also fell for it because the caller only asked for the last four digits of their credit cards and promised from the beginning, that the gift card money would be refunded to them. That wasn't the case, so they filed a police report.

"The officer came to the house, took our report and also said he had just come from another home with the same exact issue," she said.

"We just want to reach out to everybody else to keep their eyes out because there is people out there scamming," Lynn Raymond said.

He added, "A lot of seniors out there and they're getting scammed."

In this case, Apple would not have initiated contact. Also, the Raymonds say their credit card companies couldn't do anything for them.

The bottom line: if someone calls you telling you to pay them in gift cards, for any reason, don't do it. Fruitport police say senior citizens are often the target of various schemes, so look out for your loved ones.